At Macrina, we are increasingly turning to freshly-milled local flours. Both of our newest loaves, the Skagit Valley Sourdough and our Whole Grain Baguette sold at PCC Natural Markets, are made exclusively with locally grown wheat and freshly-milled flours.

Twenty miles to the northeast of Walla Walla is the small town of Waitsburg, once a mill town. Now, it’s better known as a side trip for epicures out on a food and wine tour of Walla Walla. A summer drive there takes you through some of the most scenic wheat country: soft undulating Palouse hills covered in golden wheat, glimpses of the distant blue mountains, a gently winding road, and weathered grain silos.

The History of Mills

Until 2009, the old mill loomed at the end of Main Street. Then, it burned to the ground in a mysterious fire. The mill was just one of the three early mills still standing in the state when it disappeared. At one time, there were nearly 160 mills in Washington State. The mill that Sylvester M. Wait built in 1865 preceded the town that grew up around it, employing generations of millworkers until it closed in 1957.

Though not native to the state, wheat thrives in Washington. It was first planted at the Hudson Bay trading post at Fort Vancouver in the 1820s. Early settlers learned that the soil and the climate made for abundant harvests. As the state’s population boomed, new arrivals filled every corner in Washington, and they planted wheat. But what grew well in Skagit Valley was different than what suited the drier climates of Walla Walla County. An incredible diversity of wheat flourished statewide. By the 1880s, transcontinental railway lines pushed through Washington, and mills like the one in Waitsburg could finally get their inexpensive, high-quality wheat to the bigger populations West of the Cascades. Still, local mills in the coastal regions continued to grind local grain, and many small farms across the state grew a variety of grains, some for flour, some for feed.

The local mill was pushed to the point of extinction by turn-of-the-century technological change that ushered in a commodity flour with a very long shelf life. One by one, the local mills folded and wheat production became increasingly centralized. By the time the Waitsburg mill closed, it was one of the few early rural mills still operating. 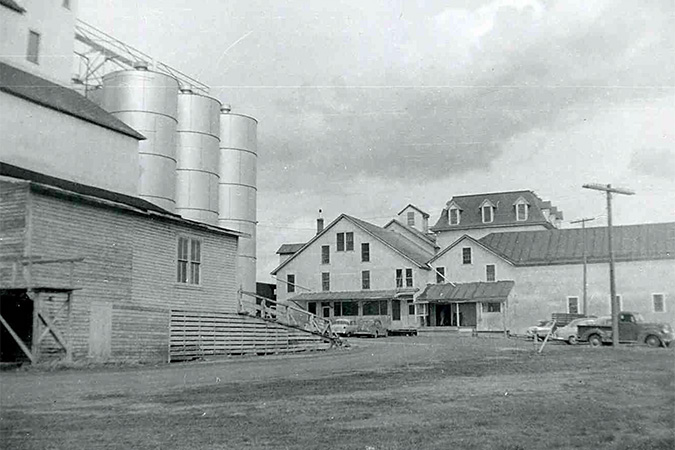 Wheat breeders refined wheats for high yields and ease of processing. By 2005, there were only two operating flour mills in Washington State, both producing primarily commercial-grade white flour. The effort to create uniform flours that didn’t spoil created vast quantities of flour, but also took much of the flavor and nutrition from our flour and the products made with it.

Fortunately, we are in the midst of a local wheat renaissance driven by the artisan bread movement and the invaluable research, wheat breeding, and educating done by Dr. Stephen Jones and his team at the Bread Lab located in Skagit Valley. We have mills specializing in grinding whole grain heritage wheats popping up, including Cairnspring Mills, in Skagit Valley, and the Fairhaven Organic Flour Mill, in Burlington. Both produce excellent fresh, stone-ground flour with superior flavor, nutrition and baking properties. At Macrina, we are increasingly turning to freshly-milled local flours. Both of our newest loaves, the Skagit Valley Sourdough and our Whole Grain Baguette sold at PCC Natural Markets, are made exclusively with locally grown and freshly-milled flours.

The Waitsburg Mill may not come back, nor many of the small, forgotten wheat towns. However, the diverse flours they once produced are returning for the same reason early settlers planted wheat everywhere: the taste that freshly milled whole grain flours provide. 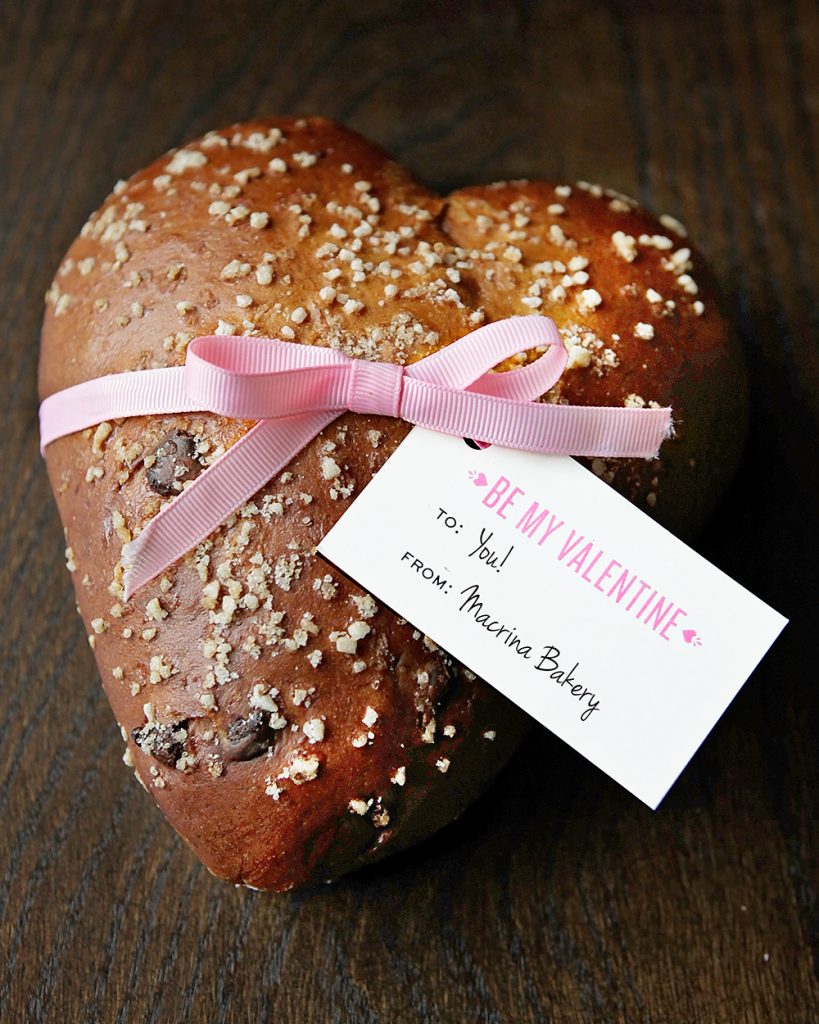 One of my favorite things about Valentine’s Day is that we get to make our Chocolate Cherry Almond Heart Bread. This bread is inspired by a Greek Christmas bread I began baking in Macrina’s early days. It has evolved into one of my favorite Valentine’s Day gifts. The aroma coming from our ovens while it is baking is irresistible— sweet and buttery mixed with the scent of cherries and bittersweet chocolate, and that hint of brandy is the kicker. We bake the golden-brown bread in the shape of a heart. I warm it up slightly before serving and have difficulty restraining myself from eating the whole loaf.

For those who don’t eat the entire thing in one sitting, or are looking for how best to use this bread, I have a few suggestions:

3. For a decadent dessert, toast one-inch slices and serve them with rich chocolate or vanilla ice cream and top with plumped dried cherries and drizzle of chocolate sauce

4. For a savory treat, cut half-inch slices and sauté in butter to golden brown and top with a slice of brie. The heat of the bread will warm the brie.

Our Cherry Almond Heart Bread is available at our cafés through Valentine’s Day. 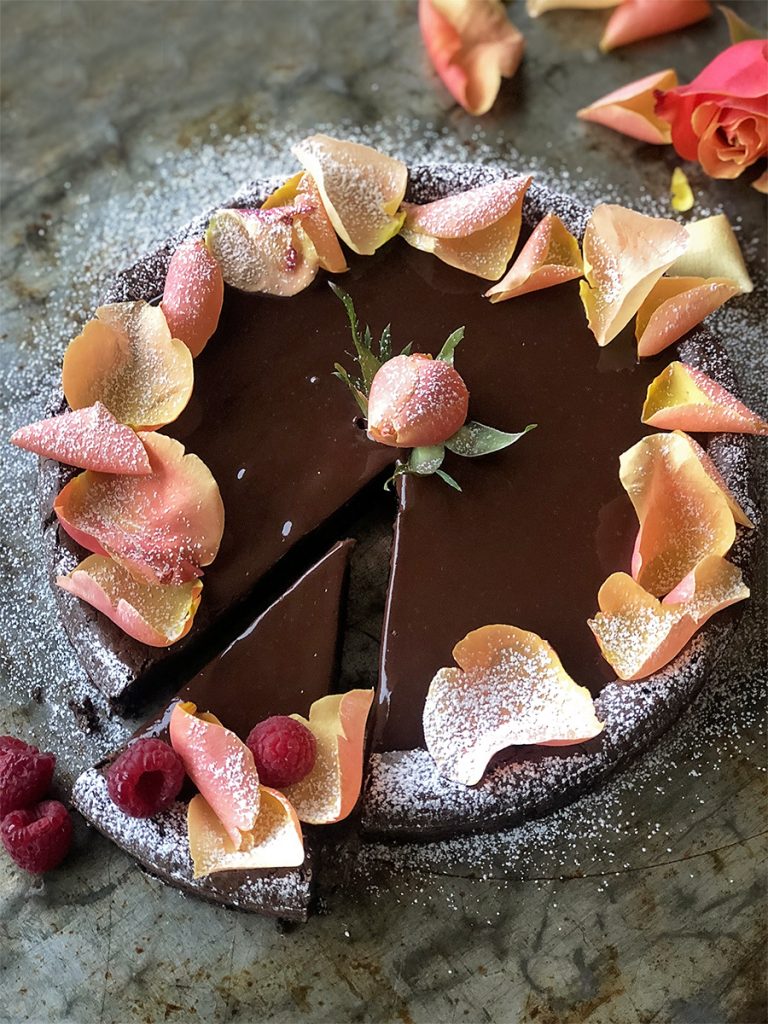 If you are looking for something decadent for Valentine’s Day (or any dinner party), this is it. This Wine and Roses Chocolate Cake is beautiful, intensely chocolaty, and wonderfully easy to make. Top it with lightly sweetened whipped cream and serve it with love.

This recipe is inspired by our Chocolate Rose Gianduja cake that Macrina makes for Valentine’s Day, which alternates layers of hazelnut and flourless espresso cake with a hint of rose water. This make-at-home version takes Auguste Escoffier’s mantra “Faites simple” (keep it simple) to heart. It will appeal to the tastes of the most refined epicurean, but anyone with basic baking skills can make it.

The rose water plays off the depth of flavor from the red wine in the chocolate glaze. It’s a lovely combination for a sweet Valentine’s Day treat! For a special presentation, garnish the cake with homemade sugared rose petals, or you can buy candied rose petals at some specialty kitchen stores, or online.

Preheat the oven to 325º. Brush a 10″ spring-form pan with melted butter. Then cut a parchment paper circle to cover the base and a 3″ band to line the sides.

Place the semisweet chocolate and the butter in a saucepan. Then make a bain-marie (or double-boiler) by setting it atop another saucepan filled with 2″ water. With the water simmering, continually stir the mixture. When completely melted, remove chocolate mixture and allow to cool.

Sift the sugar and cocoa powder into a stand-mixer bowl. Using the paddle attachment at medium speed, add eggs 2 at a time until they are fully incorporated. Scrape sides of bowl. With the mixer running at low speed, add the melted chocolate and rose water in a slow stream. Scrape sides of bowl again. Increase mixer to medium-high for 2 minutes. The mixture will become lighter in color and more aerated.

Transfer cake batter to the prepared spring-form pan. Level batter and bake for 25-30 minutes. Pull it out when the top is firm but just before it cracks. This cake can crack easily because eggs are the leavening agent.

Let cake cool for 30 minutes and prepare glaze in that time.

In a medium saucepan, scald the cream and turn off the heat. Add the chocolate chips and whisk until fully melted. Add the red wine and allow the glaze to cool to room temperature.

This is an intensely chocolaty cake, and it is best enjoyed with slightly sweetened whipped cream and fresh raspberries.