Macrina Bakery relies on many highly-skilled bakers. The brothers Andy and Dat Nguyen are two of our best.

We still make all our bread by the same methods we did in 1993 when Macrina Bakery first opened in Belltown—only now we make much more of it. Long, slow rises, with carefully maintained starters and forming every loaf by hand is a labor intensive way to make bread. But it’s the way great bakers around the world have been making the best loaves for centuries. Making bread this way is who we are.

As we’ve grown, we’ve had to find and train new bakers. Our head baker, Phuong Bui, is one great example. And it was through Phoung, or more precisely, his mother, that we found two other key members of our bread team. Phuong’s mother met Andy and Dat Nguyen in an ESL class at South Seattle Community College in 2003. She mentioned her son was hiring at Macrina. Andy was the first to be hired, Dat followed a month later. 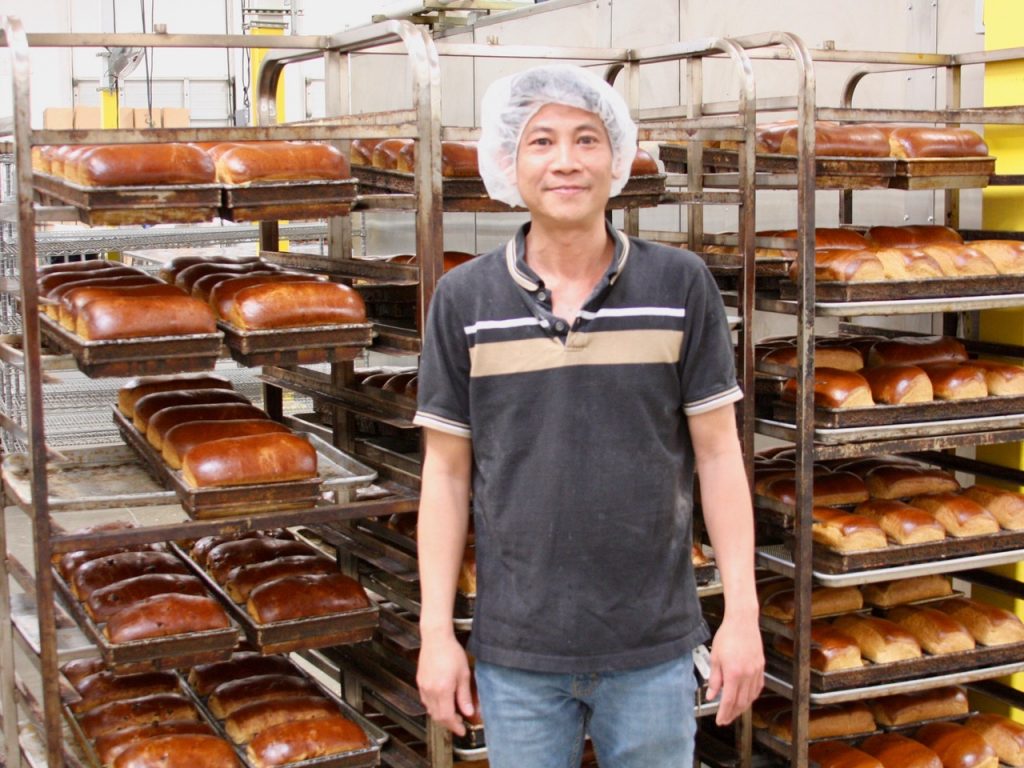 Phuong trained them both how to shape our various loaves and they joined the forming team. Both brothers were quick learners and showed great initiative. Within a few years, they’d both mastered each of the bread-making steps: mixing, kneading, proofing, shaping, and baking. “Learning each station was difficult,” Andy says. “But now after fifteen years, even the holidays aren’t stressful, just busy.”

Today, Dat is our Baking Assistant Manager. He oversees a crew of nearly 20, stepping in to help at every stage as needed. Sometimes it’s to speed production along, sometimes helping coach new employees, and making certain he can be proud of each loaf. “I’m thrilled Macrina has trusted me with more responsibility,” Dat says. “I take great pride in making great bread.”

Andy works the rack ovens, baking hundreds of loaves every day. He ensures that each comes out with that crisp, caramelized crust our customers have come to know. With so many loaves and many types of bread, it’s part craft, part art and takes a high degree of precision and focused attention. 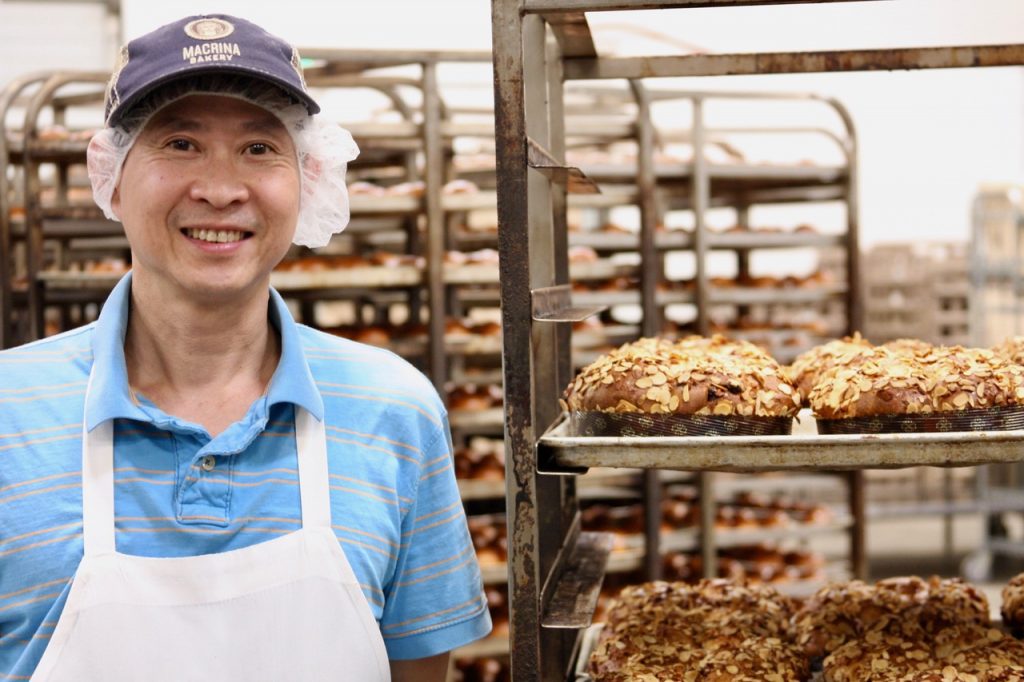 Andy lives in Burien with his wife who followed him from Vietnam. They have an eight-year-old daughter who attends White Center Heights Elementary, which has a Vietnamese dual language program. On weekends she likes to go shopping with her father, often asking him if they can go out for a very American lunch—at McDonald’s. Andy prefers Thai food but sometimes indulges his daughter. He relaxes by tending the gardens in his backyard.

Dat lives with his parents who emigrated to Seattle three years before Dat and Andy arrived. Dat has a six-year-old son who also attends White Center Heights elementary and is enrolled in the same dual language program as his cousin. Dat helps his aging parents with their needs. Recently, Dat has also had to contend with some of the skills his son has picked up at school, namely how to research new toys on YouTube.

Both families remain close, often gathering on weekends and holidays. During football season they get together to root for the Seahawks. Over the years, both brothers have returned to Saigon to visit friends and family in Vietnam. Andy always makes a side trip to Long Khánh, a small city in Southeastern Vietnam to visit his wife’s family.

At Macrina, we are incredibly proud of these two master bakers who have become part of our family. Without their talent, hard work, dedication, and ability to train and coach new employees we would not be where we are today. Thank you Dat and Andy for 15 great years!

Sign up for our recipe of the month newsletter to get delicious recipes delivered straight to your inbox! 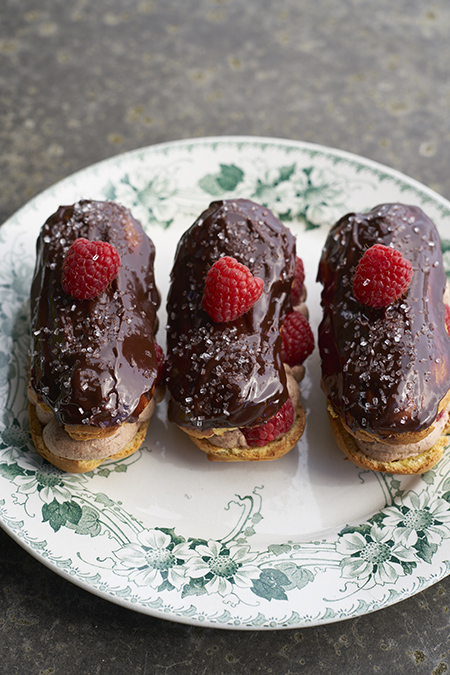 Mother’s Day always reminds me of how my mother’s passions influenced me. She was the first gourmand in our family. One of her favorite treats were éclairs from Rose’s Bakery in Portland. I have such indulgent memories of those crisp and airy cream puffs filled with pastry cream and dipped in chocolate glaze. This éclair embraces those memories with a nod to Macrina’s Chocolate Raspberry Cake. The airy golden-brown éclair is layered with rich mocha mousse and fresh raspberries. A glaze of bittersweet chocolate ganache gives balance to the creamy mousse and sends chocolate lovers like me to the moon.

Pâte à Choux
Line a rimmed baking sheet with parchment paper and preheat oven to 400°F. In a medium saucepan over medium heat, combine the milk, sugar and butter. When the sugar is dissolved and the butter is melted, add the flour. With a wooden spoon, mix well and cook for 1-2 minutes. Transfer the dough to the bowl of a stand mixer. Using the paddle attachment, mix on low speed for 1 minute to cool the mixture. Add the eggs one at a time, ensuring you’ve fully incorporated each before adding the next. Transfer the dough to a pastry bag fitted with a 1/2″ tip. On the prepared baking sheet, pipe eight 4″ long éclairs. Leave about 1″ of space between each éclair. You can smooth out any irregularities by dipping your finger in water and brushing the dough into shape.

Bake for 15 minutes, then reduce oven temperature to 350°F and bake for another 10 minutes. The éclairs should sound hollow when tapped at the base. Let cool 20-30 minutes.

Mocha Mousse
Heat a double boiler and add the chocolate chips, brewed espresso and butter. Stir until the chocolate melts and the mix is combined. Cool for 15 minutes.

Add the heavy cream to the bowl of a stand mixer. With the whisk attachment, whip the cream on medium speed. Gradually add the powdered sugar. Whip to medium stiff peaks.

Remove bowl from mixer. Fold the cooled chocolate mixture into the whipped cream until it’s well combined. Keep cool until you are ready to use it.

Ganache
Place the heavy cream in a small saucepan over medium heat. When the cream begins to bubble at the edges turn off the heat. Add the chocolate chips and whisk until they melt into the hot cream. Set aside.

Assembly
Cut the top 1/4″ from each éclair. Dip or brush chocolate ganache onto each top. Fill a pastry bag with the mousse (or use a spoon). Fill each éclair base with mousse (it should rise about 1/4″ above the edge). Cut 24 raspberries in half and place 6 halves on each éclair base. Cover with the ganache-glazed top and sprinkle with clear sparkling sugar. Garnish with any extra raspberries and the edible flowers.