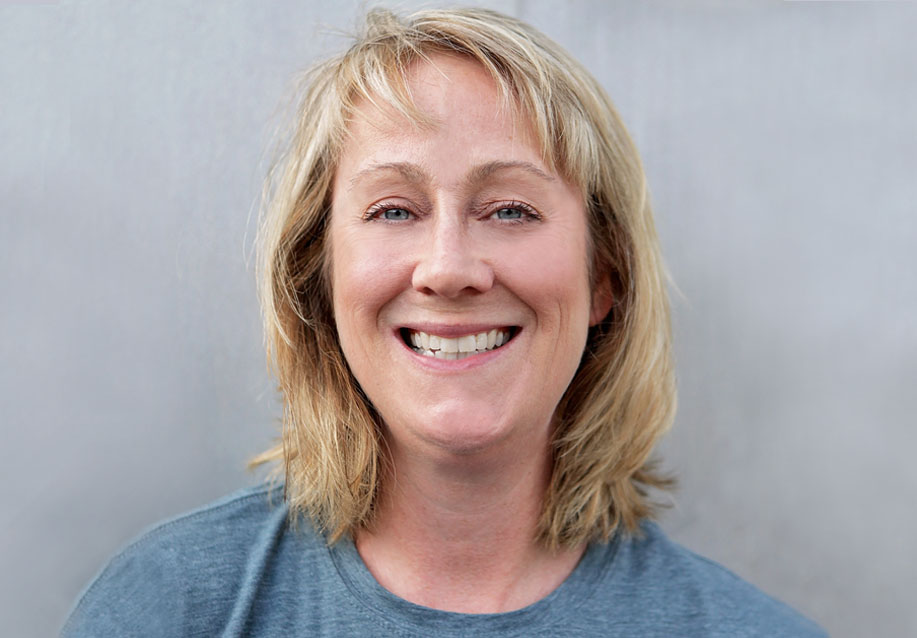 Marilyn is new to Macrina but not to Seattle’s food scene. Over the last 18 years, she’s acquired a wealth of experience while cooking at some of Seattle’s most acclaimed restaurants. After graduating from college with a BA in Art History and Archeology, Marilyn decided to follow her greatest passion: food. She enrolled at the Seattle Culinary Academy at Seattle Central Community College and began cooking at The Ruins. Over the years, she has worked at The Herbfarm, with Tom Douglas, at Ponti Seafood, and Crow, amongst others. Most recently she was the Kitchen Manager for Metropolitan Market.

At Macrina Bakery she manages the Savory Department. A typical day starts at 5 or 6 in the morning. She balances her time planning the daily production schedule, cooking with the crew, ordering supplies, and developing new specials. On the weekends she is busy supplying the cafes for their busy brunches, running over to provide support to especially busy cafes, or helping deal with crises such as the occasional equipment breakdown.

Marilyn grew up in Seattle’s Magnolia neighborhood, and two of her sisters still live in the Seattle area. In her free time she loves to take long walks with her two dogs, Chloe and Julia Child. She enjoys hiking in the Cascades and Olympics and can often be found cycling on her days off. In the summer, she loves to cook on her large Brinkmann charcoal barbecue in the backyard where she just reaches into her garden for fresh herbs.

Her favorite thing about Macrina is the people she works with and the company itself. She says it’s clear the company really cares about each employee and the quality of the breads and pastry and savory is so high and so consistent that the company is growing fast. While that keeps her busy, she’s happy for all the opportunities it provides for her and her crew. 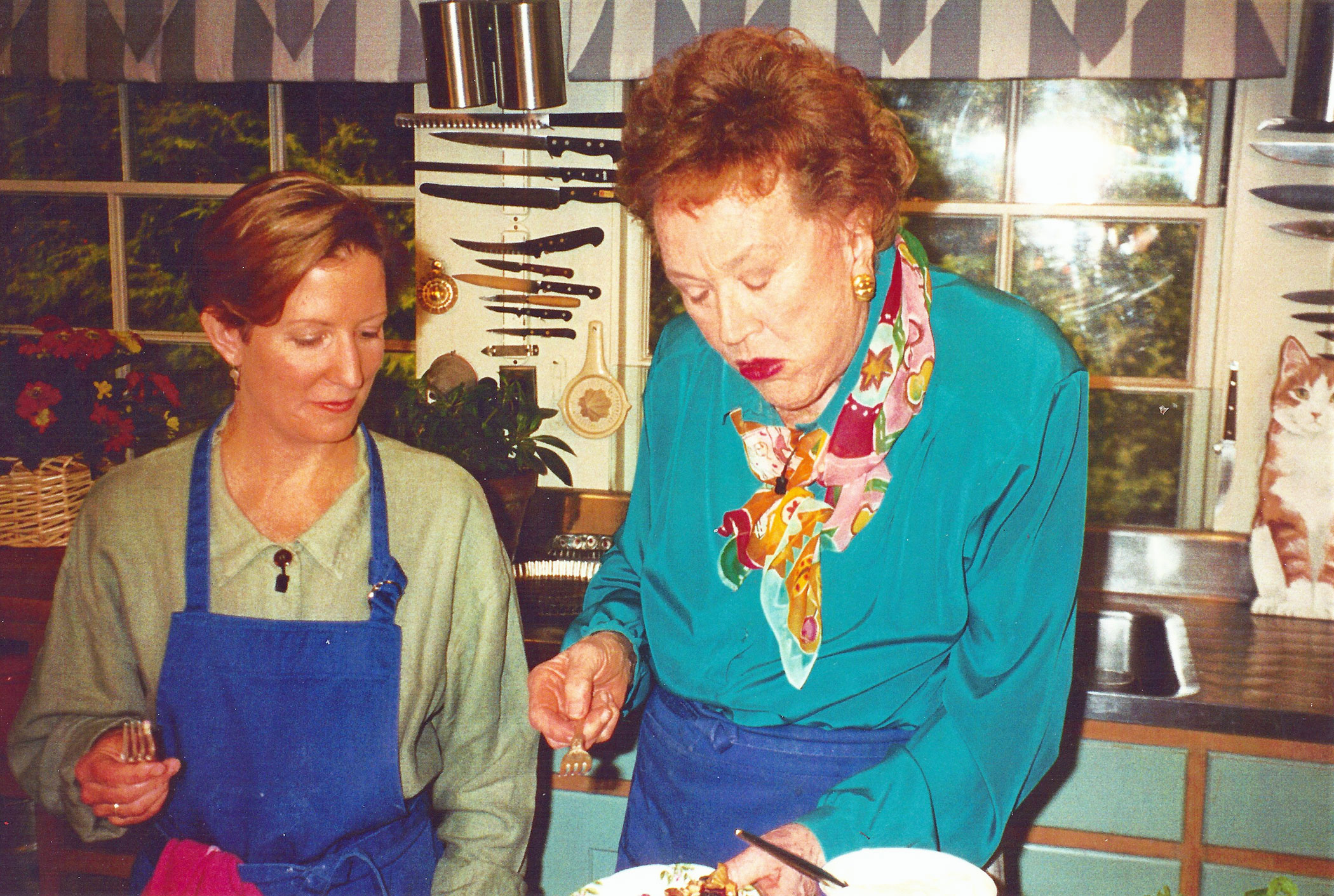 One of the bakers here at Macrina noticed that Julia Child’s birthday was coming up on August 15th and suggested I write about my experience filming Baking with Julia in 1996. It just so happens I’m currently in Boston visiting my dear friend Susan Regis, a super host as well as a James Beard Award-winning chef so the walk down memory lane is timely in many ways.

Susan accompanied me to Julia Child’s house for the filming of my episode that memorable summer day in 1996. Susan, who has presided over some of the most storied Boston kitchens, knew Julia Child through the Cambridge food network. I was glad my supportive friend was with me because I was going to cook in Julia Child’s kitchen. The Julia Child’s kitchen! It still gives me goose bumps to think about it. I’d done cooking classes before, but not on television and not standing next to Julia Child’s famous pegboard. It was a dream come true, and yet I was absolutely terrified. 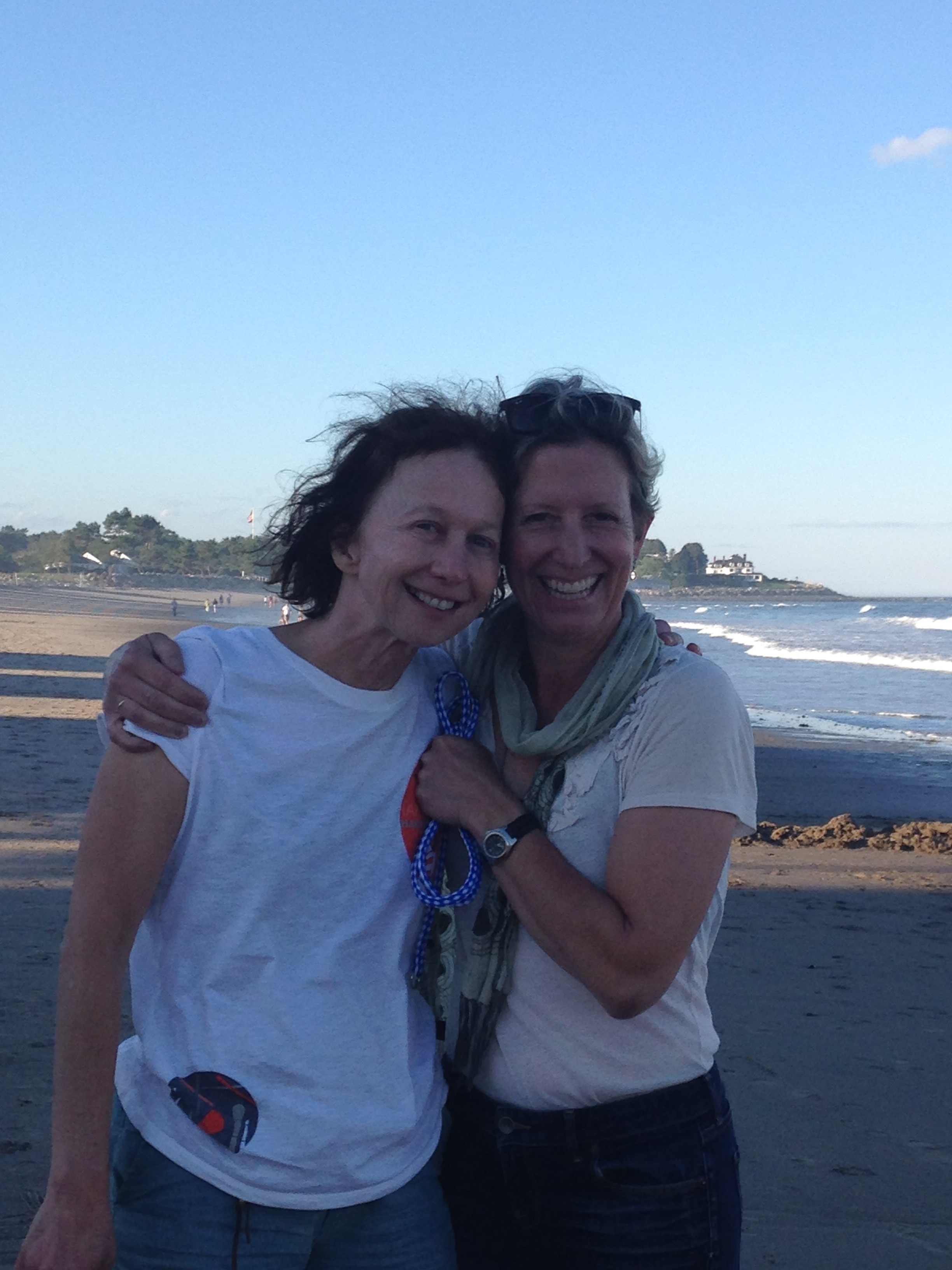 I’d met Julia Child briefly back in the 80’s when I cooked at Jasper’s, a great restaurant on the Boston waterfront in its day. I was very surprised and honored when I got a call and heard that Julia Child was interested in featuring me in an episode of Baking with Julia, the show that would go on to win an Emmy Award and a James Beard Award. Macrina had only been open for three years. She traveled to Seattle, visited the bakery, and loved it. I wanted to do bread, my true love, but they had already lined up several very prominent bakers to be on the show. Julia loved our pastries and convinced me to make tarts. 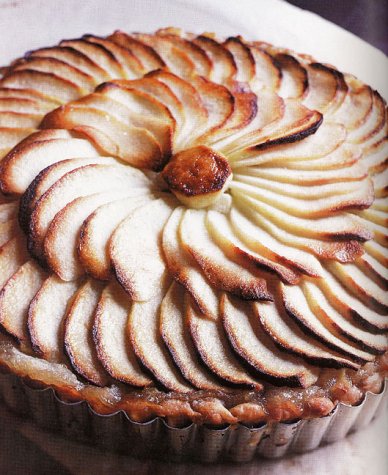 When the time came, I flew to Boston and with Susan in tow made my way to Julia Child’s imposing Cambridge clapboard house. The house was bustling with activity. There was a prep kitchen set up in the basement and her kitchen was transformed into a studio, full of lights, people, and cameras. There was a make-up artist, the cookbook writer Dorie Greenspan, who was writing the companion cookbook to the show, the producer Geoffrey Drummond, and several others bustling about.

It turned out that the night before we were to film there were some electrical problems and the air-conditioning had gone out. They’d had to bring in a generator and had hooked up an ad hoc cooling system. Silver accordion ducts poked through windows and out of hallways blowing cold air. Those cameras put out a lot of heat. Even with all their efforts it was still mid-eighties in that kitchen. It didn’t feel like a good omen.

I planned to make two crusts, our classic pie crust, and our crostata crust. With the pie crust I would make three tarts, a French Apple Tart, a Baked Yogurt Tart with Blackberries and Almonds, and a Blueberry Nectarine Tart. With the crostata crust I would make a Raspberry Fig Crostata. As filming started, we found the dough had to be kept in a cooler between takes. It was too hot and tart dough can be a prickly creature in warm weather. My nerves might have overwhelmed me in this less than ideal scenario if Julia Child wasn’t so graceful. She asked me instinctive questions, leading me along, smoothly adding details to help the home cook. I relaxed in a few minutes. 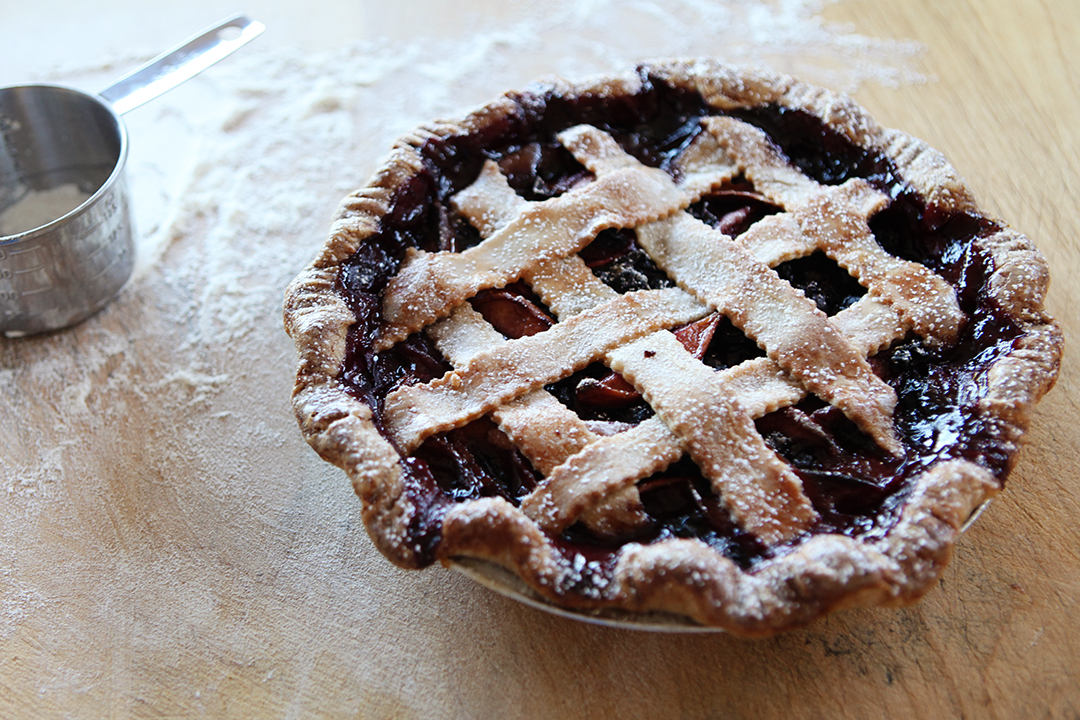 The rest of the day was a blast, even with the hot kitchen. The tarts came out perfectly! I even got to the crostata. Evidently I was fast, and we managed to film more than enough for one show. So I got a bonus half-show that just focused on the crostata. All of the humor and wit and personal connection that you see from Julia Child on the show came across even more between takes. It was unbelievably stimulating and thrilling to be there.

As I packed up my stuff, tired, hot, and exhilarated, little did I know that the best part of the day was yet to come. Susan invited Julia Child over to her house for a barbecue on the roof. Susan lived in a North End brownstone, four flights of stairs to the roof. Julia Child was 84 years old then, her husband Paul had passed away two years earlier. To my great surprise, Julia accepted the invitation. Geoffrey Drummond and Dorie Greenspan accompanied her. She scaled the four flights just fine, took a seat in an Adirondack chair and held court with a roof deck of people, most half her age. She talked of meals and wines, recalling nuances of flavor and special dishes fondly. What a memory she had. I think we grilled pizzas and I know there was lots of great food. I barely remember all that now. What I remember is Julia Child, sitting on the roof sharing her passions, not at all pretentious, incredibly approachable, humble, and full of grace.

That experience is one of the great memories of my life. The cookbook turned out beautifully. I was so pleased that in addition to my tarts and crostata they included my potato bread as well. It’s so much fun to be back at Susan’s recalling that day.

Happy Birthday, Julia Child. You will never be forgotten. 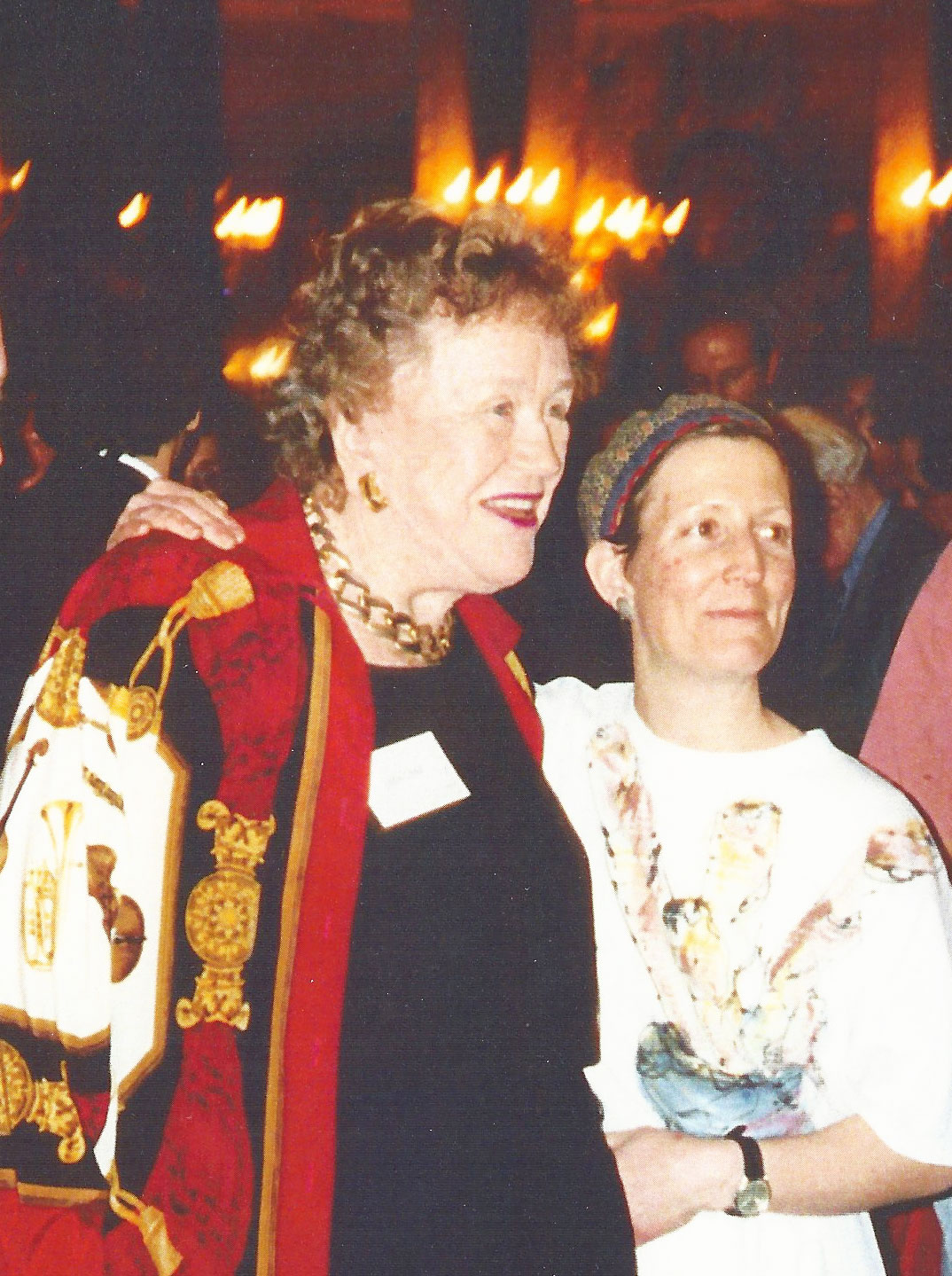 Early this June I visited Seattle Tilth’s farm incubator in Auburn with Marilyn Mercer, Elizabeth Hall, Mandela Turner, and Crystal Kitchin, Macrina’s brunch team. We were especially excited to visit the farm – Macrina is one of the lucky few establishments that buys freshly grown vegetables from Seattle Tilth for our weekly rotating brunch menus.

Seattle Tilth started in 1978 with its Urban Agriculture Center in Wallingford. The Tilth Association began as an alternative agriculture movement with the aim of supporting and promoting biologically sound and socially equitable agriculture in the Pacific Northwest. While the parent association disbanded in 1984, Seattle Tilth has continued to grow and thrive with a stated mission today to inspire and educate people to safeguard our natural resources while building an equitable and sustainable local food system. They teach people to grow food organically while taking care of the environment through a wide variety of classes, programs, and community events. There are classes for both kids and adults, many of them located in Seattle’s most diverse and densely populated urban neighborhoods. They’re an amazing resource for organic gardening education in the region. 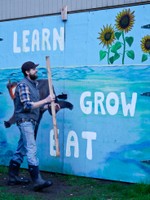 One of their newer programs is the farm incubator.  Matthew McDermott, the director of Seattle Tilth Farm Works, and Chris Iberle, the Food Hub Manager, led us on our tour of their forty-acre site in Auburn. They call it “The Red Barn Farm.”  While we walked through the fields of young starts, Matthew filled us in on the history of the land. Originally owned by former Seattle Supersonics Greg Ballard, who bought the land for a kid’s basketball camp, it was later donated to Seattle Parks and Recreation. They make it available to Seattle Tilth Farm Works as part of their Parks Urban Food Systems program.

The program provides farm business training and support to immigrants, refugees and people with limited resources in South King County. Each year they add ten new farmers to their training program that runs from February to June, reserving ten spots for returning farmers. Their aim is to help new farmers get into small farming, teaching them not just the elements of organic farming through hands-on experience, but also business planning, operations, and marketing. Matthew explains that the average age of an American small farmer is 60 years old. They hope to lower that through their program. 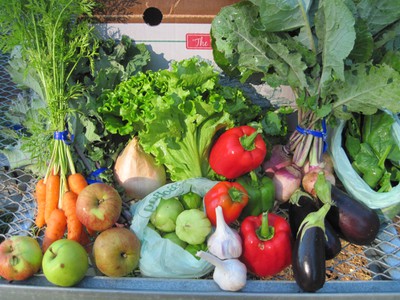 Each of the twenty farmers tends a quarter-acre parcel, growing vegetables for Seattle Tilth’s CSA subscription program that provides subscribers with a weekly box full of fresh, delicious produce from June through October. The farm also supplies the fresh produce for their Good Food Bag program, which helps supply healthy organic vegetables to qualifying limited-resource families. We saw peas, radishes, onions, garlic, corn, squash, and pole-beans. In addition to the open fields they have 13 100-foot hoop houses, most of them planted with tomatoes. Due to the low snow pack this year and the possibility of a drought they mandated a water irrigation system. To supplement their water supply, they have a large cistern that collects rainwater. At the end of our tour, we stopped by the cleaning station where the farmers wash and trim their veggies, weighing their daily harvest and logging it onto the weekly production board. 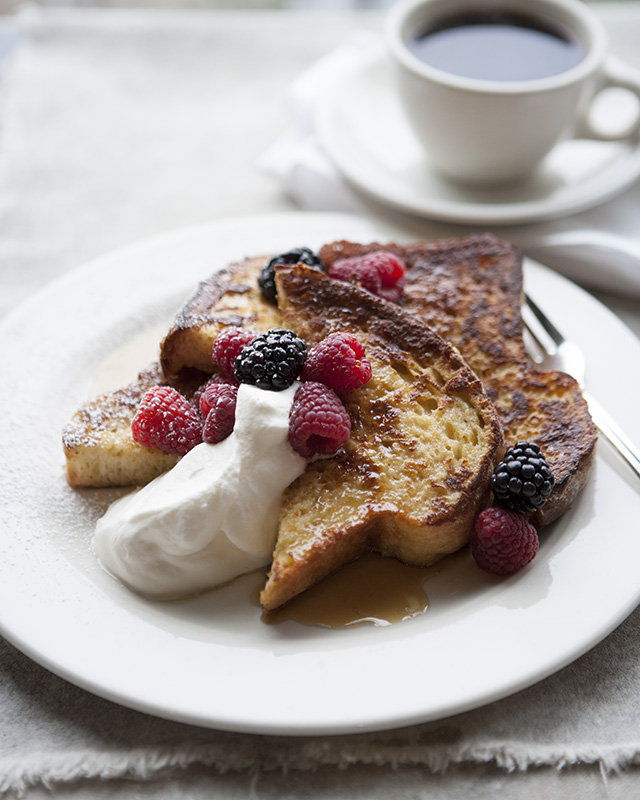 It feels good to be a part of a program that is training young farmers in the best practices for sustainable and environmentally sensitive farming. Moreover, their produce is simply delicious. Visit one of our Macrina cafe locations over the weekend and try something off of our rotating brunch menu to see for yourself.