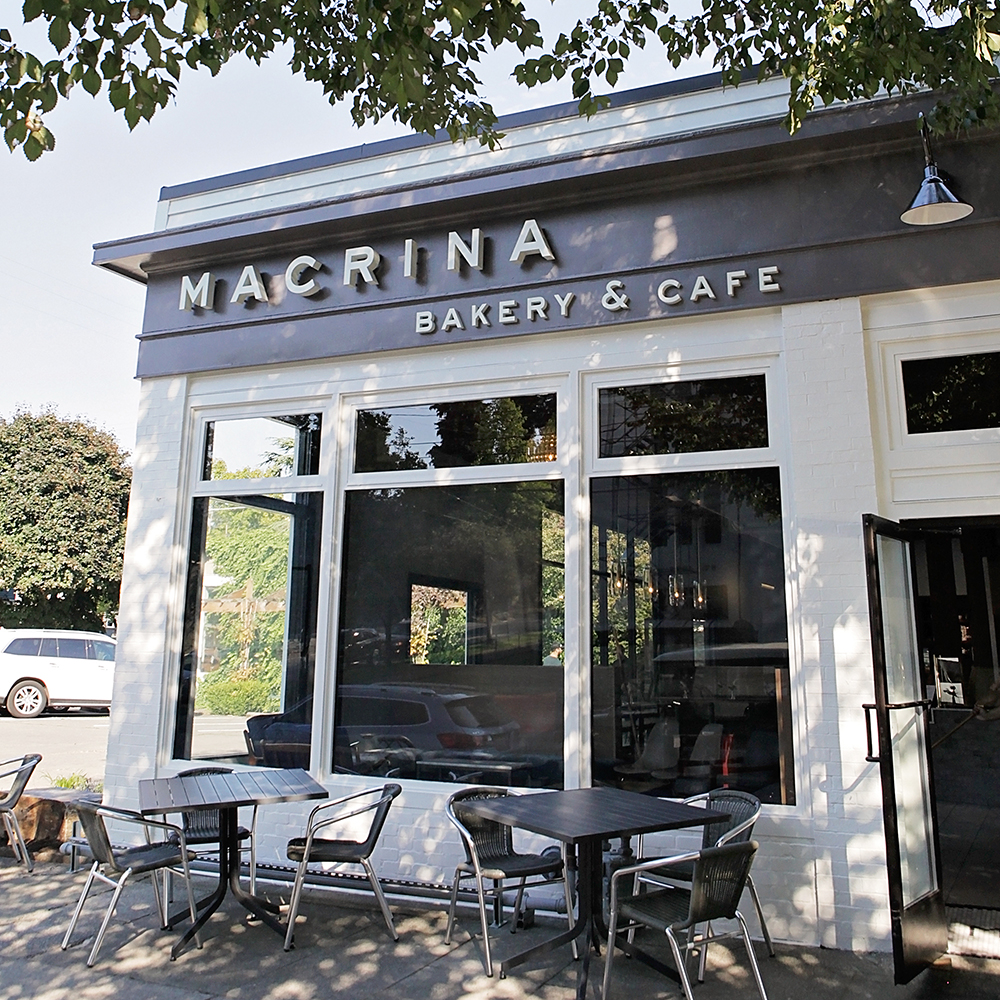 On the corner of 19th and Aloha on Capitol Hill, Macrina Bakery’s fifth and newest café opened at 7 a.m. on Thursday, September 6. Leslie Mackie, Macrina’s founder, worked the counter with new crew members and employees pulled from other locations.

It is a very bright and cheery space in the open, white-tiled kitchen. The sun filters through from the skylights above and mixes with the natural light coming from the wall of windows on the north side of the café.  Whether they knew one another or not, people filled the many communal tables, spending time together and taking in the new location. 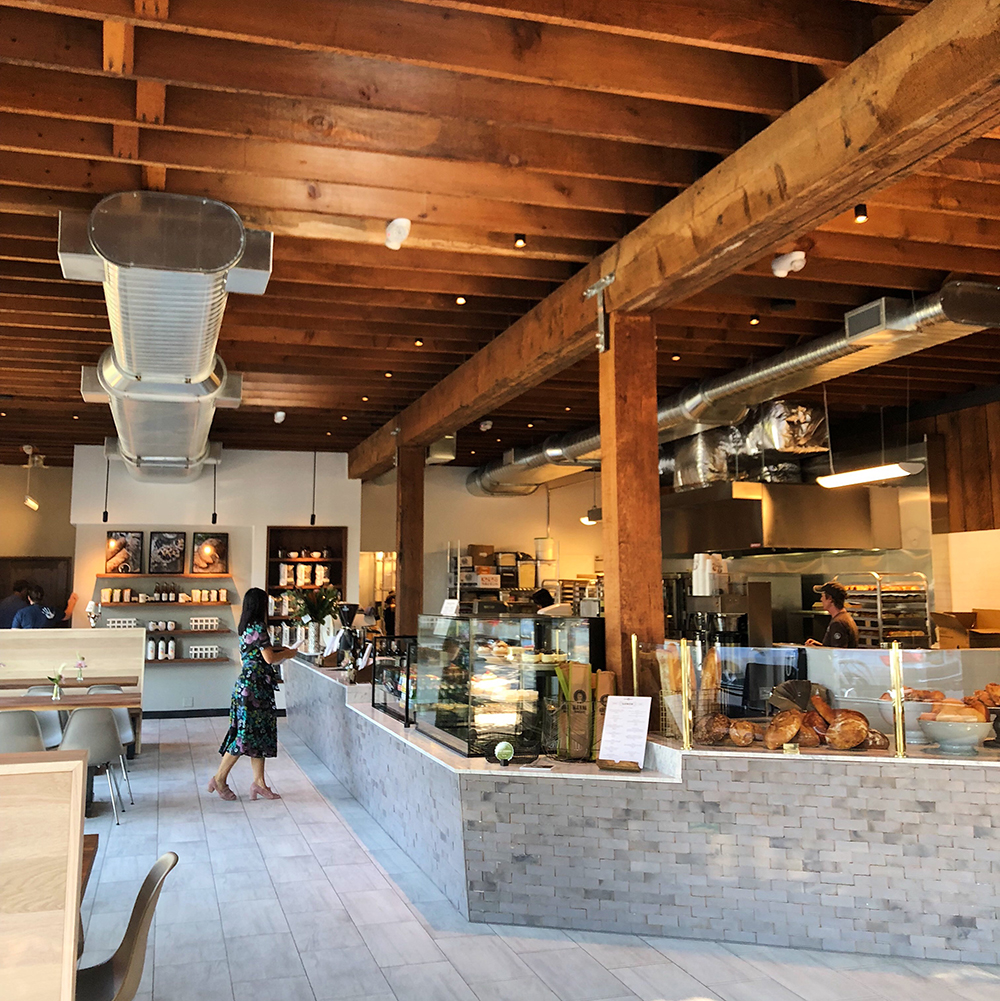 “We had a line out the door for two hours that morning,” said Scott France, Macrina’s president. “So many people from the neighborhood have come up to tell me how eagerly they’ve been waiting for us to open. It feels great to be welcomed so warmly.”

Many who had been watching the extensive remodel these past couple of months commented on their favorite design features: the wall of rough wood that was uncovered in the demolition phase, so stunning that we had to clean it up and keep it; the long, white marble display counters filled with loaves of bread, cakes, pastries, pies and savory items; the exposed wood joists that form the ceiling. One welcoming neighbor even brought in a large vase cascading with flowers from her garden.

Macrina received a welcomed surprise when Mayor Jenny Durkan proclaimed September 6, 2018, Macrina Bakery Day in honor of the twenty-fifth anniversary and our impact on the city. The full proclamation is worth reading as it honors so many of Macrina’s deeply held values: 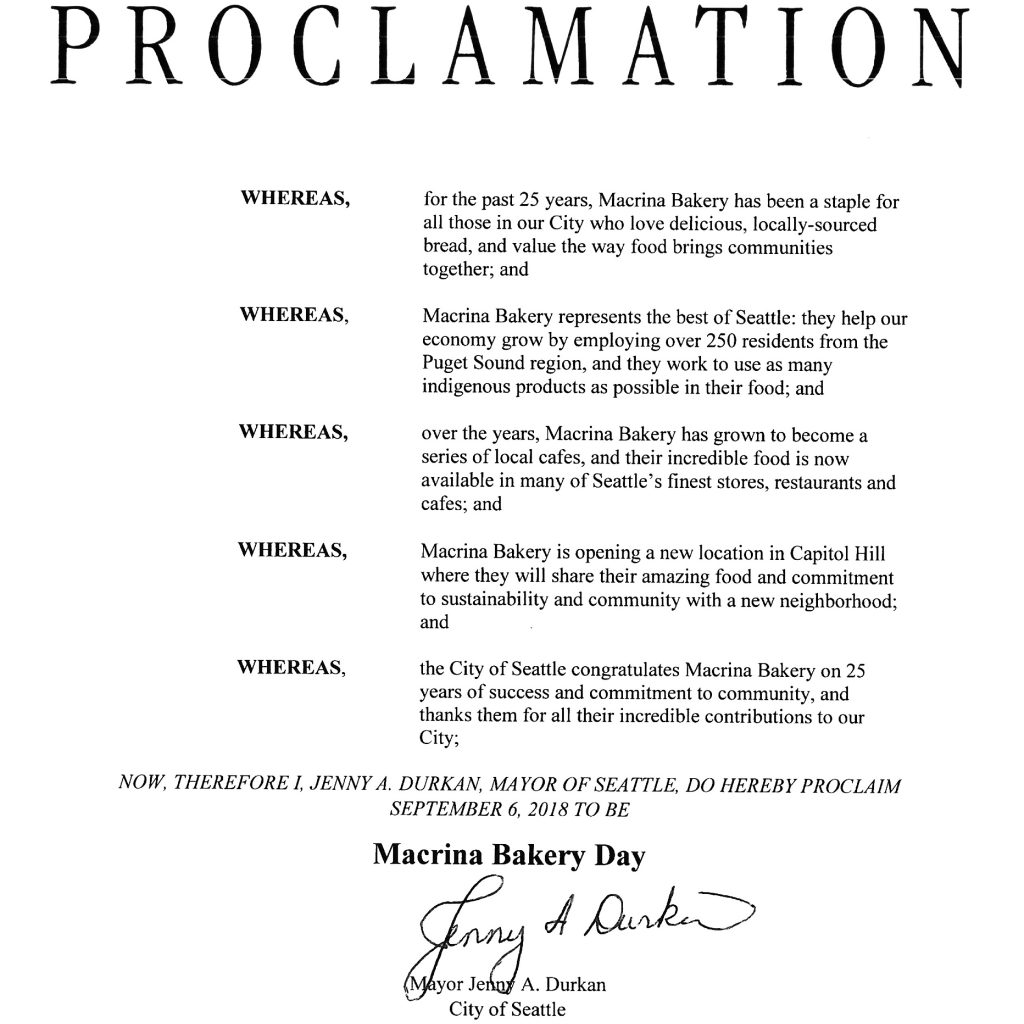 The new café is located in the same space once occupied by the Surrogate Hostess, a community bakery, and many customers mentioned it. Those who spoke of it remember it fondly as the bakery that once served as a gathering spot in the neighborhood. Macrina hopes to fill that role and to enrich the community with Leslie’s passion for artisanal baking.

“I couldn’t be happier with how the space turned out,” Leslie said. “And seeing so many smiling faces coming in for a pastry or lunch was fabulous. Opening our fifth café has been a wonderful capstone to our 25th-anniversary celebrations.” 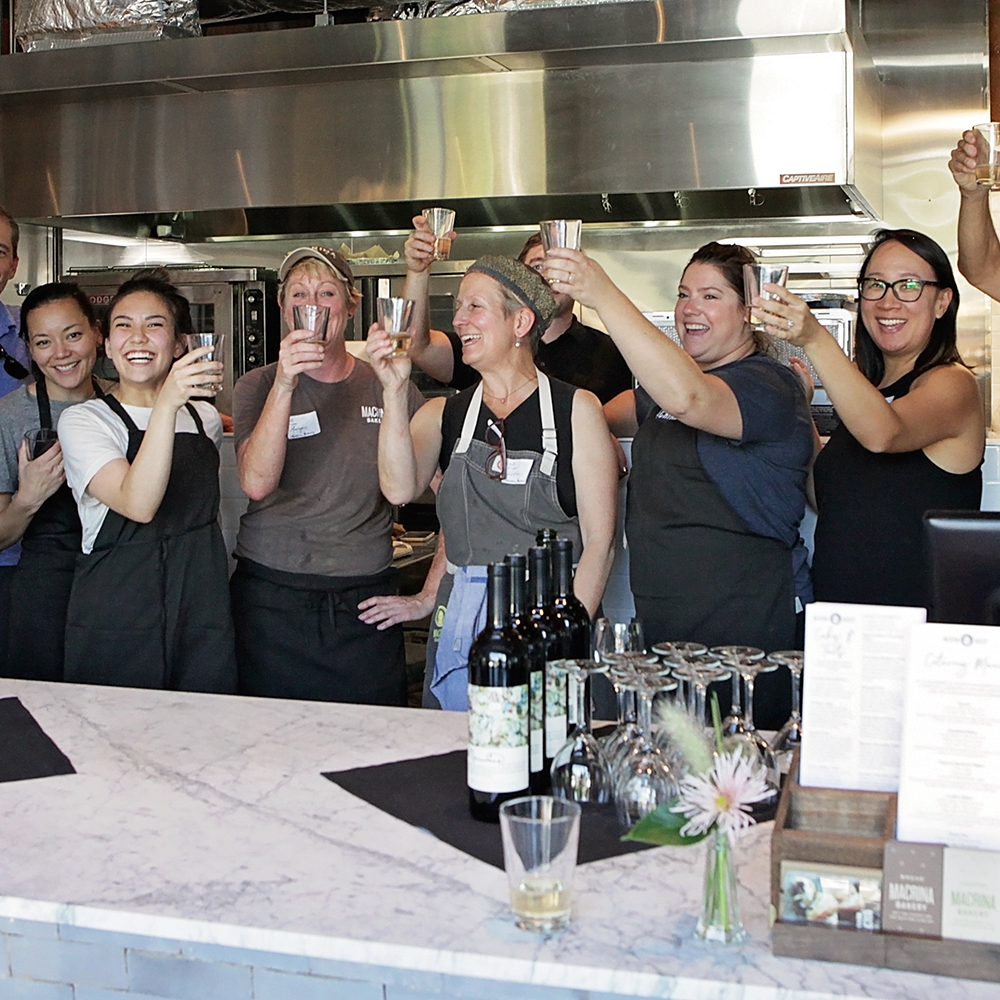 Since I opened Macrina in 1993, so many amazing people have helped make the bakery what it is today. In honor of our 25th anniversary, we are spotlighting a few key employees. Each fills an essential role at Macrina.

Ariel Singh’s experience and talent make her the perfect person to open our new café on Capitol Hill at 746 19th Ave E (on the corner of Aloha and 19th). She’s as wonderful a person as she is talented with customers and crew alike. Managing a café is a big job requiring superb customer service skills, extensive food knowledge, people management, logistics, administrative duties, and more. Ariel does it all with grace, charm and efficiency. 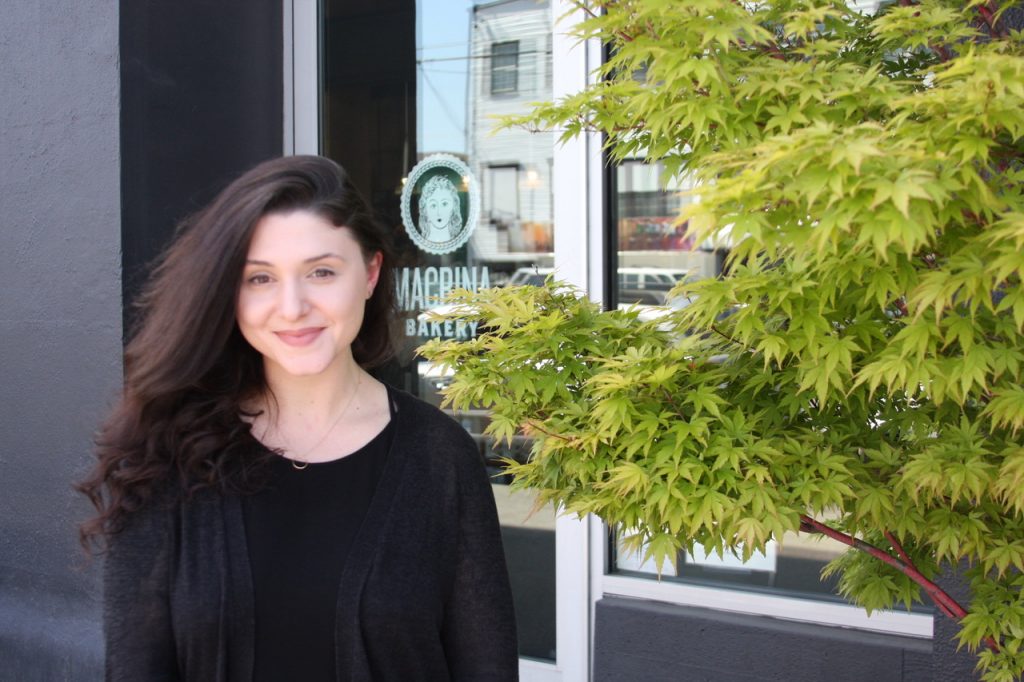 Ariel started working at Macrina’s Belltown Café in 2012, in the midst of a remodel. She spent much of her first week working side by side with Leslie Mackie, cleaning and scrubbing, before moving into other roles in the cafés.

“Macrina has grown, but Leslie is still present in everything we do,” Ariel said. “The breads, the pastries, and the values are the same. In some ways, I’d say Macrina has just continued to grow into itself.”

After Belltown, Ariel moved to the McGraw Café where she worked as Assistant Manager. She was promoted to General Manager of our Sodo Café in 2016. This was when Macrina’s wholesale production still worked in the space behind the café. About a year later, having outgrown that space, wholesale moved to our bakery in Kent, though you can still watch the pastry team working behind the windows at the Sodo café.

“Before wholesale moved, it was so fun to walk back there and see and experience everything being made from scratch, the potatoes boiling for the potato bread, all the dough being kneaded, and teams of bakers hand-forming and scoring every loaf. I miss it and encourage my crew to get out to Kent to see all the work that goes into our products.”

There has been one advantage since Wholesale moved out of Sodo. “Without the huge rack ovens running 24 hours a day, the café stays cooler.” Plus, speaking of cool, Gelatiamo, Seattle’s extraordinary gelato maker, now occupies part of the space. Owner Maria Coassin quickly hit it off with Ariel, so much so that she has been helping Ariel plan her upcoming honeymoon! 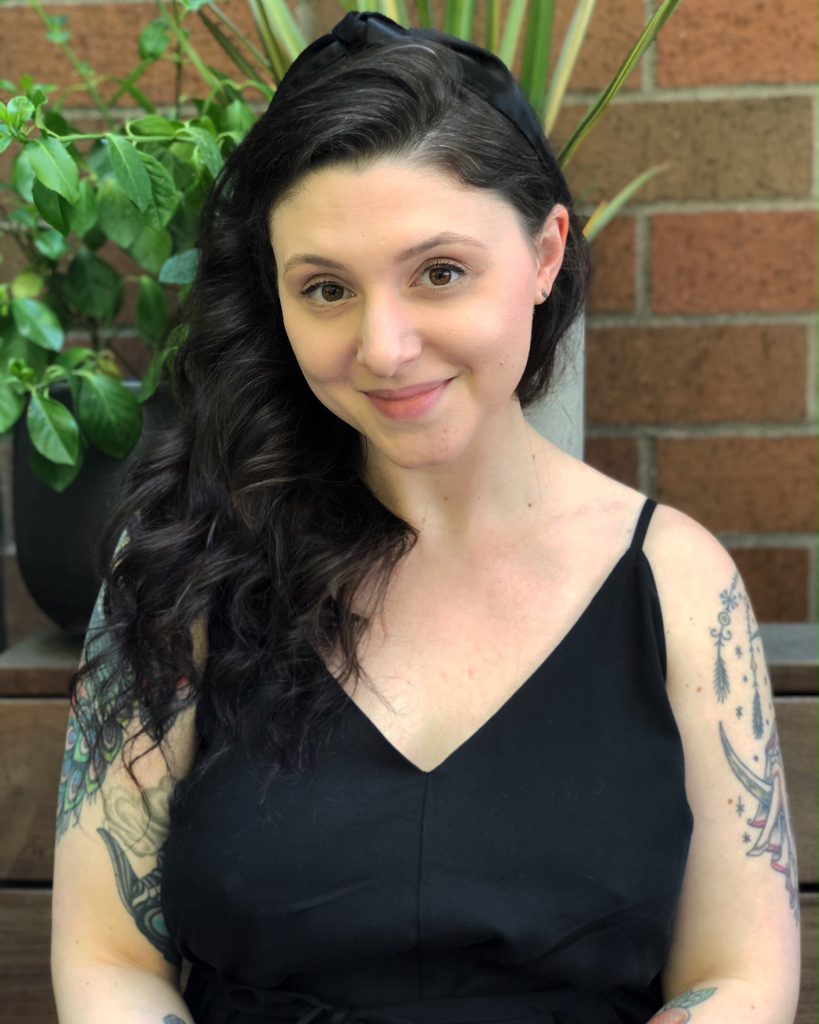 Ariel worked down in Sodo until this past August. When offered the opportunity to open Macrina’s newest café, there was no hesitation.  “I’m really looking forward to the challenge,” she says.

The location of the café was once home to the Surrogate Hostess. People are still talking about the Surrogate Hostess today, which is a testimony of the impact the bakery made on the tight-knit community. This would be a tough act for anyone to follow, but Ariel is a perfect fit. She is good with her crew, but she truly makes a point to create connections with her customers. “I’ve loved each of the cafés for different reasons,” Ariel says. “Each has a nostalgic feeling for me that I relate to different parts of my life. The best compliment I can get is when a customer from another café comes in and remembers me and say they miss me.” Now she’s ready to make new memories at Aloha and excited to get to know new customers in a new neighborhood.

“Ariel is incredibly hard working,” says Crystal Kitchin, the General Manager overseeing all of the cafés. “She strives for perfection. Working in food service, you can only control so much yourself. The rest comes from training your crew well. Ariel has risen to the occasion and become a great leader.”

But Ariel is just as appreciative of Crystal. “I’m lucky to work for a boss who I really like,” Ariel says. “Crystal is a guiding light. If I’m having a tough time dealing with something, she has an answer. Even to the most complicated interpersonal issues that come up with a big staff. I’ve also learned so much from working with Leslie. She’s the epitome of Macrina and what it embodies, in all the best ways.”

Ariel was married to her husband Narayan Singh about a year ago, almost to the day, on Labor Day 2017. The Corson Building, a gem tucked under the freeway in Seattle’s Georgetown neighborhood, provided the perfect setting for a food-crazy couple. If a flaw could be found, it was only that the day was a little warm for Ariel, about 85 degrees. “I was a little hot in my dress,” Ariel says, “but Narayan was happy. The wedding was perfect.”

They met in Seattle after both moving from warmer places, Ariel from L.A., Narayan from Las Vegas. Taylor Murphy, a mutual friend, introduced them. She used to work with Ariel. Because of their friendship, and Taylor being the point of intersection, Ariel and Narayan asked her to officiate their wedding. “At work, Taylor was frequently a little late, and I’m a stickler for punctuality. But she was definitely on time for the wedding,” Ariel laughs.

Narayan is a Clinical Psychology Doctoral Student at Seattle Pacific University. This keeps him very busy, which was part of the reason why they delayed their honeymoon until this summer.