Since I opened Macrina in 1993, so many amazing people have helped make the bakery what it is today. In honor of our 25th anniversary, we are spotlighting a few key employees. Each fills an essential role at Macrina.

When I interviewed Rebecca Gutierrez I had a hunch she would be one of our best. She had recently graduated from pastry school and was eager to learn more. She trained with one of our finest pastry chefs, Jane Cho, who is now our production manager. Rebecca has become a first-rate pastry chef. Not only does she head the pastry team at our Belltown Café, but she also does all our specialty cakes. We’re lucky to have her. 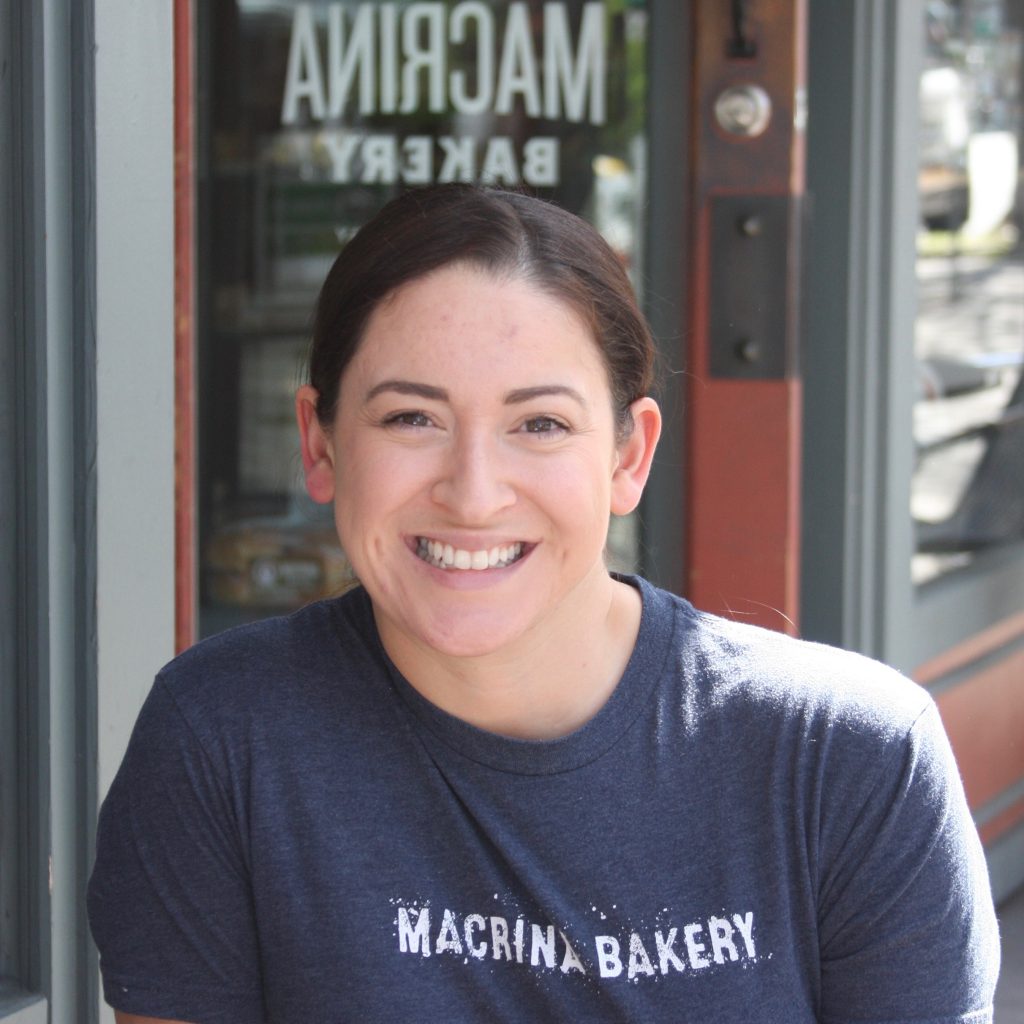 Nothing beats a pastry still warm from the oven, or the smell of fresh baked goods that permeates the café. Our cafés in Belltown, Queen Anne, and Sodo each have a team of pastry chefs preparing baked goods specifically for that café. Rebecca Gutierrez is not only one of our most talented pastry chefs, but she has also become a great teacher of the craft.

She grew up in Bellevue and went to pastry school at South Seattle College. After a short stint at a small wedding cake company, she discovered Macrina. Over the last seven years, she’s worked at all of our cafés at one time or another. If you’ve ordered a custom cake from us, chances are she made it. She also helps develop new products for our pastry case.

“When I interviewed for the job, I was impressed with how cool and down to earth and nice Leslie was,” Rebecca says. “If I didn’t already know, I never would have guessed she was the founder. Since the first day, I’ve liked Macrina a lot. The people are the main reason. I’ve made a lot of friends and management takes really good care of us.”

Erica Olsen, Macrina’s head pastry chef and Rebecca’s supervisor, says, “Rebecca is one of the hardest working people I know. She’s a phenomenal mentor. I enjoy working with her not just to witness her mad skills, but because time goes by so quickly when you’re working with her because she’s super funny.”

Because the pastries must be ready when the café opens, the morning pastry shift starts early. Rebecca often arrives at 4:30 a.m. She enjoys the relative calm in the kitchen before the café staff shows up. “It’s a pretty fun way to start the day,” she says. Working when others are sleeping means that sometimes you’re sleeping when they’re still playing. “I’ve had to say no to things my friends invited me to do, but they understand. They know my job comes first.”

But starting early means getting off early. And Rebecca lives near Discovery Park where she loves to go running with her dog while most others are still working. If the weather is beautiful, she likes to take an adventurous hike. 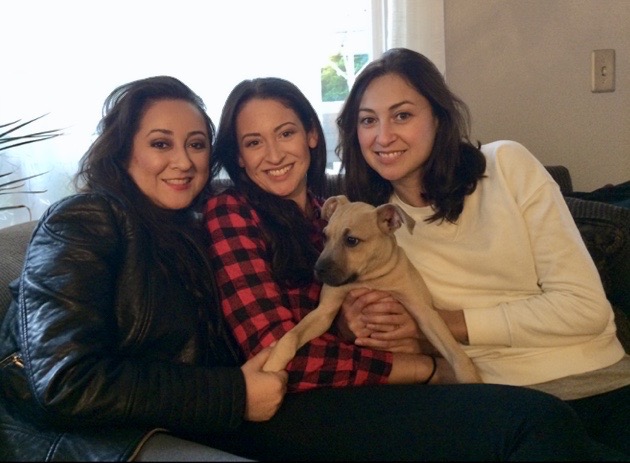 Rebecca with her sisters and her dog

Rebecca is also very close to her family and her Mexican heritage. Her parents were raised in Eastern Washington. “My parents are both one of eight, so I have a ton of family,” she says. “Family is super important to me.” Both sets of grandparents came to Washington State as migrant farmers. Her mom and dad, born in Arizona and Texas respectively, grew up in the nearby towns of Sunnyside and Prosser. They met at Yakima Valley Community College. About the time Rebecca was born, her family moved to Bellevue.

She sees her parents at least once a week and often her brother and sisters are around, too. “There’s always something going on,” Rebecca says. “My nephew will have a recital, or one of my nieces will have something.” The family also gathers for Seahawks games. “I’m not really into sports, but I go for the food and to see everyone. My mom is a great cook.”

And her family looks out for her. Burns are not uncommon in a kitchen with so many hot things, and Rebecca has gathered her share over the years. “One of my sisters does makeup,” Rebecca says. “She jokes that if I ever get married, she’s going to have to do my arms to cover up all the scars.”

Humor is an essential part of her family life, and likely where she picked up her great sense of humor. “They joke around a lot. They’ve started picking on my boyfriend when he joins me, good-naturedly of course. That’s how you know you’re in. They must like him because it didn’t take too long.”

Since opening in 1993, many amazing people have helped to make Macrina what it is today. In honor of our 25th anniversary, we are spotlighting a few key employees. Each represents an essential part of Macrina.

Bay Phan is an integral part of our wholesale pastry team. The team arrives in the mid-afternoon and works into the evening. Bay’s knowledge of our recipes and her precision and her skill with many types of dough is part of why our pastries are so consistently good. She leads by doing everything the right way and stays calm even when we’re in the midst of our crazy holiday rushes. 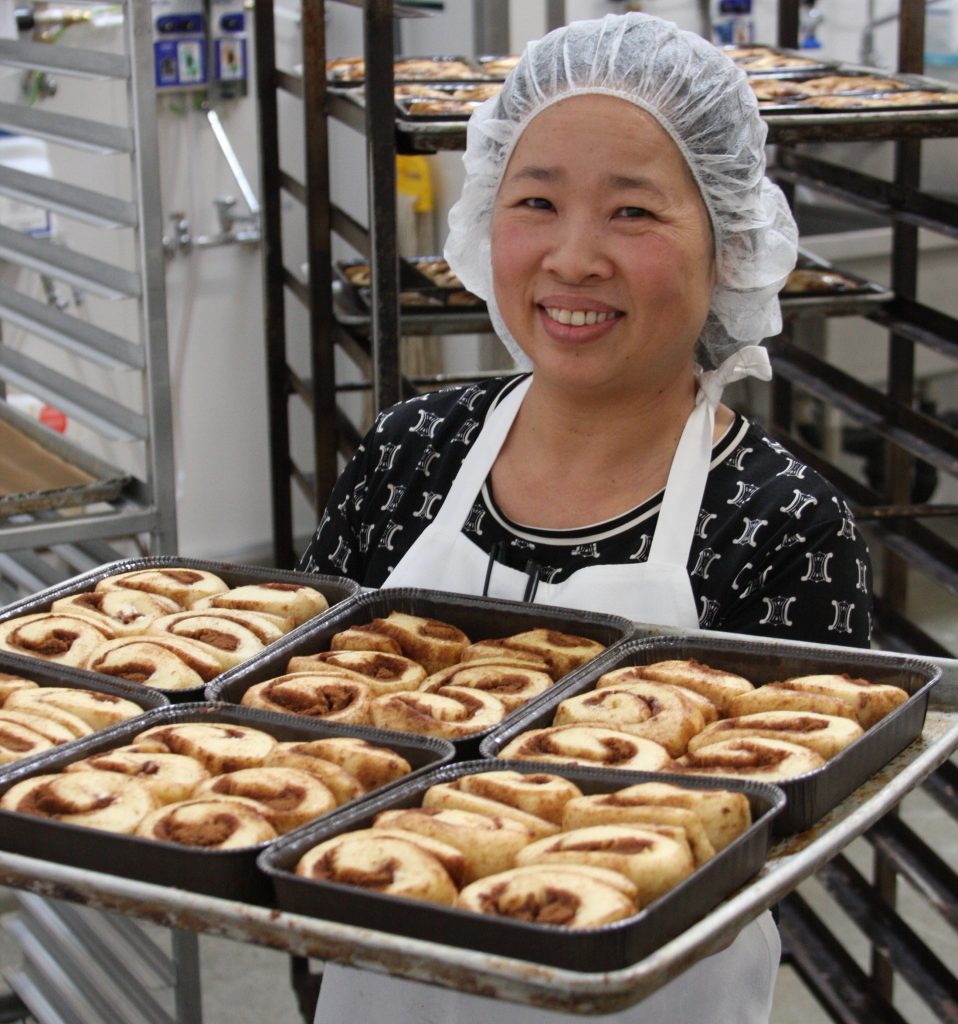 Bay Phan joined Macrina in 2009, shortly after arriving in Seattle from Vietnam. Her friend, Phuong Hoang Bui, our head baker, encouraged her to apply. She began in the wholesale pastry department and proved herself to be a quick learner and a hard worker. Nearly nine years later she’s become one of our leaders in the tight-knit group.

Speaking through a translator, Bay says, “There are about 20 of us, and most speak Vietnamese. We work together like a family. They know everything about me, me about them.”

“Bay is one hard worker,” says Tramy Le, the manager of the wholesale pastry team. “She’s very nice to everyone at Macrina and I am so happy to work with her.”

In 2016, Macrina’s wholesale pastry production moved from behind the Sodo café to a much larger facility in Kent. Bay says, “We were getting way too crowded there. Here we have the space we need to spread out. It’s much more comfortable.”

With growth comes new challenges, one of which is navigating the new food safety regulations. “Learning all the new rules is probably my biggest challenge, but it’s necessary,” Bay says. “But as I get used to them and all the new records I have to keep, it is getting easier. It’s a good thing!”

Training new employees who don’t speak English is another challenge for her. “Teaching employees who can’t read the recipe takes some time, but if they’re determined to learn and listen carefully, it’s rewarding. I always remember that I was like that when I started here. Once the new employee masters one pastry, we can move to the next. They become part of our family. I’m so grateful to Scott and Leslie for welcoming so many from the Vietnamese refugee community.”

Bay lives in the Sea-Tac neighborhood with her husband and two children. Her son attends the University of Washington, and her daughter is a registered nurse working at St. Francis in Federal Way. Beyond spending time with her family, two of Bay’s great pleasures are going for walks and runs in local parks and cooking. Pho is her favorite dish. She hasn’t taken to the many other ethnic foods available in the Seattle area. “I love Vietnamese food. The only non-Vietnamese restaurant I’ve found that I like is called Mongolian Hot Pot. The food tastes really good,” she says.

Next year her daughter is getting married. The wedding planning is already underway. “My daughter is looking for an American restaurant for the wedding,” Bay says laughing. “She doesn’t want an Asian restaurant.”

Bay has returned to visit her mother and four siblings in Vietnam twice since she moved to Seattle. She says, “It’s a long trip. Twenty hours.” She hasn’t explored Washington State much, but when her daughter was in nursing school in Yakima she visited a few times. She says, “I love the farms over there. I would like to explore more in that area.”