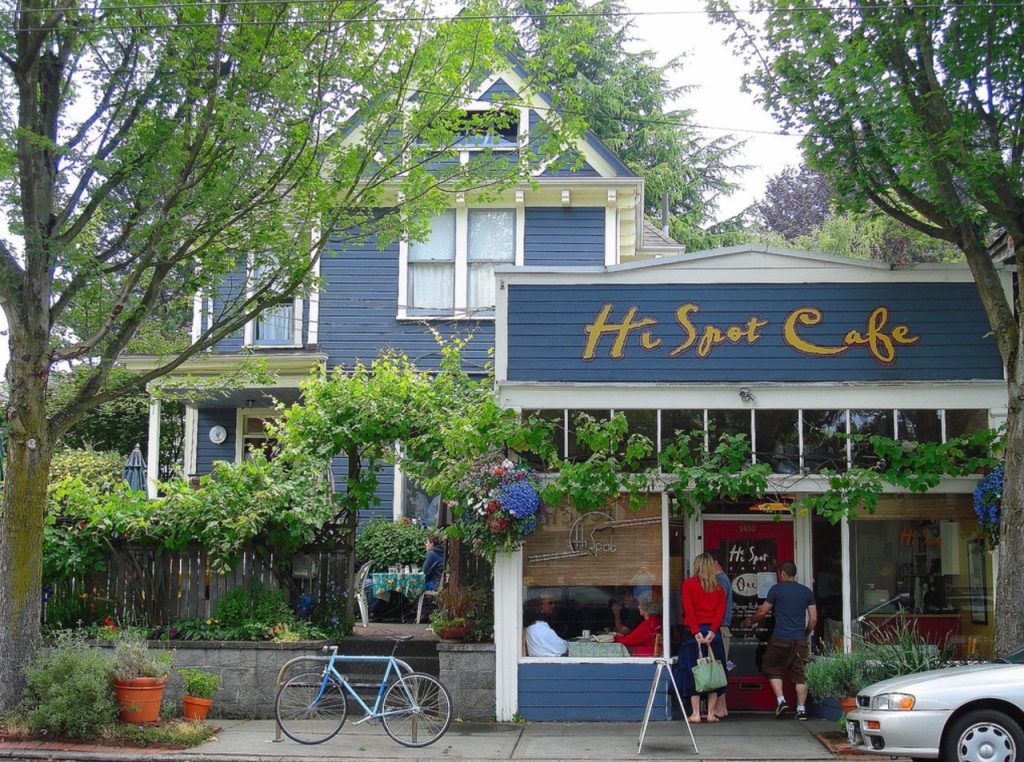 “It’s wonderful to have a place like the Hi Spot Café, a true neighborhood restaurant. Formula places are starting to take over, and speed is always of the essence. The whole ritual of leisurely going out —spending time in the community, enjoying yourself, talking with friends or family, having a delicious cup of coffee and terrific brunch— is such a thrill! Seattle is a big brunch town, and the Hi Spot Café is one of the places that have made it so.”

In a rapidly growing city, where hot new restaurants come and go like wild mushrooms, it is reassuring to find a place that has been making the same mushroom omelette since 1983. Hi Spot Café, located on 34th in Madrona, is so homey, it is actually built into a 1904 Victorian house. You enter through a storefront, which is set up with a coffee bar and pastries. Dining areas are up a short staircase connecting it to the house. The various rooms provide semi-private spaces, making the restaurant feel less crowded than it usually is.

The storefront, which was connected to the Victorian when it became the café in 1983, was originally built as a bakery. The baker and his family lived in the house. In fact, it would be accurate to say that generations of Seattleites have been getting breakfast at this location for 114 years. 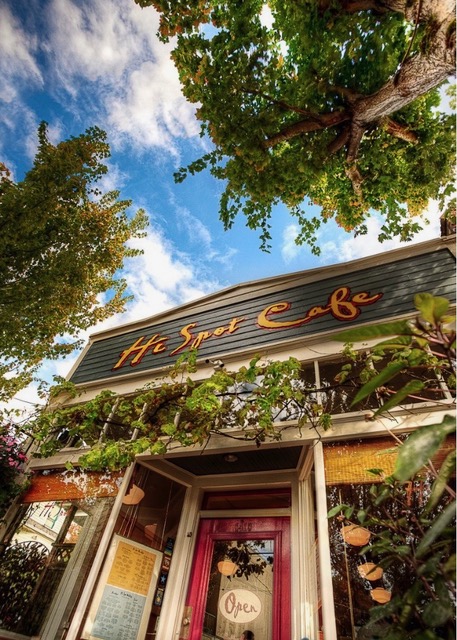 Mike Walker has owned (he bought it with a partner he’s since bought out) and operated the Hi Spot since 1994. He knows many regulars by name, even more by their favorite dish. “When I bought it it was a true to life hippy hangout,” Mike says. Great food, baked goods, tasty brunch, and a relaxed atmosphere made it a community favorite. Mike grew the business organically by focusing on doing more of what already worked. 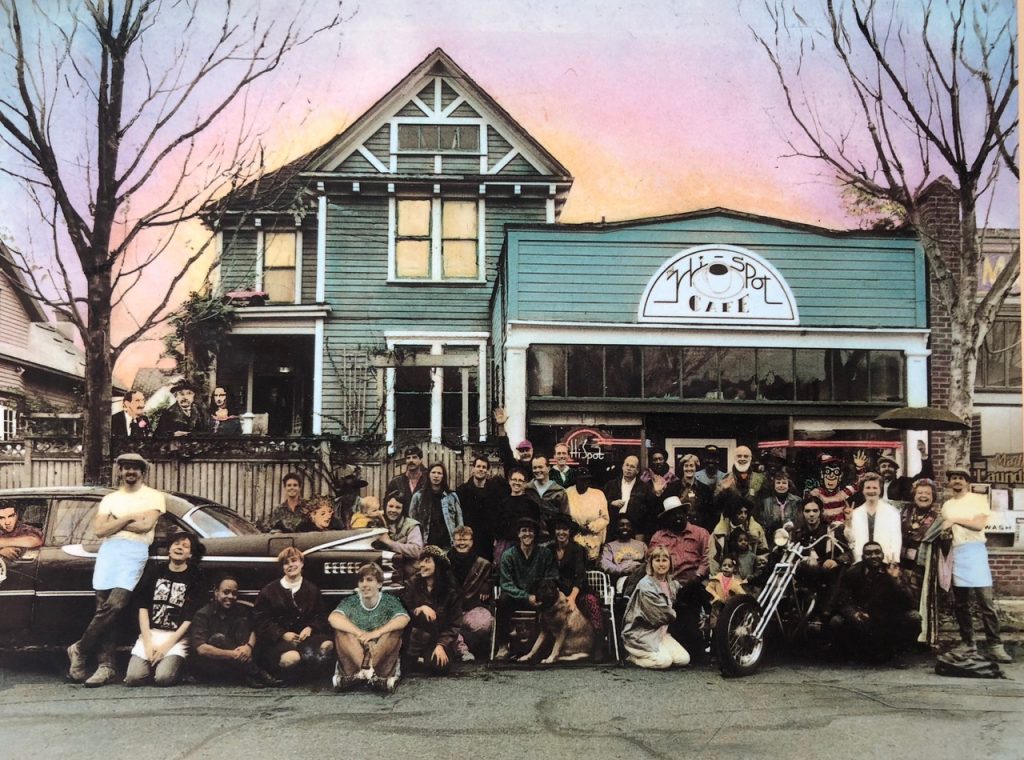 In the early nineties, a national CBS ad campaign called Breakfast for your Head had featured Hi Spot Café. “Tourists who’d seen the commercial used to make their way up here to take pictures of themselves at the Hi Spot.”

Hi Spot Café serves breakfast, brunch, and lunch, seven days a week. Mike tried dinner shortly after taking over, but it didn’t work. Back then, there were very few other restaurants on 34th, and the neighborhood could be dangerous at night. Madrona, like Seattle, has undergone enormous change and people now flock to 34th for dinner, but Hi Spot Café won’t change again. Old school has worked for them, and they still even have an AOL email address, which to them is a point of pride. As flashy new restaurants draw the headlines, they can sometimes vanish as fast as they appeared, it is refreshing to know a place can thrive by not changing.

“Over the years people have said, You should do this, you should do that,” Mike says. “I listen, but I took over a place that had a vision. I’ve worked to honor that, making small improvements over time. A steady vision of what your restaurant is and what it should be is essential. In a rapidly changing city, we are a point of stability. We know who we are and our customers value that.”

Cherished recipes and a steady vision aren’t all it takes. Finding great ingredients and suppliers is another key. “I’ve been using the Macrina Herb Roll and the Brioche Bun for 24 years. Macrina’s Brioche Buns make the best hamburger buns. I first got to know Macrina and Leslie when I was managing the Pink Door. Later, she lived nearby and frequently came in to eat.” 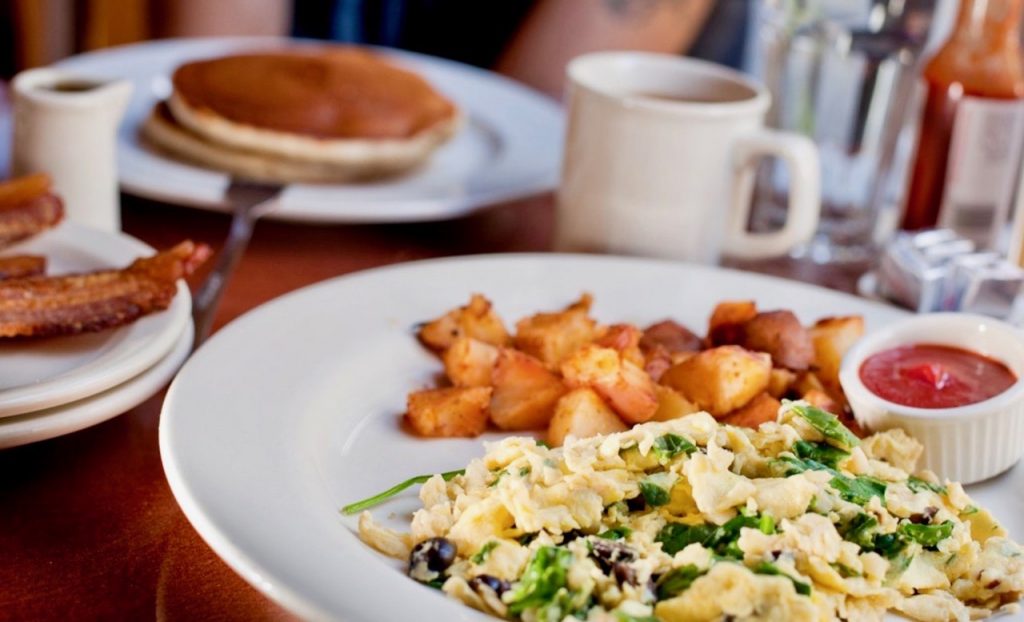 Hi Spot Café has 25 employees, many of whom have been there for years. The chef has been there for 23 years; some waitstaff are going on 15 years. “I’ve got very loyal people,” Mike says. “I treat them with as much respect as possible. I’ve worked in 28 restaurants and I fashion my management style on what not to do with employees.”

When warm weather arrives, the Hi Spot patio opens, doubling the seating. Even with the extra tables, don’t be surprised if there’s a waitlist. In addition to locals, people from all over the city flock to the restaurant. Occasionally you may even spot Mike McCready or Stone Gossard of Pearl Jam.

All of this happens with nothing more than word-of-mouth advertising, but the occasional blast of national attention doesn’t hurt. Four years ago, a recipe from Hi Spot Café was featured in an issue of Rachel Ray Every Day. “I don’t know how they found us,” Mike says, “but I’m glad they did!” The recipe was showcased alongside other breakfast recipes from across the United State, and the “El Pacifico Omelet” was chosen to represent Washington. 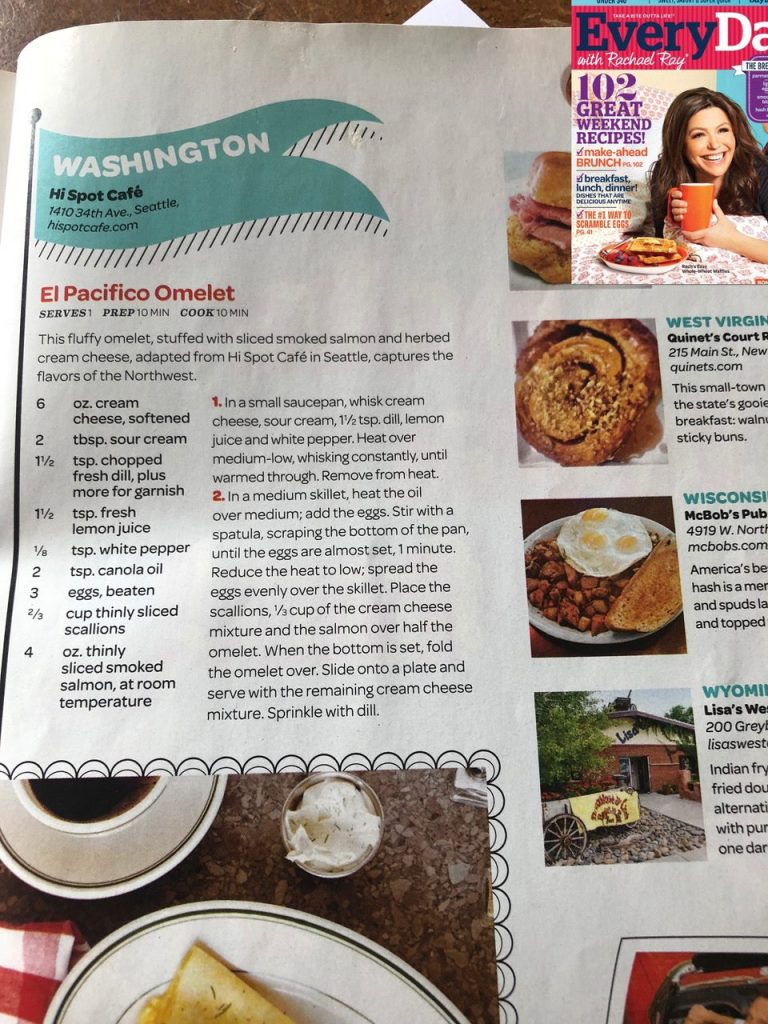 “We just keep doing what we do, making breakfast and lunch, eggs and Reubens,” Mike says. “I don’t really change the menu. I carefully add to it. It’s hard these days to find a place that makes a really good BLT, a great tuna melt. We make All-American food, simple with high-quality ingredients, and we consistently prepare it well. It’s an honest plate for $13.95.”