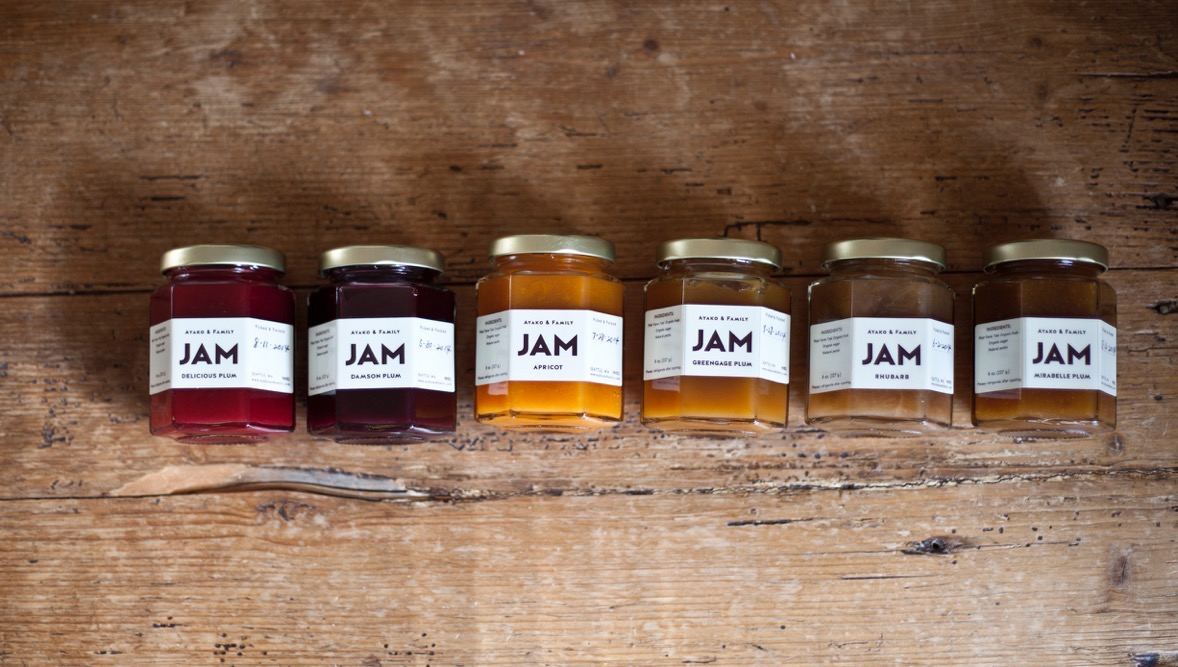 During lunch at Sitka & Spruce some years ago, a gentle-spirited dog walked in. Taking a stroll around the restaurant, just checking things out, he seemed to be saying hello to everyone and then waltzed out the door. I asked our server whose dog it was and she responded, “Ayako. She works at Marigold & Mint next door and makes the best jam in the world. You should try some.”  I went straight over after lunch and got a bottle.  Apricot jam.  Golden in color, perfect consistency and not too sweet.  I had to agree.

A jar of Ayako Gordon’s mouthwatering jam has that special homemade quality because it is essentially that. It’s a simple thing, an age-old tradition, taking the abundant fruit at harvest and preserving it as jam. But so few take the time today, or do it with the skill that Ayako does. Done right, the result is transcendent, the flavor taking us back to memories of grandmother’s jam or that perfect juicy plum you had in Italy. If you don’t already have a reverence for plums, this jam will change that.

These days, Ayako uses a commercial kitchen and no longer has the time to create beautiful flower arrangements at Marigold & Mint. She is the sole jam maker, processes all the fruit by hand, and jars it herself. All her fruit—Damson plums, apricots, rhubarb, Coral Pink plums, Water Balloon plums, Mirabelle plums, quince, and more—comes from Mair Farm-Taki in the Yakima River Valley. Ayako considers her relationship to Mair Farm-Taki a collaboration, where her aim is to highlight the quality and the uniqueness of the organic fruit grown there and to honor both of their Japanese heritage. 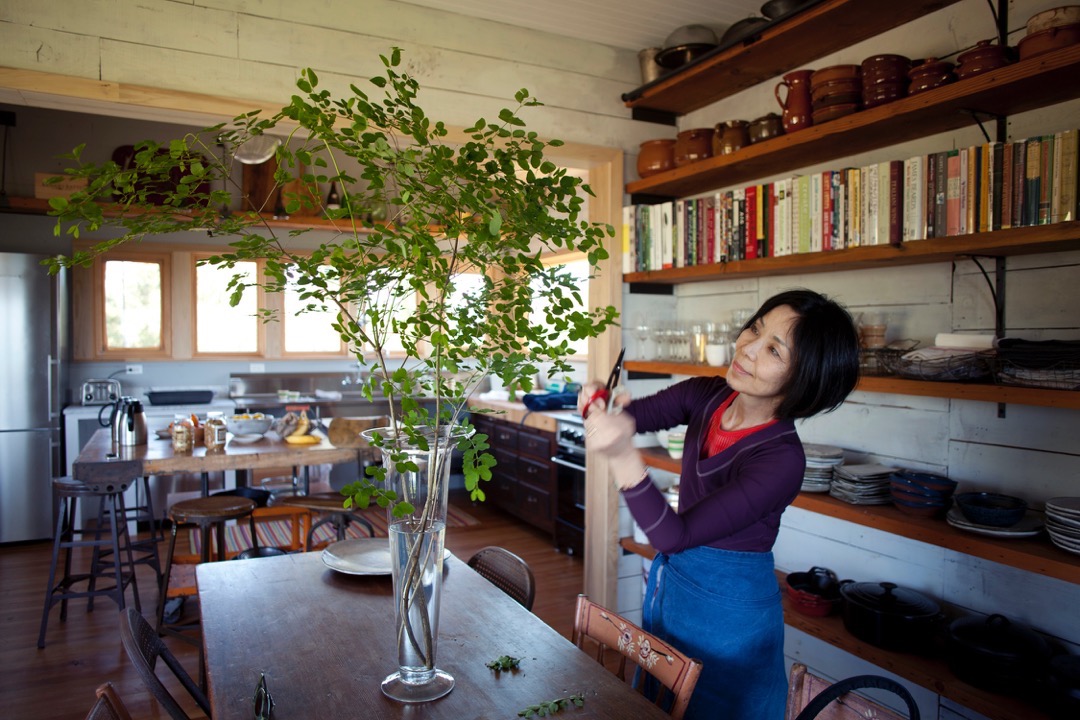 For such a small, artisan producer news of her remarkable jam has spread from coast to coast through national press, including the New York Times. Web orders from across the country have filtered in and a few small business owners enchanted with the jam and Washington small-farm agriculture now retail the colorful hexagonal jars of jam.

The whole serendipitous endeavor began in 2010 when Ayako began helping at the Mair Farm-Taki stand at the University District Farmer’s Market. One day the owner, Katsumi Taki, suggested Ayako make jam with all the fruit that didn’t sell at the market. She played around with recipes until she found one for each fruit that brought forth its essential flavor. She began selling the jam at the Mair Farm-Taki stand, Marigold and Mint in Melrose Market, and through farm CSA’s. As word of mouth spread a few local retailers began to carry it.

While Ayako still makes all the jam by hand, her children have jumped in to help her with the business, handling web design, sales, and other administrative tasks. Damson Plum and Apricot are her two signature flavors and are usually in stock. Other offerings rotate through the year, with over a dozen different plum varieties available mid to late summer as the harvest comes in. Rhubarb is one of the earliest harvest flavors to come in. A look through the website shows how many flavors are sold out. Not being able to find your favorite flavor only makes you want it more. And really, it couldn’t be any other way. Such is the cost of local, seasonal produce, hand-selected, and carefully prepared in small batches. It’s what makes it so memorable. 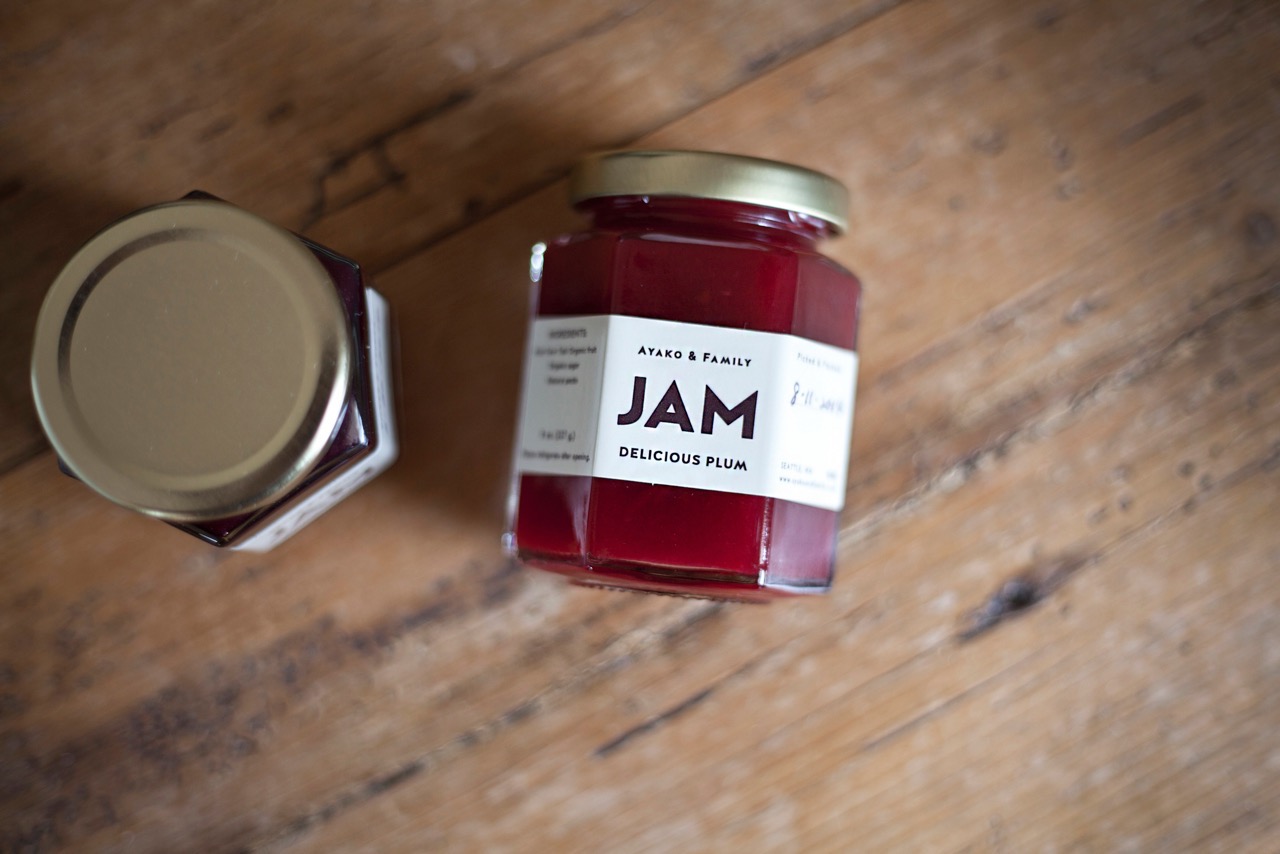 I’m delighted to carry Ayako and Family Jam at Macrina. It is the kind of local, artisanal
product that I love. Grab a jar next time you’re in one of the cafes and try some on a toasted slice of your favorite loaf. You’ll see what I’m talking about. 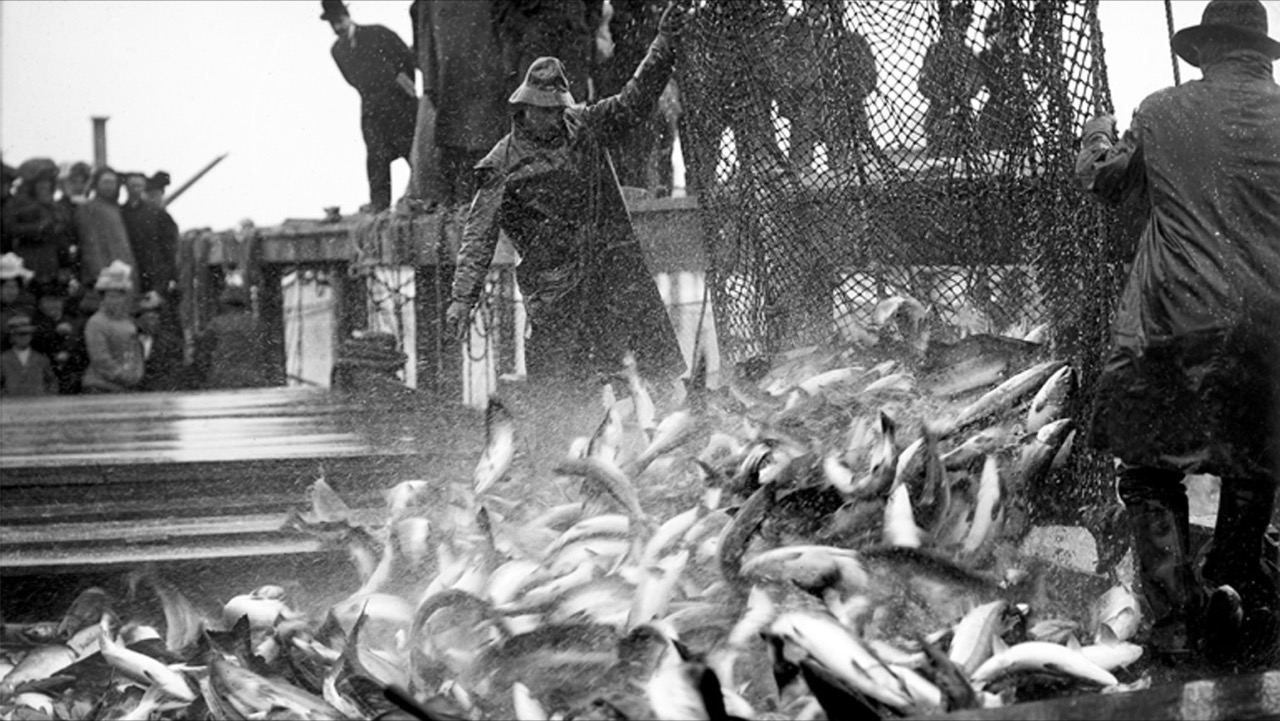 There may be no better way to know a city than by the way its people eat. Seattle’s Museum of History & Industry (MOHAI) currently has a beautiful new exhibit, Edible City: A Delicious Journey, which explores Seattle’s culinary history over the last two centuries. You journey across shorelines that provided abundant seafood to Native Americans in this area and trace the influences of Pacific Rim nations on signature dishes in four-star restaurants. If you haven’t already seen it, put it on your calendar. You’ll appreciate this place we call home all the more.

The exhibit, which runs through September 10, 2017, was curated by two-time James Beard Award-winning food writer Rebekah Denn. An exhaustive researcher, she writes beautifully. Enthralled by the exhibit, we recently asked her some questions to learn more. 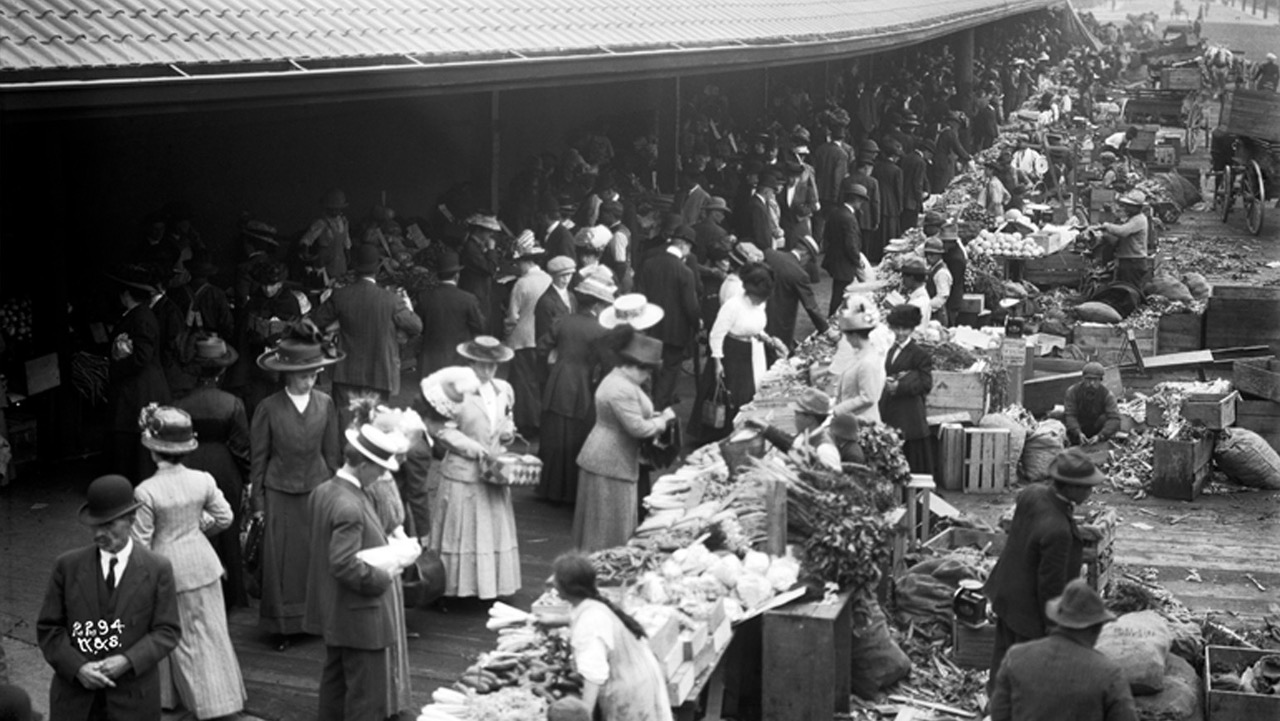 How did you get involved in the project?

RD: MOHAI first contacted me in October of 2014 to see if I had ideas for how to tell the story, so I’ve been working on it on and off for two years.

What came first: the idea for the book or the exhibit?

RD: The exhibit idea definitely came before the book! But we ultimately wanted a way to preserve some of the exhibit and expand on the stories.

When I first met with the MOHAI staff, they asked me if I had any questions about doing the exhibit. I said, “What’s my biggest problem going to be?” One of the designers said, “You won’t have room for everything you want to say.” That was so true, but the book helped get at least some more of the information out there, and some of the really striking photos from MOHAI’s archives. We also got to include some recipes that we think of as Seattle signatures, and artist Julie Notarianni illustrated them for us.

In your research, what are a few things that surprised you?

RD: a. How many times what is old becomes new again. There’s a 1927 letter I love from Pike Place Market warning a vendor against selling spinach from California when local spinach is available (they threaten to confiscate his spinach!). Similarly, back in the 1940s, Angelo Pellegrini was encouraging Seattleites to eat fresh, local, seasonal foods — his writings are absolutely on-point for modern diners. You could also slip some of the menus from oyster bars 100 years ago into a modern restaurant without anyone noticing (except maybe the price list.)

b. How it seems that people have always wanted to find a way to stay in Seattle once they got here, and how prescient some observers were about what Seattle’s food scene would become. Actually, let me quote you a paragraph from the catalog about the Boeing bust years (which in turn quotes Roger Sale): “Given the flagging economy, it might have seemed an odd time for a restaurant renaissance, yet food provided an entry point into business for job-seekers who didn’t want to leave their beloved hometown. Restaurants were perhaps the best example, wrote historian Roger Sale, of a new consumer culture where it seemed everyone laid off from Boeing wanted to turn a lathe or cook an omelet. Young workers and female entrepreneurs entered the field, attracted by small-scale projects that weren’t beholden to banks and didn’t require a corporate slog to the top. “Cheeses, wines and coffees Seattle had never heard of became available,” Sale wrote. It was possible, he presciently suggested in 1976, that this rush of activity could push the city into an era of culinary greatness.”

c. I’ve written about food in Seattle for well over a decade, and I learned so much that I hadn’t known… like the story of the huge Crescent spice company that was based here (now part of McCormick), producers of Mapleine, a hugely popular imitation maple flavoring. Or how every era seemed to have its own version of our Tom Douglas. Again, from the catalog: “In the ‘20s and ‘30s the name Clare Colegrove was “associated with good eating in Seattle,” by one account, with alliterative eateries like the Purple Pup. Walter Clark, known as the dean of Seattle restaurateurs, owned an astonishing 55 restaurants between 1930 and 1970 (including the iconic Twin Teepees), according to old-Seattle expert Clark Humphrey. A critic once wrote that it was unlikely anyone in Seattle had not heard of Clark’s restaurants. A few decades later, it was unlikely that anyone had.”

What primary sources did you rely on for foods and restaurants for Seattle’s early history?

RB: I spent some time in MOHAI’s archives and found some fabulous materials (menus… matchbooks…photographs…cookbooks…the sign from the original Manca’s and the equipment from the Sagamiya bakery!) The museum staff members and public historian emeritus Lorraine McConaghy were also invaluable in helping track down material, from ancient newspaper advertisements to a still-working farm machine used to make berry-picking boxes. Nancy Leson let me raid her archives and interview notes from her decades covering the Seattle restaurant scene. People and institutions were unbelievably generous. Angelo Pellegrini’s children shared stories of their dad and agreed to loan us family treasures. Bob Kramer invited us to tour his workshop and see how he forges his world-famous knives. Jerilyn Brusseau and Greg Komen loaned us original Cinnabon items, including their cinnamon tasting notes from the Restaurants Unlimited Inc. kitchen. Jon Rowley brought us letters from Julia Child (they had a running correspondence on salmon and on peaches, among other subjects.) The Seattle Public Library let us borrow items from the library’s Pike Place Market collection, including a grand old ledger book from the wartime years and buttons from the Save the Market campaign. (Speaking of SPL, their online archives are an amazing resource. When we had questions like “When was Maison Blanc destroyed in a fire?” the library website let us simply search Seattle Times archives from 1895 onward from our desks. (The answer: It was front page news on April 30, 1960.) The owner of the Monorail Espresso cart delayed her own plans for the cart so that we could include it in our displays. “Starbucks Melody,” the blogger, brought over pieces from her personal collection like bottles of “Mazagran,” the company’s first bottled beverage. Mario Batali gave us permission to use a video of his grandmother Leonetta making ravioli… and then, when we visited Armandino Batali and his daughter Gina at Salumi, they loaned us a Merlino olive oil tin that was the “Leonetta” brand, also named for her (Armandino’s grandparents founded the Merlino company.) Serendipity! And the people who are a part of Seattle’s modern food history shared their expertise (including Matt Galvin, who served on the advisory committee) and their stories. The founders of the Beacon Food Forest sent over the original maps for the project; Seattle Neighborhood Farmers Markets dropped off the bells that they ring to open and close the market. Allrecipes staff members did Seattle-based recipe searches for us. The thank you list could go on for pages. 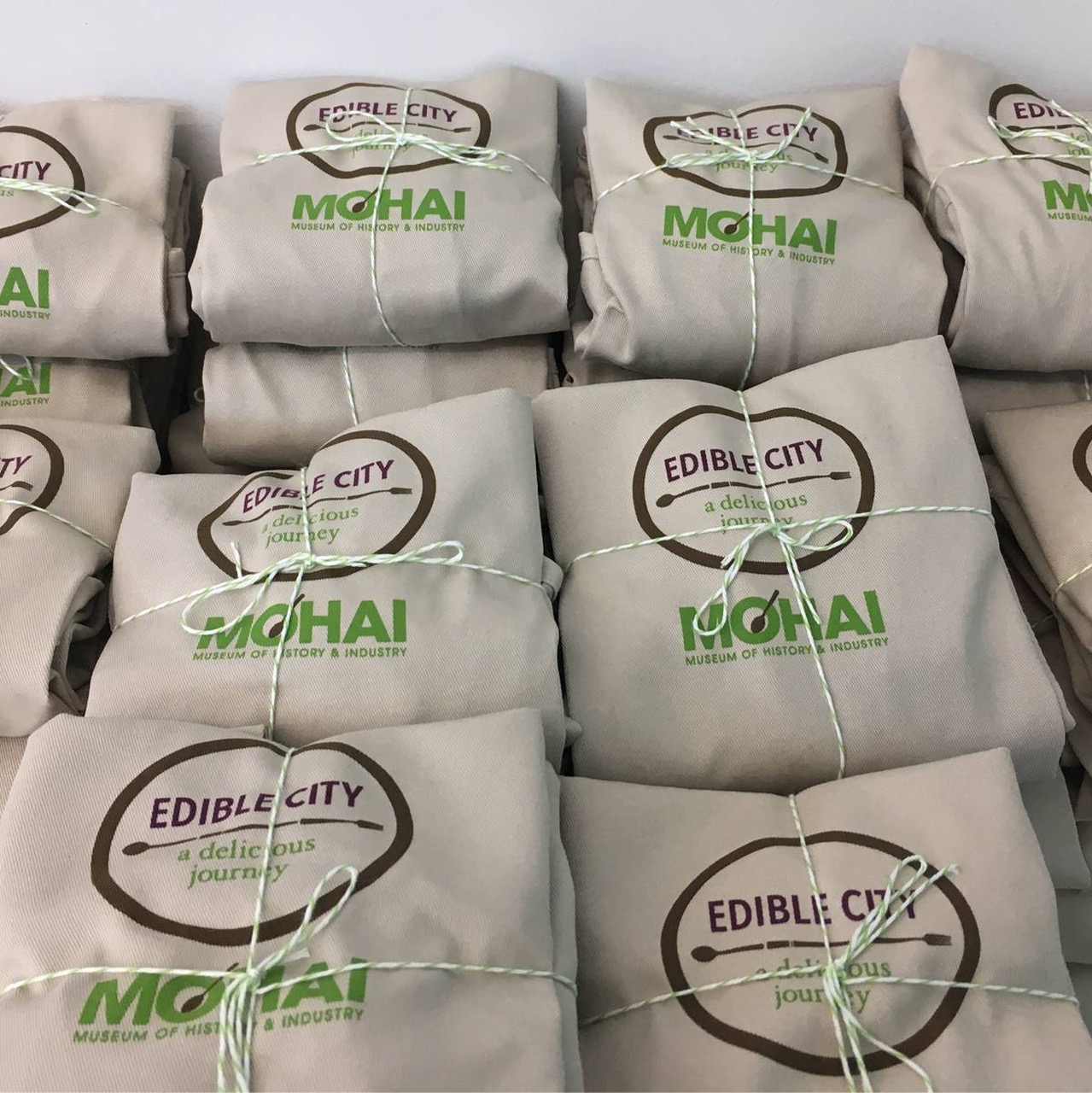