Ethan and Angela Stowell probably don’t need an introduction, but just in case, they’re the couple behind 15 esteemed Seattle restaurants, namely Anchovies & Olives, Ballard Pizza Co. (3 locations), Bar Cotto, Bramling Cross, Goldfinch Tavern, How to Cook a Wolf, Marine Hardware, Mkt., Red Cow, Rione XIII, Staple & Fancy, Tavolàta Belltown, Tavolàta Capitol Hill. Ethan is the chef, Angela the CEO. That they ever relax may come as a surprise, but they make time. I’ve always loved Ethan’s cooking and his dedication to using local and seasonal ingredients. I’m honored that they use Macrina breads at their restaurants. They are wonderful people and one of Seattle’s premier restaurateurs. Learn more about their life outside of the kitchen right here. 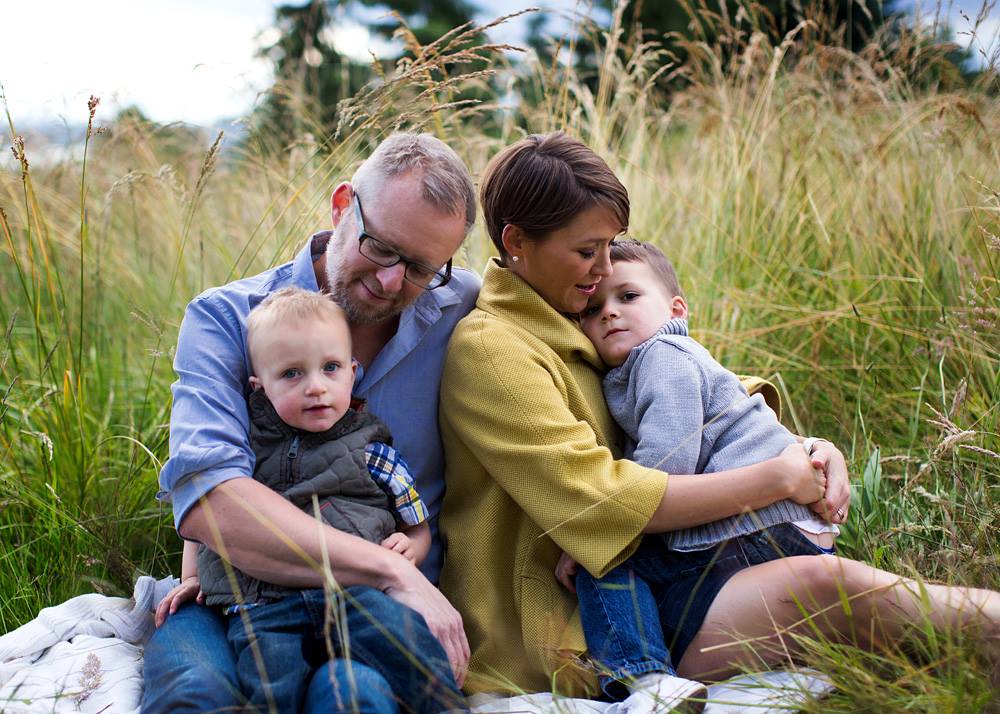 Out of the Kitchen: Relaxing Stowell Style

Everybody knows running restaurants is not for the lazy or the faint of heart. Add kids and a serious commitment to philanthropy and you’ve got a recipe for a life few would call relaxing. Humble, as Angela and Ethan Stowell both are, they’d be the first to point out that they have the support of a great team in all they do. But even with a strong team, Ethan and Angela work long and hard and are pulled in many directions. Still, they remain deeply committed to spending quality time together with their two young children, Adrian and Franklin.

Given their culinary prowess you might expect them to spend their free time teaching the kids how to foraging for chanterelles or morels in the forest, or out on the beach digging for Manila clams. Turns out they’re just like most parents with two young kids, racing home from brunch at their neighborhood dim sum restaurant before their two-year-old, Franklin, falls asleep.

Ethan explains, “Because when you’re doing naps—you know what it’s like having kids—after lunch you’ve got to race home before he falls asleep. If you have a half-hour drive, you’re in trouble. The last thing you need is a twenty-minute power nap.” 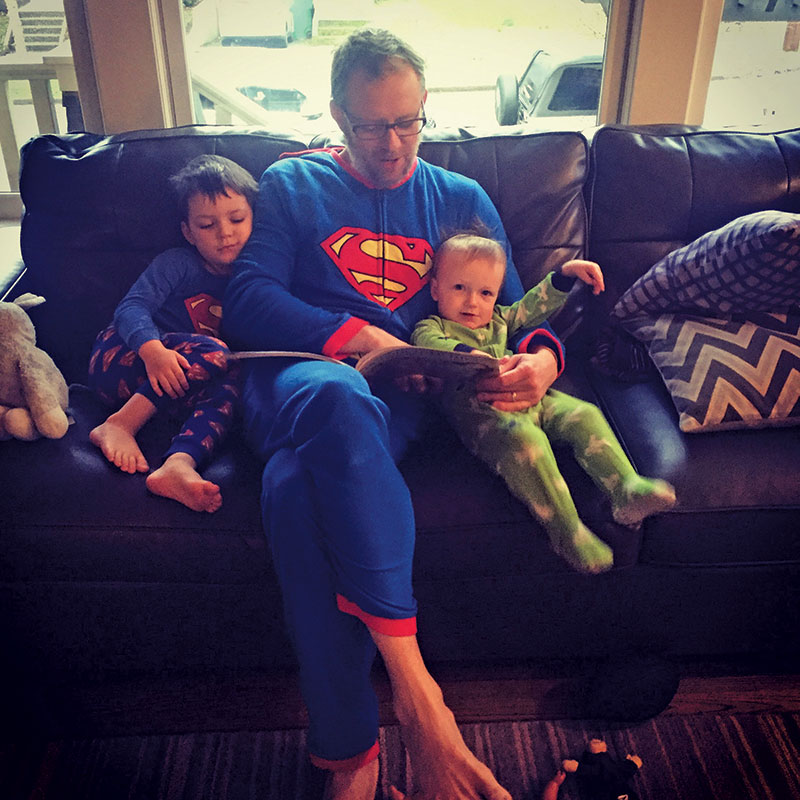 “The nice thing about our schedule is we have family breakfasts every morning because we have the luxury of not leaving the house until nine,” Angela says. “Breakfast is our long time together, kind of the reverse of most families.”

Ethan gets up with the kids and starts breakfast. When he can he gets them involved, often making pancakes, eggs, or oatmeal.

Angela adds, “Well, we try not to do pancakes more than two mornings in a row.”

Presently, in fact, Ethan is skipping the pancakes nearly altogether. About a year ago, he lost over 50 pounds through a mixture of diet and exercise and has kept the weight off. He is very careful about what he eats for breakfast and lunch, then lets loose at dinner. And he is religious about getting in an hour of exercise each day. Angela has always been a fitness and health advocate.

“Before having kids I did lots of triathlons and a half ironman,” Angela says. “I’ve been a runner for a long time. For me, it’s a stress relief. This may not be the most romantic thing in the world at 9 p.m., but if we’re both home, when we get the kids to bed, we’ll both go exercise. Sometimes it’s the only time we have, especially if it’s a Sunday and we’ve been busy with them all day. We both get our hour workout in. 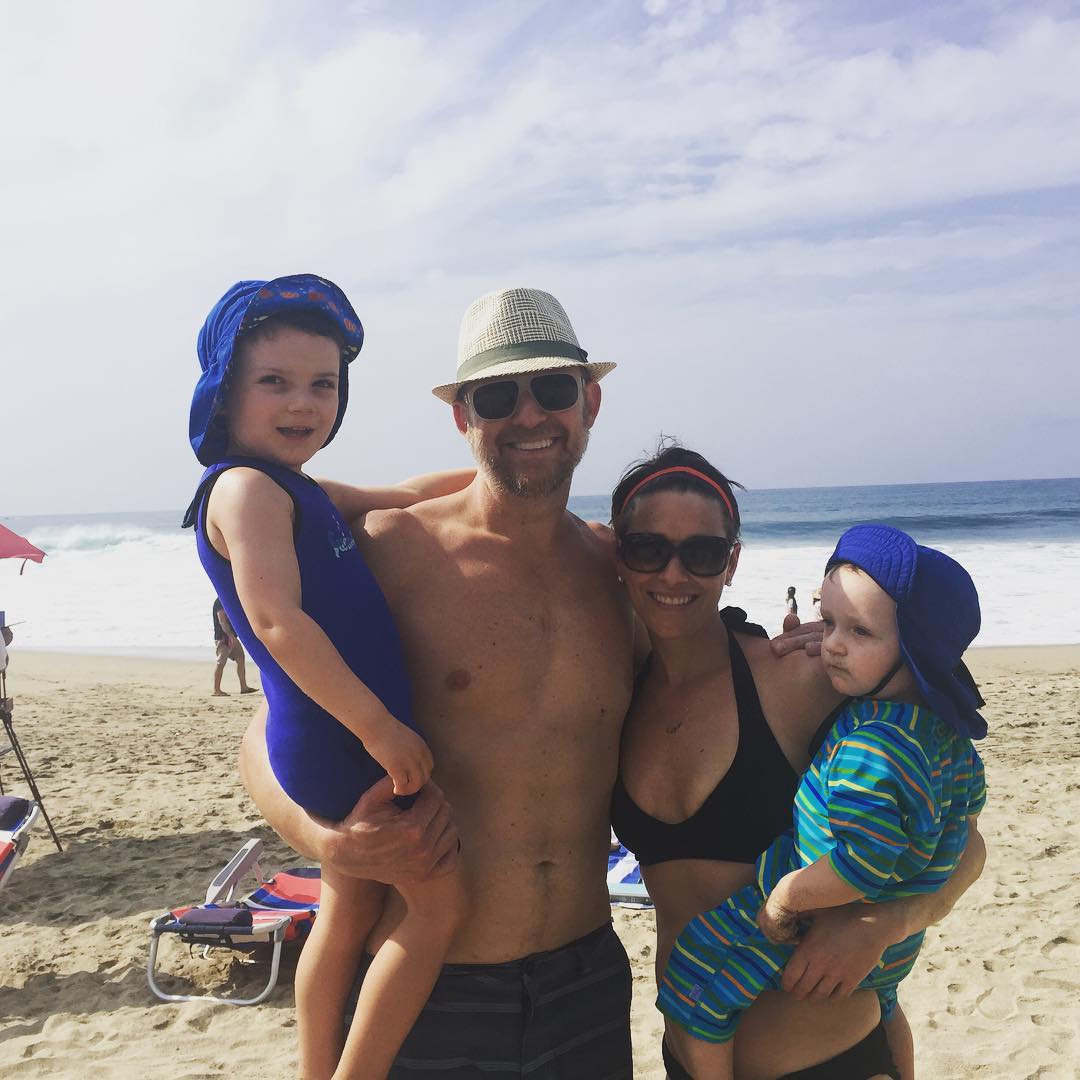 One key block of time for Angela to sneak in a long run is Saturday mornings when Ethan and a group of dads take the kids out without the moms.

“Saturday I just work a half day, so it’s dad and kid time,” Ethan says. “I have a friends’ group of five to six guys. A text thread goes out. Not everyone can make it every time. We meet somewhere at ten, go to the zoo, or the Science Center, or Golden Gardens. Then we get lunch and rush home for nap time.”

In the summer, weekends are often spent on Whidbey Island where Ethan’s parents have a vacation home. The island is Angela’s favorite place to be.

“Our weekends there are kind of always the same,” Angela says. “In the summertime we go to the farmers market in the morning, we go to Primo Bistro, we always go to Moonraker Books to check out what’s happening there and visit the owner Josh, then we visit a couple of farms with stands, maybe grab a loaf of Screaming Banshee bread. The cool thing about Whidbey is that there are a lot of people who knew Ethan when he was five years old. Those people are now super invested in our family.”

In Seattle, when the Stowell’s have the occasional night together they frequently go out to eat.

“We are definitely a family that doesn’t shy from taking them out to restaurants,” Ethan says. “I’m a big believer in bringing kids to our restaurants. You want kids getting used to eating good food, getting used to being out socially.”

In fact, this January they will be starting a family dinner night at Rione.

“I’m super excited about it,” Angela says. “From five to seven anybody who makes a reservation will be told that there will be kids around. It’s an opportunity for families to come out with their kids. Don’t feel bad if things get spilled. It’s gonna be hard to keep the kids in their seats.”

“There’s gonna be spaghetti on the windows,” Ethan says with a smile.

Angela adds, “We’ll be there. And at some point our kids will have iPads out. I think it’s good for parents to see that it is okay to do what you have to do to get through dinner at a restaurant. Because it’s not always going to be like this, and sometimes you just need a moment’s peace to finish your wine.” 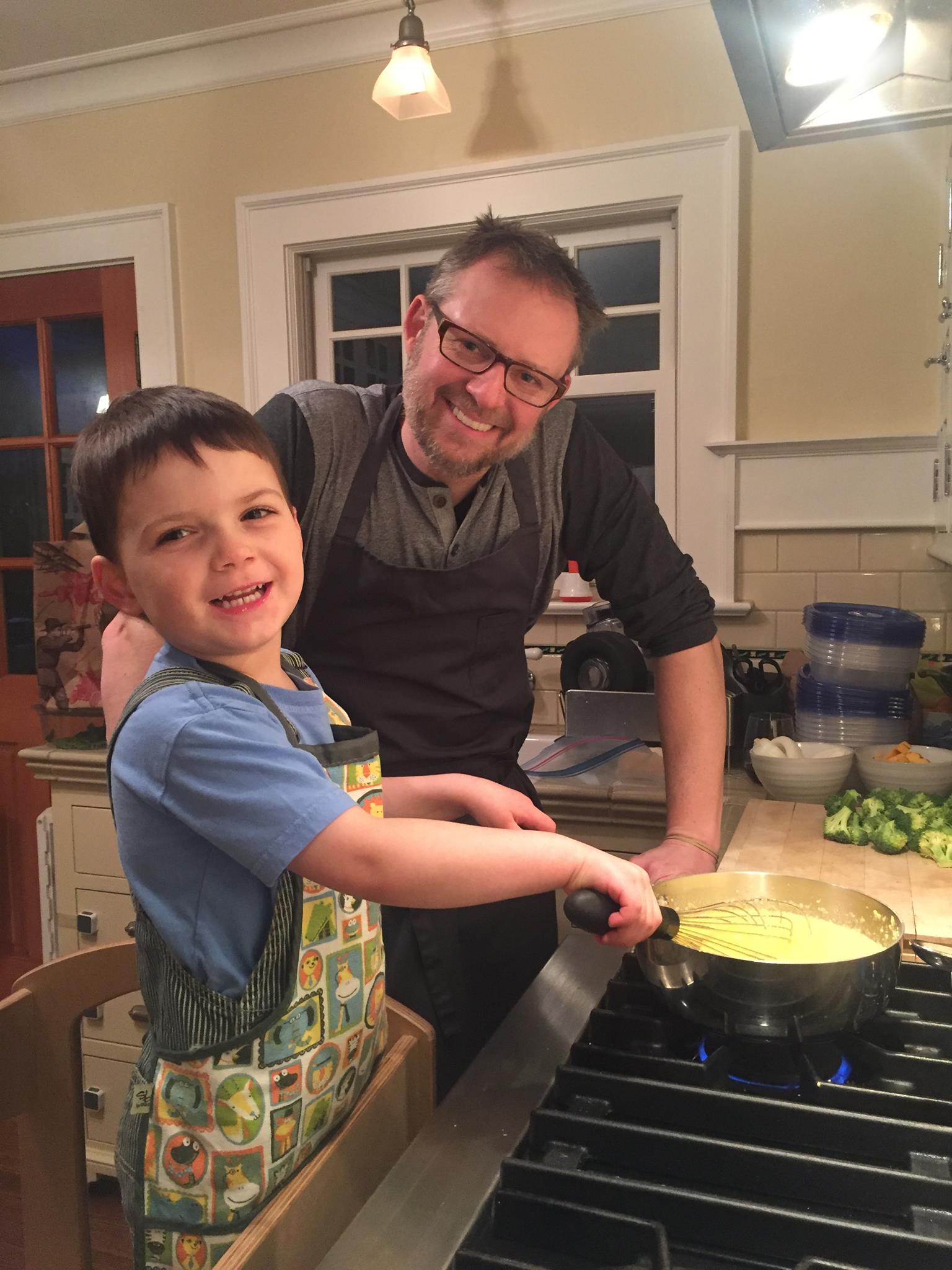 While they may be a more high-profile couple than most in Seattle, they both stress that their private lives are much like any other family.

“My life isn’t much different than any working mom,” Angela says. “You wake up and someone needs you right away—this morning it was who gets to sit next to mom—then you go to work and someone needs you. Then you get home and they need you again. Then maybe I squeeze in a little workout. Not anything different than any other working mom. We’re just really appreciative of the window of time we get together.”

Visit www.ethanstowellrestaurants.com to learn more and make reservations at your favorite spot. 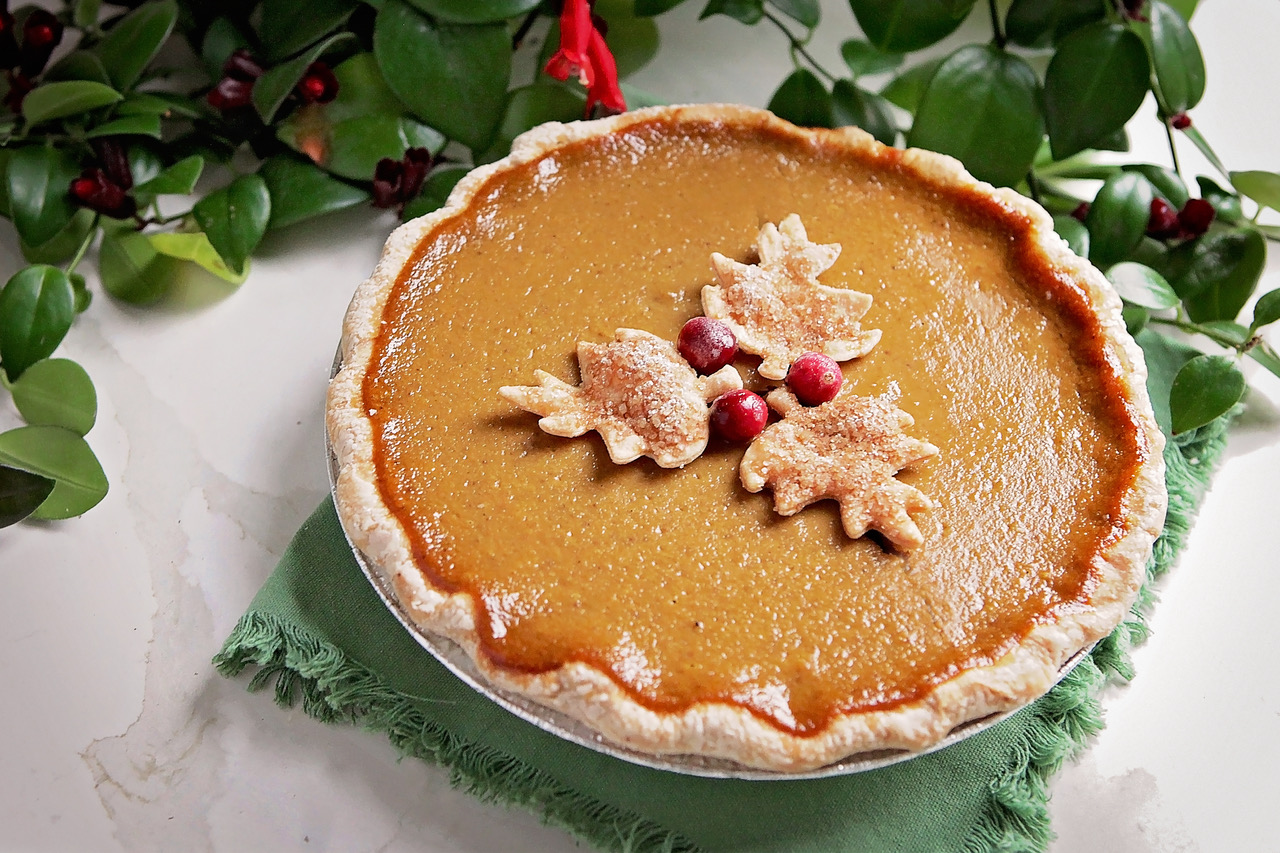 Little is more satisfying than cooking from my garden’s bounty. It represents months of work and patience. Every vegetable started as a seed I planted, nurtured and harvested. And while the process is on a much larger scale at Macrina, it is still just as fulfilling. Yesterday, the first crates of butternut squash (more on this secret later) were delivered for our Thanksgiving pies. I didn’t grow them myself, but I worked with local grower extraordinaire Oxbow Farm in selecting the seeds and establishing the quantities we’d need.

Oxbow Farm gets their seeds from Johnny’s Selected Seeds. Johnny’s has been around since 1972, is 100% employee owned and does not use genetically engineered plants or seeds. Our squash began with a hybrid seed called Metro PMR. It has superior flavor, resists powdery mildew and matures relatively quickly. Butternut is a moschata species of squash, which can be hard to ripen in our region’s limited growing season.

Butternut squash plants are tender, and their seedlings are especially susceptible to frost damage. Before planting growers have to wait until the soil is warm and the danger of a cold snap has passed. In the Pacific Northwest this means no earlier than May. The growers at Oxbow sow the seeds in a large protected hothouse to give them a head start. Because the seeds sprout quickly and are susceptible to becoming root bound, this can’t be done too early. Once they reach transplant size in the nursery there is quite a scramble to get so many tender plants out to the fields with enough time remaining for them to mature before the first fall frost. 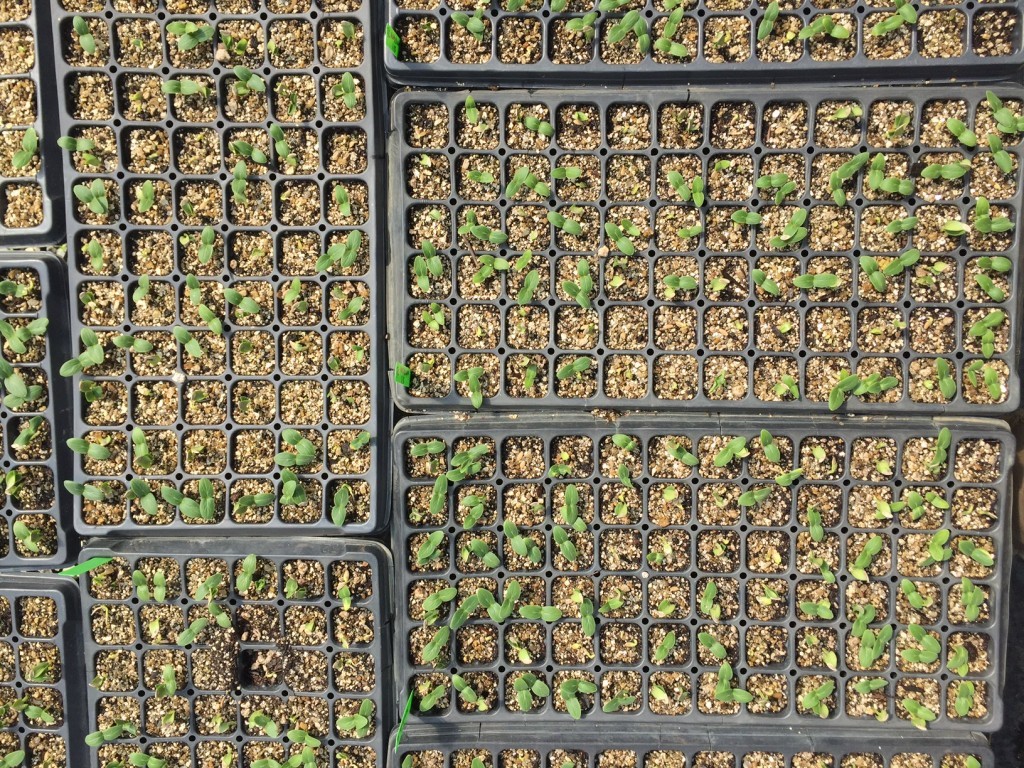 Like zucchini, the butternut squash plant sends off several vines as it grows, some as long as 15 feet. Lots of work is required to keep the plants weed and bug-free. After flowering, two or three young squash will grow off each vine. Green at first, tan vertical stripes emerge as the squash ripens. Eventually the green fades and is replaced by the matte tawny color of the mature fruit.

Depending on the weather during the growing season, the squash are harvested anywhere from mid-September through mid-October. This year, at Oxbow, the butternut were ready later than the other varieties of winter squash. The crew at Oxbow harvested them all in mid-October.

More than six months after choosing the seeds it was a joy to hold the ripe squash. Each is unblemished and heavy in the hand. Cutting one open, I found the orange flesh inside creamy and sweet. Perfect for pie.

To make our pie, we cut the squash in half, remove the seeds, and roast them on a sheet pan lined with parchment paper. Once the roasted squash cools, the skin peels off easily. Roasting them concentrates the natural sugars, and they puree beautifully. With the butternut squash we found we needed both less sugar and less cream in our recipe to create the perfect texture and taste for our pie. 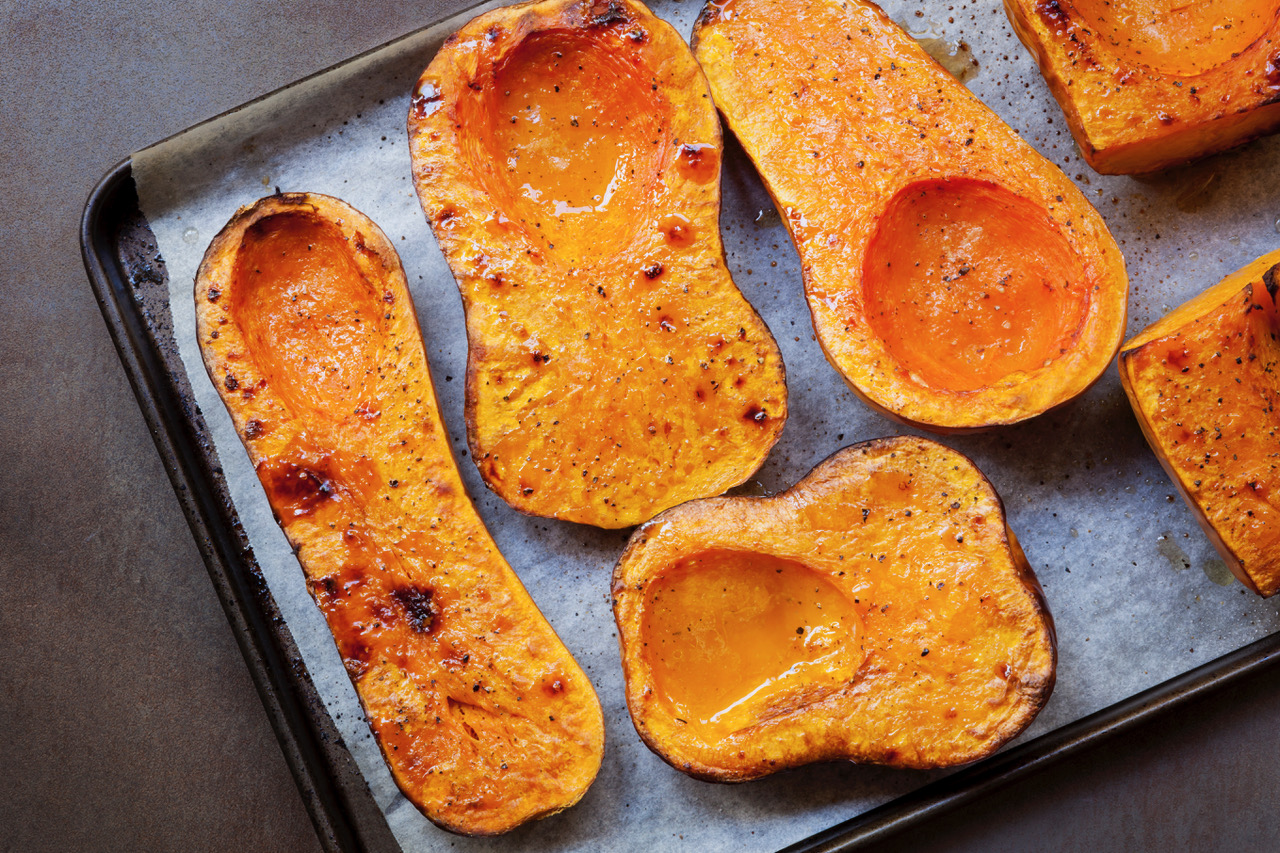 The week of Thanksgiving is when our bakery floor gets truly insane. We start by roasting the squash and the pie shells. Then the filled pies shuffle in and out of our ovens. At the cafés, managers and crew pull together the long list of pre-orders that customers have placed throughout the month. Thanksgiving Eve managers and crew are usually at the cafés by 3 a.m. to be sure every order is ready to go, as well as plenty of extra stock on the shelves to accommodate last minute shoppers.

And when it’s all done we do the same thing you do. We gather with our families and friends for a feast. It’s one of my favorite days of the year. I love every part of it: decorating the house, setting the table beautifully, organizing the beverages, and—the best part—cooking the Thanksgiving dinner. Because there are so many dishes to prepare and only so much time, I always rely on Macrina Stuffing Mix, a selection of bread and rolls, crostini and a few of the appetizer spreads, and, of course, our pies. The pumpkin pie is my all-time favorite. The sweetness of Oxbow’s roasted squash with brown sugar, maple syrup, cinnamon, allspice and ginger is perfect with slightly sweetened whipped cream.

Our Thanksgiving menu is now available for the whole month of November. We will be taking advanced orders for the holiday through noon, November 21st. 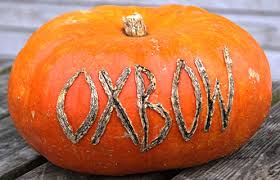 Oxbow Farm & Conservation Center cultivates 30 acres of vegetables, tree fruit, and berries on the banks of an oxbow lake in the lower Snoqualmie Valley. We have been growing food for our customers for 16 years. Our produce is available throughout the greater Seattle area at independent grocery stores, restaurants, and most importantly, through our Community Supported Agriculture (CSA) program.