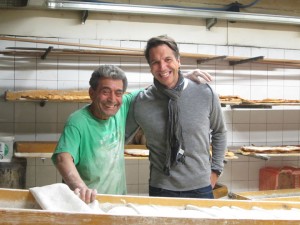 Our Giuseppe bread is an interpretation of the classic Italian loaf. Years ago, while Leslie was having dinner at a pizzeria in Rome, she noticed the bread being served at a nearby table. Intrigued, she asked to try some and was amazed at how good it was. In fact, it was the best bread that she had ever tasted. After learning the name of the baker, she and her traveling companion spent the next morning searching for Panficio Arnese. By the time they finally found the bakery, the owner and head baker, Giuseppe, had finished baking for the day, but welcomed them into his bakery. They spent a few hours talking about his bread, which he made with little equipment, no refrigeration and an oven that was fueled by hazelnut shells. After Giuseppe offered her some of his freshly baked bread, Leslie was literally speechless. He seemed to be surprised by her admiration, insisting that it was “only bread!”

When Macrina co-owner Matt Galvin met Leslie in 2006, one of the first things that she talked about was Giuseppe and his bread.  Matt decided that he had to taste the bread that had influenced Leslie so strongly. On a recent trip to Rome, he sought out Giuseppe’s bakery, which was not an easy feat. Between the winding streets and the rather interesting way that the buildings in Rome are numbered, (residential and business addresses are numbered differently), Matt had to guess where the bakery was. When he saw that the street in front of one of the storefronts was covered in flour, Matt knew that he had found the right place. More than 20 years after Leslie had visited the bakery, Giuseppe was still there making the breads and pizzas that have made him a local favorite. When Matt related the story of Leslie’s Giuseppe bread to him, he had quite a chuckle over it. After Matt enjoyed some of Giuseppe’s delicious bread, he understood why it had such a profound impact on Leslie.

The Giuseppe loaf is a staple at our cafes, and is usually available. Of course, you can always guarantee that there will be one waiting by calling ahead!