In May, after years of development, we introduced Macrina’s Organic MadRy Sourdough Bagels to great acclaim. Now, to the four original flavors—Plain, Sesame, Poppy, Sea Salt—we’re adding the Everything Bagel. We coat our Everything Bagel, top and bottom, with a mix of white and black sesame seeds, blue poppy seeds, salt, fresh garlic and onion. Most producers use dehydrated onion and garlic flakes, but we were determined to use fresh ingredients. 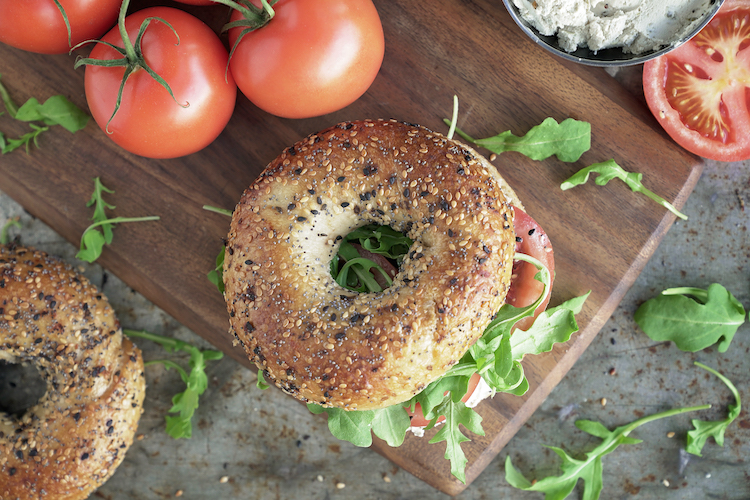 “We had a tough time initially with the chopped garlic burning, but after much trial and error came up with a great result,” says Leslie Mackie, Macrina’s founder.

“The well-balanced taste of garlic and onion melds nicely and doesn’t overpower the flavor from the seeds and sourdough,” says Blake Gehringer, Macrina’s Production Manager.

Our MadRy Organic Sourdough Bagels are hand-rolled, given a slow, cool 24-hour ferment, and have just a hint of rye, which adds to their depth of flavor. The caramelized crust has a glossy sheen and the airy interior has a tight, springy crumb that balances the mild tang of sourdough with just enough malty sweetness.

All of our ingredients come from the PNW:

•      The organic high-protein flour comes from just north of the border.

•      The organic rye flour comes from Fairhaven Mill in nearby Burlington. 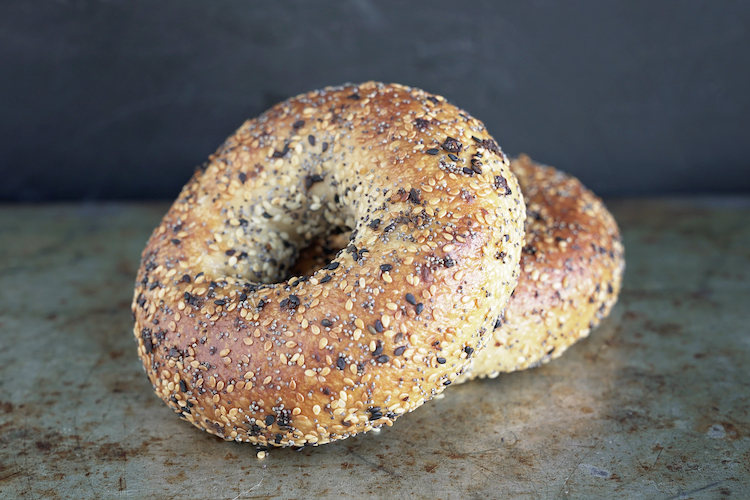 We start with a significant percentage of organic sourdough starter and a smidge of yeast. After an initial rise, we handroll the bagels and give them a full day’s cool ferment. The depth of flavor you’ll taste in these bagels comes from the natural leavening and that hint of rye.  The whiff of sourdough you get when you tear one open comes from the starter. We were careful not to let the flavor dominate but wanted it to be distinctive. “It should make sense when you taste the bagel that the name has sourdough in it,” says Scott France, Macrina’s President and Co-owner, and the driving force behind these bagels. “But if you tasted the bagel without knowing the name, someone intimately familiar with sourdoughs would recognize it, but if you didn’t, you might wonder just what that mild tang was.”

The bagels are available individually or as four-packs.

With sweater weather fast upon us, it’s time to cozy up with a bowl of soup. Not only have we resumed selling it at our cafés, but we’re also introducing a line of favorite Macrina soups packaged for you to take home to heat and serve. 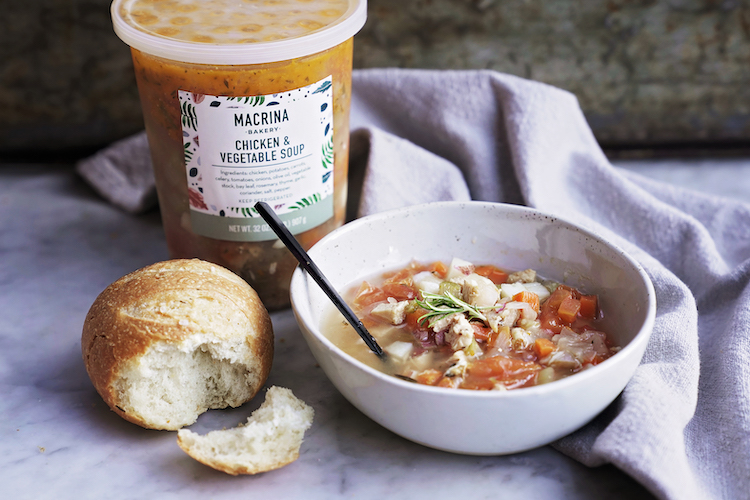 “I love a bowl of soup on a crisp fall evening,” says Leslie Mackie, Macrina’s founder. “The simplicity of soup on those early, dark nights, and the aroma that fills the house as it’s heating, is soul-satisfying. And there’s nothing better than dipping a buttered slice of crusty bread in soup.”

Our first two are Tomato Bisque and Chicken & Vegetable. They come in 32 oz. containers, which is enough to serve four. Add a salad and a loaf of crusty bread and you’ve got dinner.

The Tomato Bisque is silky smooth and gets its deep, rich flavor from ripe tomatoes, roasted red peppers, fennel, rosemary, and thyme. The soup is thickened with rice and gets its velvety texture from being pureed with olive oil and cream. Perfectly paired with our grilled cheese sandwich.

The Chicken & Vegetable is our version of the classic hearty soup. It’s loaded with chicken and chopped vegetables in a fragrant vegetable stock seasoned with rosemary, thyme, and garlic. 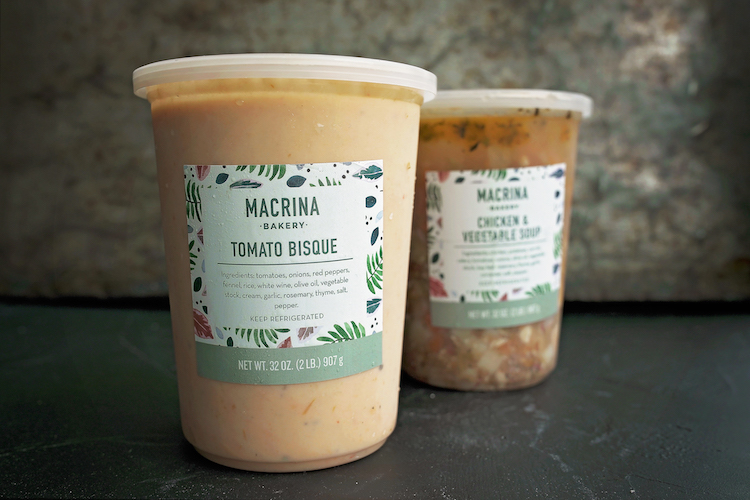 Stop in one of our cafés to grab a healthy soup and a loaf of your favorite bread. Also available for delivery through DoorDash.

On Leslie’s Vashon Island farm, there is one very productive Italian plum tree. The blue plums have a sweet yellow flesh that is ideal for an unforgettable fruit conserve. For those of you not yet familiar with Project Barnstorm, Leslie’s new line of fruit spreads, it’s a tasty celebration of the seasons. By picking the fruit at its peak, or buying it straight from some of the best local farmers, the fruit spreads capture the natural essence of the fruit. Leslie’s fruit spreads have less sugar than jam, allowing the ripe fruit’s natural sweetness to shine through. Opening a jar at any time of year brings summer right back. 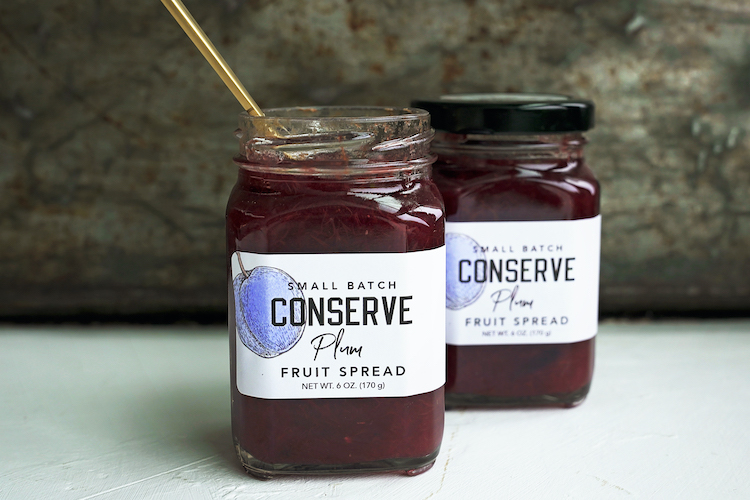 Leslie’s Plum Conserves get a lovely dimension of flavor from just a hint of fresh rosemary. The Plum Conserves are delicious on a cornetto or yogurt fruit bowl or served as a dollop with roast chicken or pork loin.

While it may be tempting to open the jar right away, you may want to add it to your larder. Larder is a little-used term these days, but most houses built in pre-refrigeration days had one. Usually built on the north side of the house, close to the ground with a mesh window to allow air to circulate, larders were food storehouses. Because they weren’t cold like a refrigerator, much of the summer harvest was cooked and stored in sealed jars. With freezers and refrigerators, it sometimes seems that food changed from something we make to something we buy. We lost something essential in the transition. While you might not be doing the growing and jarring yourself, bolding a larder containing farm-fresh specialties will connect you to the land all winter long. There’s a special joy that comes from pulling a favorite treat from your larder and dressing up your meal with the sweet flavors of summer.

At our cafés, we have served this conserve on a Ricotta-Stuffed Brioche French Toast and have used it on a Rosemary Ham & Brie Sandwich. For the holidays, we love to serve it with Dinah’s Cheese from Vashon Island or Cambozola Black Label with our Sardinian Flat Bread. Or keep it simple and dress up a bowl of vanilla ice cream with a dollop of Plum Conserves and a few roasted almonds for crunch. This very versatile condiment will be hard to keep in your larder for long, but you won’t be sorry.

Makini Howell makes incredible plant-based food. For her, eating vegan comes naturally. Not only was she raised in a vegan family, but her family has been in the food business for over 40 years. “It was my mom that started our company,” Makini says. “She still has a restaurant in Tacoma, and my sister actually makes the cookies for Plum.”

Plum Bistro, on 12th Avenue on Seattle’s Capitol Hill in the lively Pike/Pine corridor, is an airy, contemporary space. In pre-Covid times, first-rate servers delivered beautiful plates of food to a bustling room of diners. A glance at a stylishly arranged plate of Makini’s seared spiced tofu with fried avocado, greens, chile powder, and black bean puree, and you might think it was topped with a piece of grilled halibut. But Makini isn’t trying to replace animal proteins in any way. In the introduction to her cookbook she says, “I’m really not trying to replace anything because I don’t feel…like I’m missing anything. I’m just using other sources of protein.” 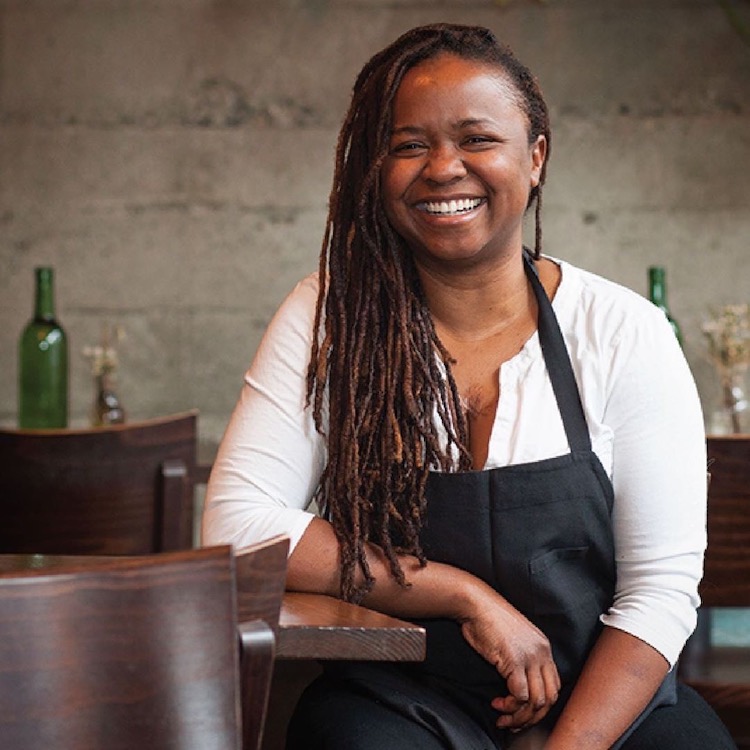 This approach has won her legions of fans in Seattle and beyond—in 2019, The New York Times recognized her as one of 16 Black chefs changing food in America. Her creative, healthy approach to food and consistently beautiful dishes have led to a steadily growing vegan food empire in Seattle.

Of course, for now, Covid has forced some closures. “We’ve had to close down our Sugar Plum, our food truck, and our Seattle Center store,” Makini says.

Fortunately, Plum Bistro and Plum Chopped (a fast-casual walkup counter next to Plum Bistro featuring hearty salads) are open for dining and takeout, with dining capacity at 50 percent. “We do a lot of family meals now, they’re affordable and conscious of the fact that a lot of people are out of work,” Makini says.

For health reasons or environmental ones, a growing number of people have started eating plant-based diets. Makini, who can make carnivores forget there’s no meat in the food, has been a significant influence. And despite the many accolades she’s received, and the many loyal fans she has throughout the city, she continues to challenge herself in the kitchen. In the introduction to her cookbook, she explains, “This idea of changing the way you taste pushes us to experiment and recraft, to look at our dishes from outside the box and try to make them even tastier, more indulgent, and more vibrant.”

Drop into Plum Bistro or Plum Chopped, or order takeout. They need your support to get through this unprecedented challenge, and our

The aroma of roasting chicken with the deliciously fragrant, pear apple smell of baking quince will warm your heart on a crisp, fall evening. The combination of allspice, cinnamon and chimichurri spice with the fruitiness of the apple cider adds complexity to the caramelized onions, carrots and quince. The pan drippings make the perfect au jus sauce. I recommend serving this autumnal dinner with basmati rice and a kale Caesar salad! 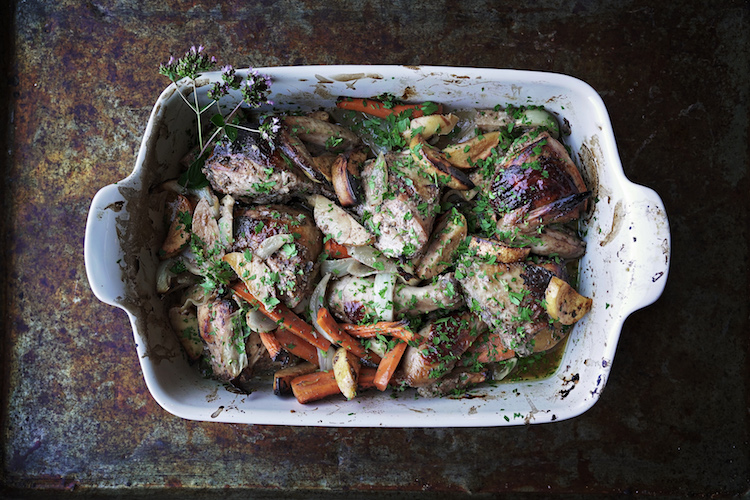 *Cutting raw quince is difficult. A quince resembles an apple, but it’s much firmer. Using a sharp chef’s knife, I make the first cut straight down, just to the side of the core. Then I turn the cut side down and repeat until I’m left with a 1½-inch square (the core). I then cut the pieces into ½-inch slices. They will oxidize and brown, so tossing them with the marinade soon a er they are cut will help prevent that. However, they brown as they cook, so a little oxidation won’t show. 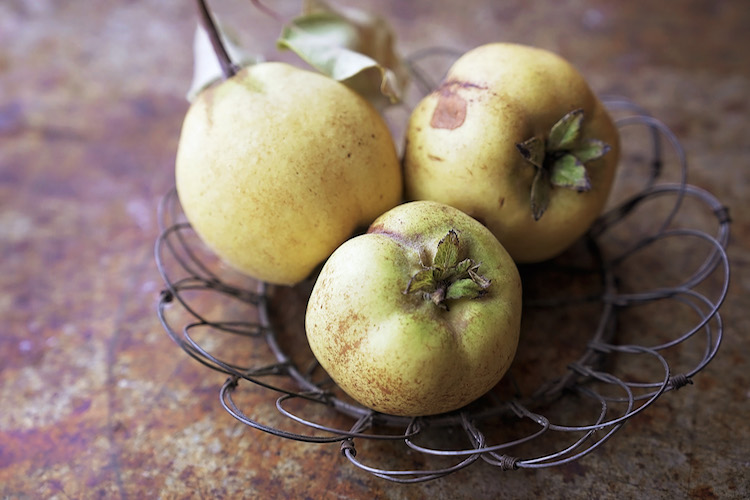 In a medium saucepan, combine the apple cider, white wine, garlic, oregano, thyme, salt, cinnamon, allspice and chimichurri spice. Warm over medium heat for 3 minutes and let cool. Reserve ¼ cup of the marinade to later toss with the onion, quince and carrot.

Place the cut chicken pieces into a medium bowl and cover with the cooled marinade. Press the chicken pieces down until they are all submerged. Cover with plastic and allow the chicken to marinate in the refrigerator for at least 2 hours or overnight. In a separate bowl, toss the reserved marinade with the onion wedges, quince and carrots. Refrigerate until ready to roast the chicken.

Place the chicken into the pan, skin side up in a single layer. Add the remaining 2 Tbsp olive oil to the marinated vegetables and toss, then add them to the baking dish, tucking them in gaps to create a single layer for even cooking and browning. Pour any remaining marinade over the top.

Bake for 35 minutes or until the chicken is browned and cooked to your liking (chicken should reach 165°F). 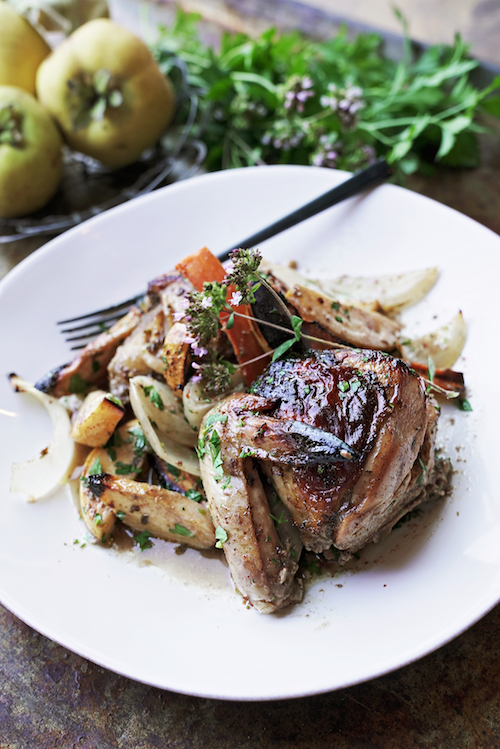