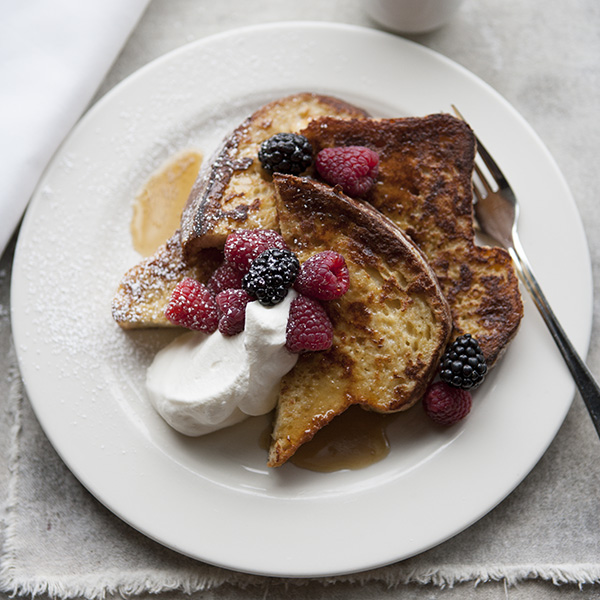 French toast is the king of weekend brunch. Each week, Head Savory Chef Elizabeth Hall creates a fabulous French toast for our menu. It’s usually stuffed with something amazing like sweetened ricotta or pear butter and topped with anything from seasonal berries and crème fraîche to toasted nuts and whipped cream. As we carry these stacks of toast piled high through the café, it’s never a surprise to hear people swoon. At the end of brunch service we know we’ll find plates scraped clean and lots of happy customers.

The best French toast starts with simple ingredients found in most kitchens and a really good loaf of bread. We reach for generous slices of buttery, sweet Brioche to soak up the eggy custard and caramelize in the pan. Adorned with a dollop of cream or a healthy pour of thick maple syrup, doesn’t matter. A delicious bread is the heart and soul of this meal.

Through Mother’s Day, you can pick up a loaf of our toothsome Chocolate Orange Brioche attached with the recipe for our favorite French toast. Whether you’re surprising Mom with breakfast in bed or treating someone special to an easy weekend brunch, this French toast will make anyone feel loved. 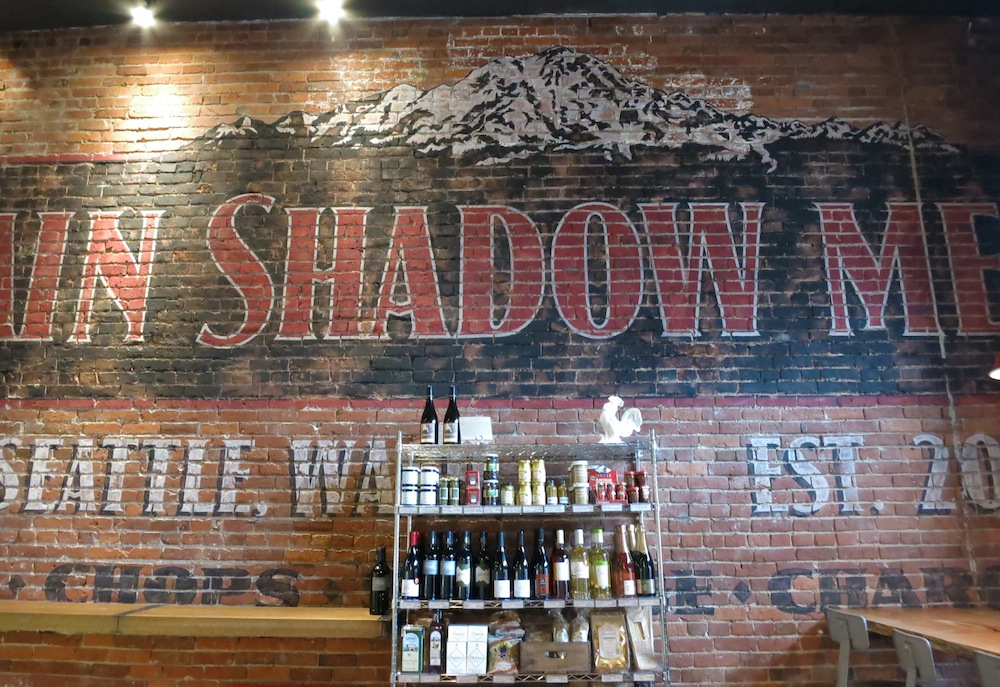 Tucked into Capitol Hill’s adorably hip Melrose Market and a new location situated in up-and-coming Pioneer Square, our wholesale partner Rain Shadow Meats is quickly becoming Seattle’s favorite butcher shop. We sat down with Owner Russell Flint to talk about how he’s changing the butchery business for the better, what’s on the horizon, and which cuts of meat you should be eating.

We use everything. We throw some fat and little weird bits that we can’t really do anything with into the compost, but those bones don’t go into the compost until they’ve been worked into stock twice. We are really, truly utilizing every bit of these whole animals that we’re given, which I think is lost on a lot of people. But to me, it’s rad. Nothing goes to waste. Not too many butcher shops can say that they do that.

Are people going for the odd cuts of meat or do they tend to stick with what’s familiar?

Regular customers, people who trust us and have been coming to us for a long time, they ask, “Hey, what should I eat today?” or “What’s cool in the case today?” But the average consumer comes in knowing what they want. They want a ribeye and if there aren’t any ribeyes, they walk out the door. But as you a develop relationship with the customer, they start to trust you, you learn about them and what they like, and you can set things aside for them.

What cuts should people be buying that they may not know about?

I love pork top sirloin. As far as I’m concerned, that’s the butcher’s cut. Not a lot of people know about it. It’s much cheaper than a pork chop but it’s just as good if not better. There’s also a true country-style spare rib, which is where the shoulder ends and the loin starts. Those pieces are always super cheap and really delicious; way better than a pork chop. For beef, I love the top sirloin. It’s a big muscle but usually cheaper than say your ribeyes and tenderloins. You don’t see beef neck very often, but since we butcher the whole animal, we get the neck from the beef. Beef neck braised together with some beef shanks is insanely good.

What do you have in store for Easter?

For Easter, lamb and ham are the meats people want. We work with a smokehouse in Oakland, California. This guy double smokes our bacon, so we asked him to do the same process with our hams. They’re honey cured and then he smokes them with applewood and cools them down and then smokes them again with maple. They turn out this beautiful lacquered dark brown and are absolutely incredible.

Our lamb mainly comes out of Anderson Valley just south of Portland at Anderson Ranch. Reed Anderson has been farming and ranching his whole life and we’ve known him for years. He has beautiful pasture-raised, grass-fed lamb. That area of Oregon is really conducive for lamb as far as the grass and year-round climate goes; it’s super-consistent all year long.

Any plans for a third location?

This is it! The [Pioneer Square] project was huge, a lot bigger than I really anticipated it being. What I’m trying to do is kind of incredible. I don’t think everyone quite gets it yet or they don’t know how to use it yet, but we’ll get there. It’s all about education. As far as a third location goes, I have some ideas. Not another butcher shop, maybe a restaurant or something. Obviously something with food, but it’s going to be a long, long way down the road.

In addition to stocking both locations with every cut of meat imaginable, Rain Shadow Meats in Pioneer Square serves up delicious sandwiches piled high on our bread, housemade charcuterie and rotating specials. Wash it all down with a glass of French wine, a pint of local craft beer, or the savory fizz of celery soda fresh from his girlfriend’s shop, Seattle Seltzer Co.