I had the pleasure of dining with Phuong Bui, Macrina’s head baker, and his wife at the SkyCity restaurant to celebrate his 10 year anniversary. It was a big treat and fun for him to see the bread he bakes on the tables of one of the most iconic locations in the country. Nothing beats the remarkable view or the delicious food of this longstanding Seattle restaurant. 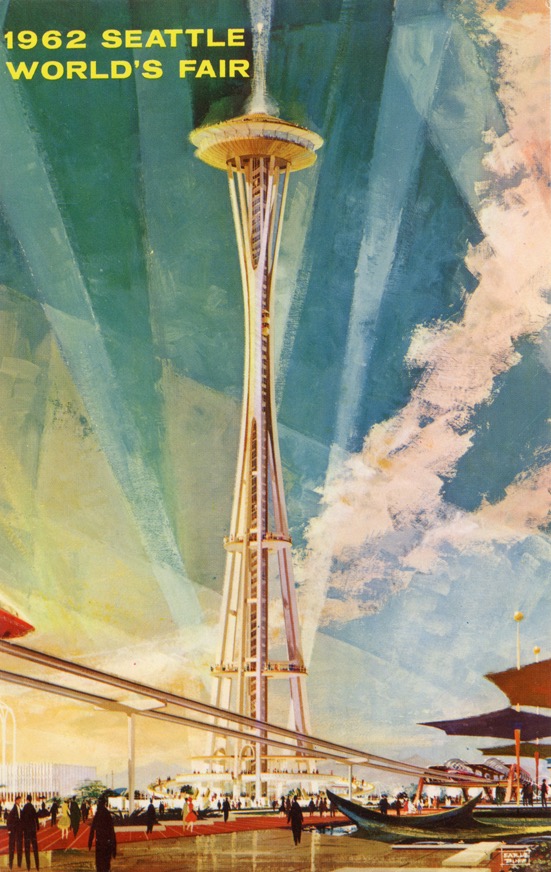 Imagine this: It’s 1961. Seattle is soon to host the World’s Fair. You walk into a bank and announce that you plan to build the tallest building west of the Mississippi and slap a revolving restaurant on top. Oh, and so it’s ready in time for the fair, you need to build it in about 400 days. Might as well ask for a time-traveling DeLorean while you’re dreaming.

But somehow they pulled it off, sans the DeLorean. A group calling itself the Pentagram Corporation, which included a few of Seattle’s most recognizable businessmen, didn’t need a bank loan. They were the bankers and developers of the day. The risk was sizable. 550 feet of risk. 467 dump trucks of cement poured to a depth of 30 feet of risk. $4.5 million dollars of risk. They sought nothing less than to present a vision of the future to the rest of the world. 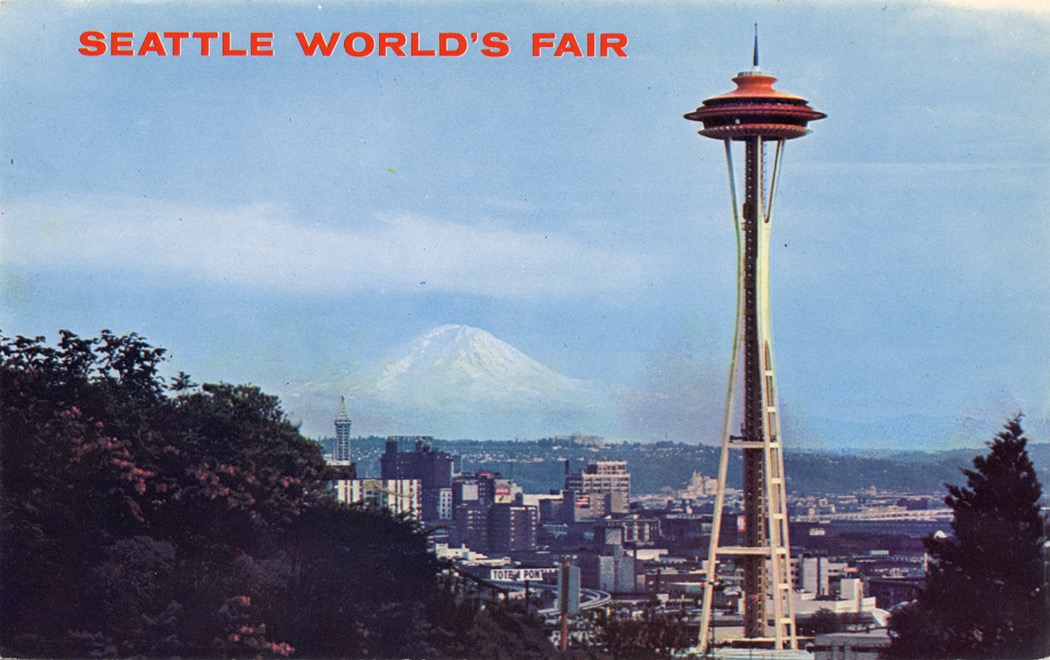 Billed as The Century 21 Exposition, the World’s Fair of 1962 in Seattle also featured the monorail. Just before the fair opened The New York Times wrote, “The high-speed, quiet monorail cars catapult northward from the heart of Seattle for a few breath catching moments, then glide to a stop. There suddenly, all around you, are glimpses of the world of tomorrow.” The monorail was the time-traveling Delorean carrying hordes of visitors to the world of tomorrow.

Back then, world’s fairs were major spectacles, attended by people from around the globe. Seattle was a company town, a yawn of a city that functioned as a Boeing bunkhouse, and a long ways from growing up and joining the ranks of major American cities. Much of the world then thought Seattle rhymed with fetal.

As the structure went up, doubters arose. The Committee Hoping for Extra-Terrestrial Encounters to Save the Earth—CHEESE (an appropriate acronym) claimed to have plans from the 1962 World’s Fair that show the Space Needle was constructed to send transmissions to advanced beings in other solar systems. True story. 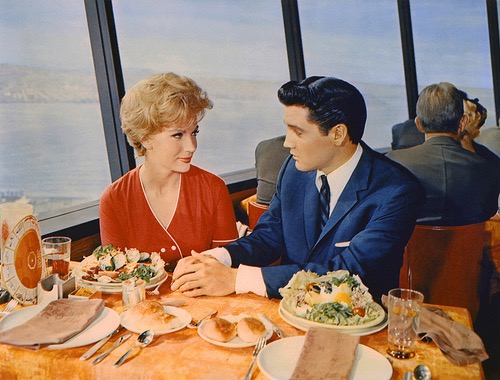 Fast forward a little more than 50 years and Seattle has been transformed from the scenic hillside town without an interstate to one of the fastest growing major cities in America. In the shadow of the Space Needle, South Lake Union has been transformed by Amazon’s growth. Boeing is still a major employer, but the local economy has diversified, much of its new growth driven by the technology sector.

While some today consider the Space Needle an anachronistic vision of the future, more Jetsons than anything that looks like the future today, it has always symbolized a city leaning into the future. So, when the weather is clear, take the elevator up 500 feet to the SkyCity restaurant and enjoy the Macrina potato rolls (or a basket of our pastries at brunch) while you peruse the menu and take in the revolving view of this beautiful city. We’re proud to play a small role in such an iconic location.

And lastly, while you’re enjoying your meal don’t forget that only the interior rotates, not the external structure. If you set your drink on the window ledge, it’ll slowly drift away from you. More than a few enterprising and frugal drinkers have enjoyed their neighbors fine scotch, or their cocktail; one after the next, helpless to resist as they just kept appearing on the window ledge next to their table.

Visit this link for a long list of Space Needle fun facts.

Walnut Street Coffee is a perfect destination, whether you’re a local or looking for a little weekend adventure. Downtown Edmonds is a charming spot. The baristas are friendly and efficient and they make beautiful coffee. ~ Leslie 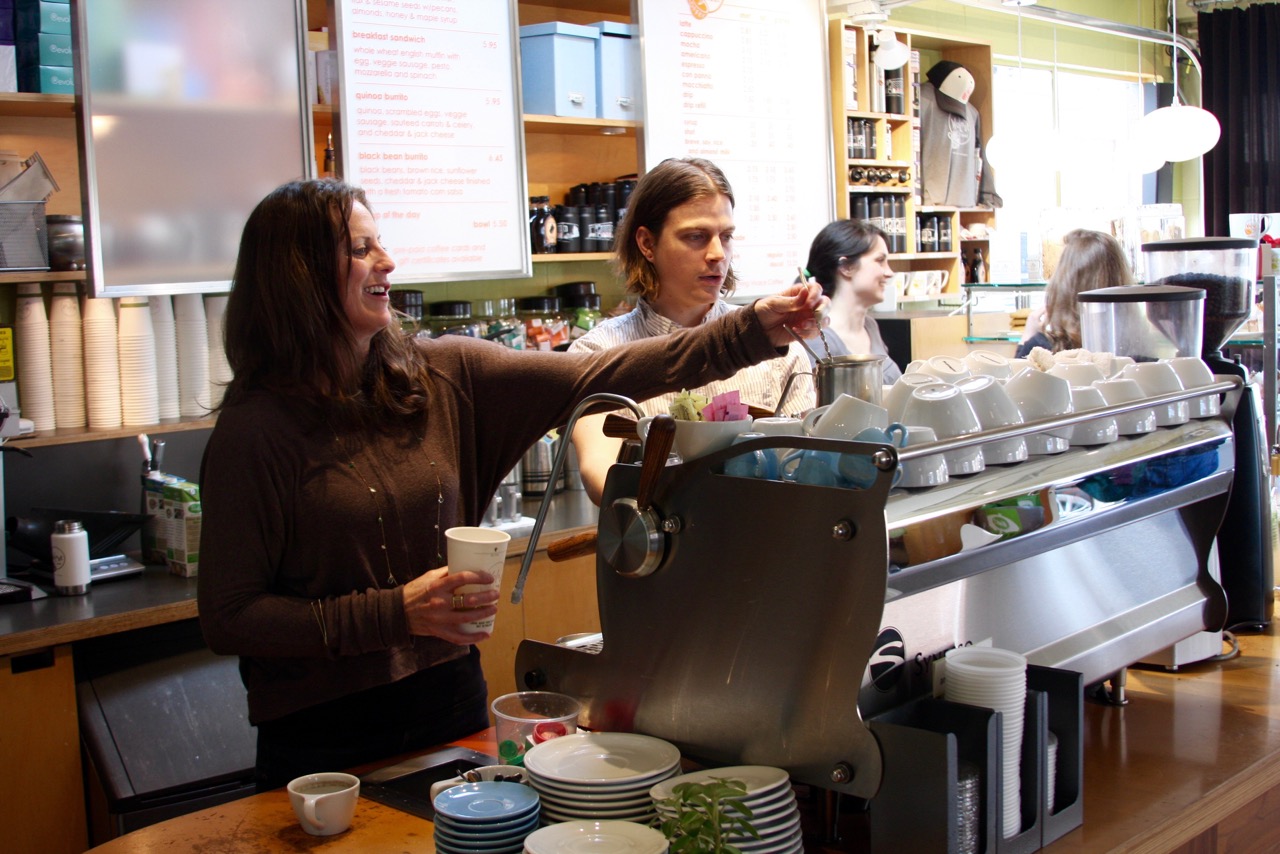 A headline in the recent issue of the Edmonds Beacon declares “Edmonds is no longer ‘Deadmonds.” With a growing population and an invigorated downtown, Edmonds is on the rise. Pam Stuller, the founder and owner of local favorite Walnut Street Coffee, is just the kind of entrepreneur that has helped make downtown Edmonds the vibrant place it is today.

When she found the space for her cafe in 2006, Walnut Street was pretty quiet. She and her husband, who live in nearby Richmond Beach, were riding their bikes around town and encountered a funky cinderblock building that had originally been built as a boat engine repair shop. Its defining feature was a roll-up garage door. A dream location; downtown, but enough off the beaten track to be the place locals would seek out away from the ferry and tourist crowd. One problem: a flower shop occupied the space. So she sent the letter to the landlord and six months later he called.

“People thought I was a crazy to take the space,” Pam said. 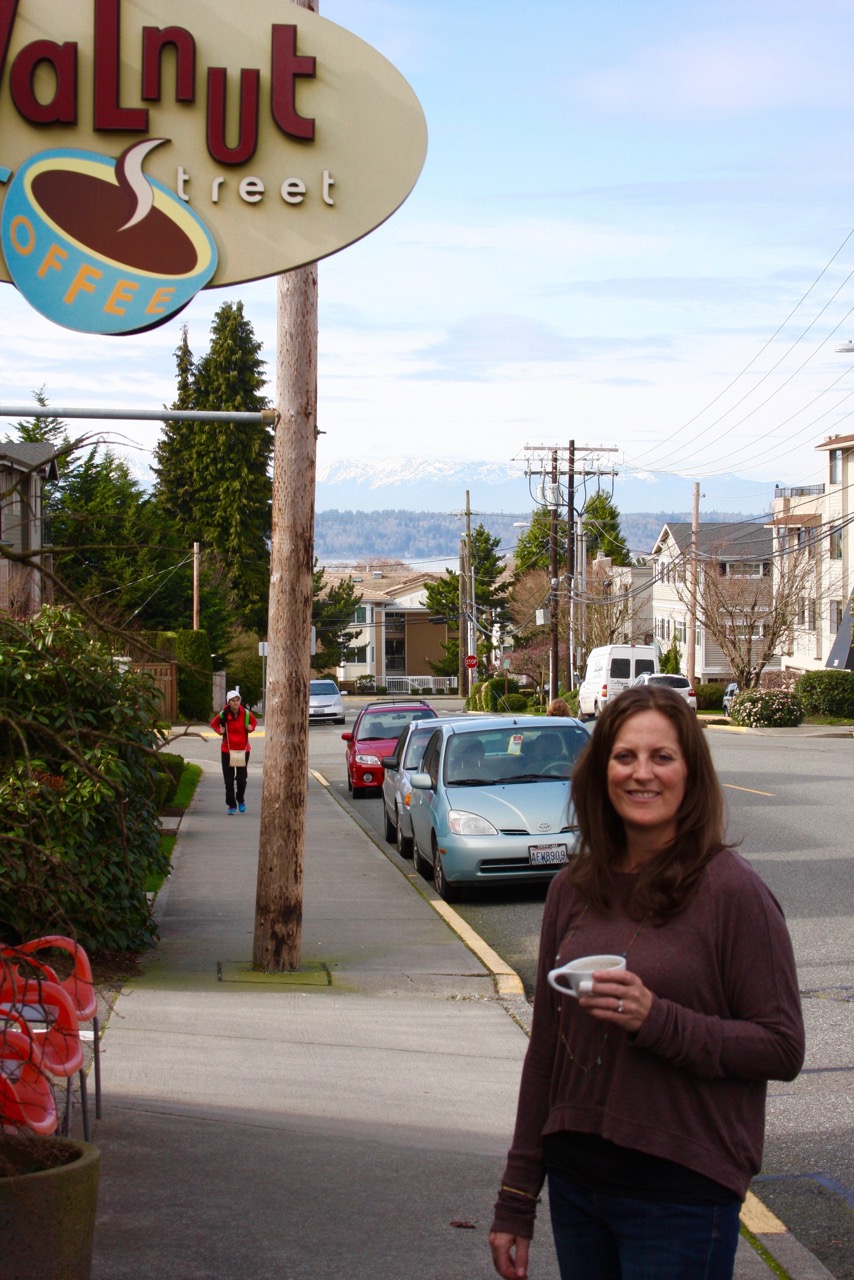 Out of college Pam didn’t imagine herself running a busy coffee shop. For ten years she worked in human resources. In 2002, a friend, Michael Prins was opening the first Herkimer Coffee on Phinney Ridge. She was working for Nature Conservancy, an organization she loved. But she was restless.

“If you can’t love your job and you’re working at an amazing organization what do you do? I felt like I’d already done everything I could to love what I do and it wasn’t working.”

So she left her job to help Michael get Herkimer Coffee up and running, focusing on the things she had experience doing, such as hiring a staff. A year and a half later she found herself still working there as a barista.

“It was the most fun, most rewarding, most enriching work experience I’d ever had. I loved it. I’d always loved cafes and cafe culture but I’d always been intimidated by the art of coffee. That was where I got to learn the craft and the trade. I knew then this was what I wanted to do. In coffee, you get to know people in such a different way. Most people are pretty routine about their coffee. You have this two-minute touch. Over time you pick up all the little intimate details—a kid is sick, news of a vacation, job changes—and you build a meaningful personal relationship. It’s pretty amazing.”

That led her to Edmonds and Walnut Street Coffee. She and her husband did most of the buildout themselves.

“My goal was to do one thing and to do it really well and to keep focused on what brings me joy. I figured that if I was happy to come here every day, the customers would follow.”

They did, but it took a lot of work. For the first two years, Pam worked seven days a week.

“The business almost ate me alive. Around year three I began adding enough staff that I could have a couple of days off a week.”

Keeping things simple has been key to her success.

“My passion and my love is espresso. But I don’t have experience making pastries. I’ve worked in restaurants and I know how much goes into food service. I wanted to keep things as simple and focused as possible.”

Initially, bakery options were few, but as Edmonds has grown so have options. 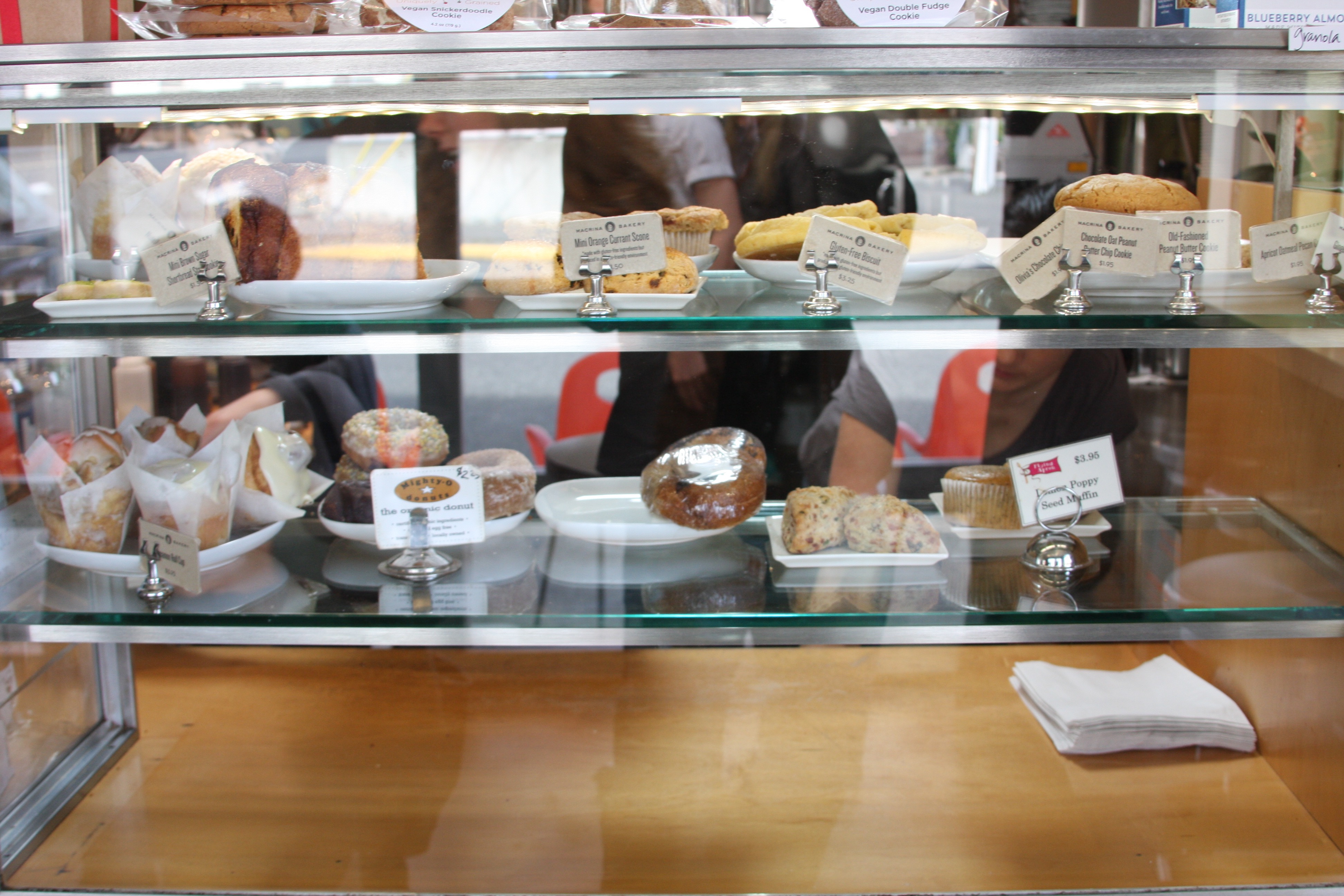 “I’m so thrilled to have Macrina. Edmonds is enough off the beaten track that delivery
options are few. You’re not on your way to anywhere when you come to Edmonds. When Macrina started delivering here, I was thrilled. The caliber and consistency of the baked goods are first-rate. Our customers love them.”

Approaching her ten-year anniversary, Pam is lucky to have two baristas who have been with her for over eight years. That’s exceptional in a high-turnover industry where the average barista stays at a job for one year. With her background in human resources maybe it should come as no surprise.

“I have a pretty amazing benefits package, especially for this kind of business. I have a retirement plan, profit sharing, health care, paid time off, holiday pay.”

She attributes much of the success of her business to her employees.

“I never underestimate the value of my people. They’re instrumental in maintaining and in continuing to build our business. Our business has grown every year since we opened, which includes the downturn.”

Occasionally she thinks about expanding, but worries she’d wind up doing more of the stuff she doesn’t love doing, like bookkeeping and back of the house work.

“I love the connection I have with my staff and my customers, and I worry that would get diluted. I live simply, and I’m happy the way things are. I hike, bike, cross-country ski, garden, walk my dog, I’m an avid reader, and I love to spend time with my family, friends, and my parents. I don’t want to lose any of that.”

Her love of the city recently led her to get involved in a business group called the Edmonds Downtown Alliance. She served a stint as president last year.

“That was rewarding, developing deeper relationships with the other merchants and finding ways to take what is so great about this town and amplify that so everybody does better.” 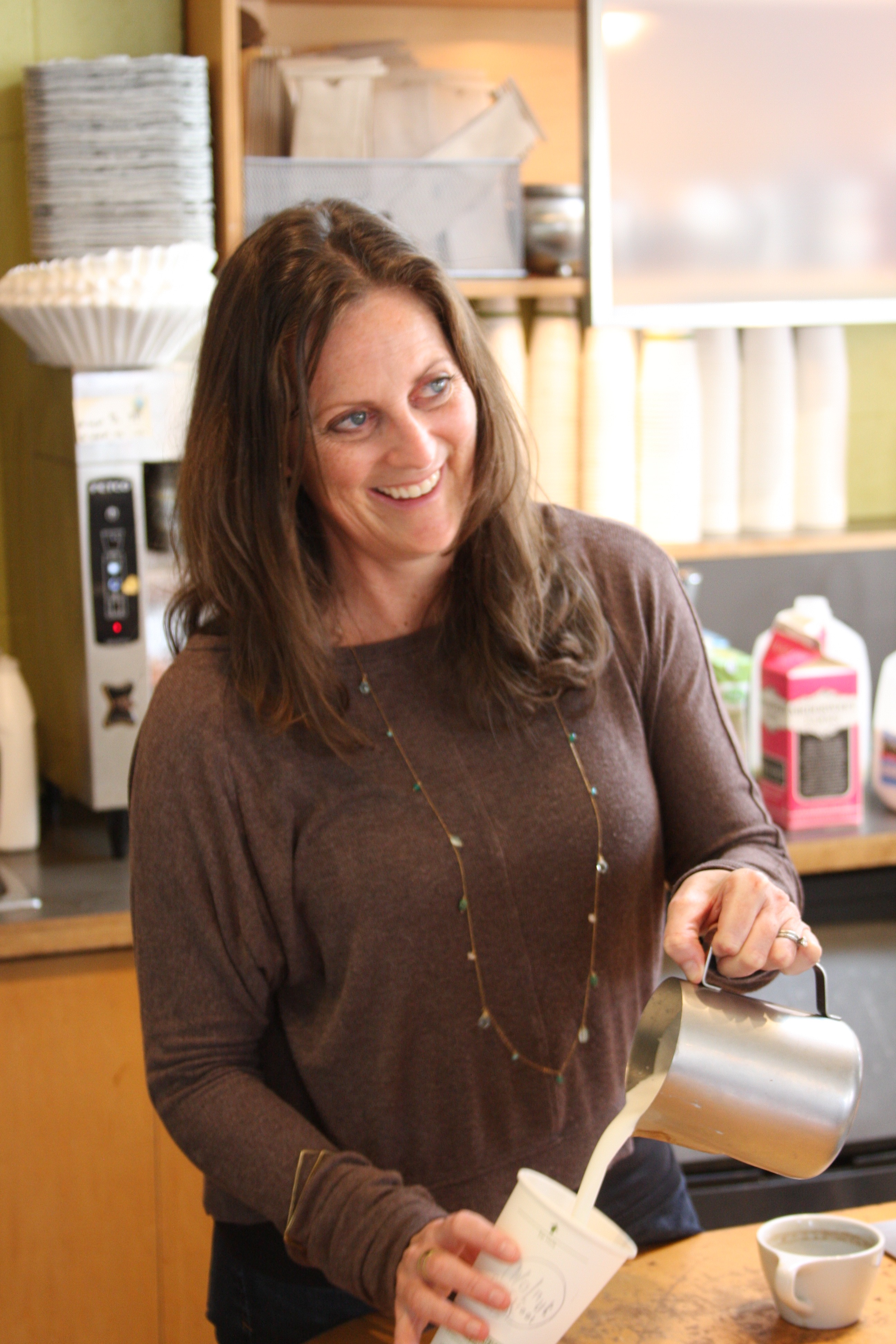 If you don’t already spend time in the seaside town of Edmonds, it’s time to make a trip. There are a couple of breweries, a distillery, a movie theater, lots of shopping, a bookstore, tasty restaurants. Most shops are small and owner-operated.

“You wouldn’t have to leave Edmonds if you didn’t want to. We kind of have it all in this little pocket, and it’s so scenic. It’s very Mayberryish in a way, but it also has an authenticity to it that I really enjoy.”

Start with a caffe latte and a treat from Walnut Street Coffee and take a stroll down 5th Avenue towards Main Street and you’ll discover that “Deadmonds” no longer exists.