Many of the best things in life are unplanned. My chickens, for instance, came along like that, and they have been a most pleasant surprise. 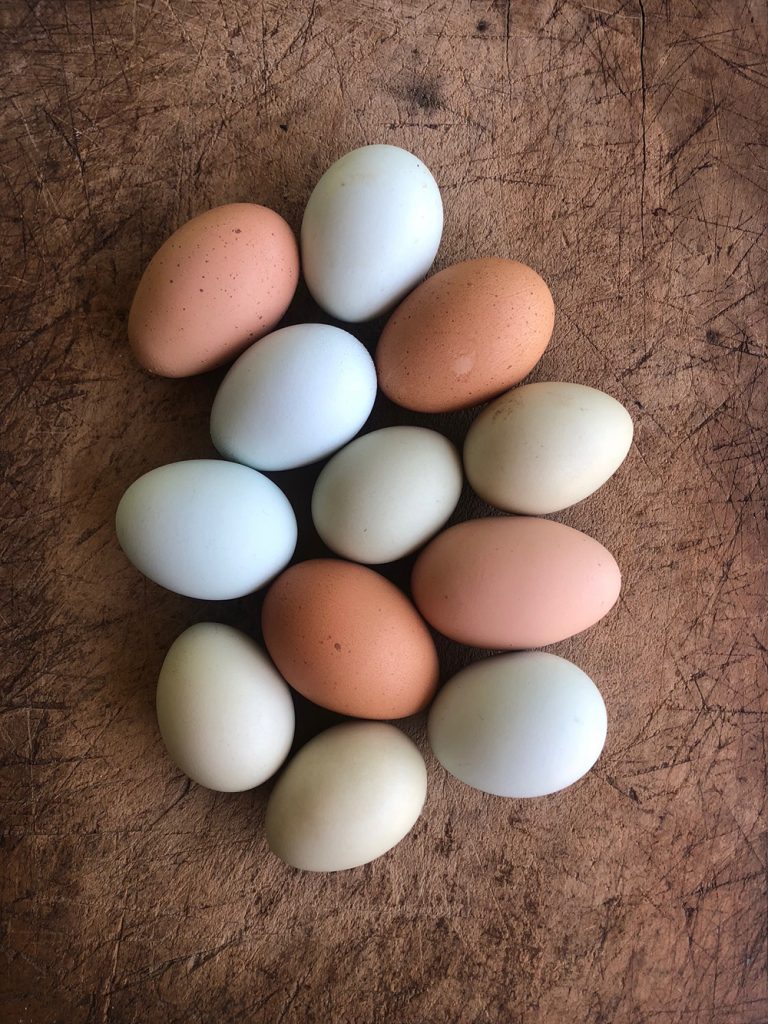 It all started with a donation. The Lake Union Crew Outreach Foundation does fabulous work, so when they asked me to donate food for their fundraiser, I couldn’t say no. Dropping off the meal, I saw a beautiful chicken coop for auction. Turns out the Lake Union Crew’s founder, Rome Ventura, had built the chicken coop. Seeing my interest, she offered to make one for me. She even hand-delivered it to my Seattle home.

By the spring of 2012, I had moved to my farmhouse on Vashon Island where my daughter, Olivia, got excited about raising chickens. Together we chose eight assorted chicks. We kept them inside for two months, nurturing those fuzzy yellow cuties. We named them and watched over them, somewhat obsessively. As they grew, so did our interest in getting them outside—who knew they’d become so pungent! Finally, we were ready to break in Rome Ventura’s handmade coop.

I placed the coop between four hazelnut trees to provide shelter from extreme sun. I also hoped it would provide some cover from eagles, a fearsome predator on Vashon. I built an 8-by-12-foot covered run for them so they didn’t have to stay “cooped” up all the time. This seemed like lots of space—until they got even bigger. 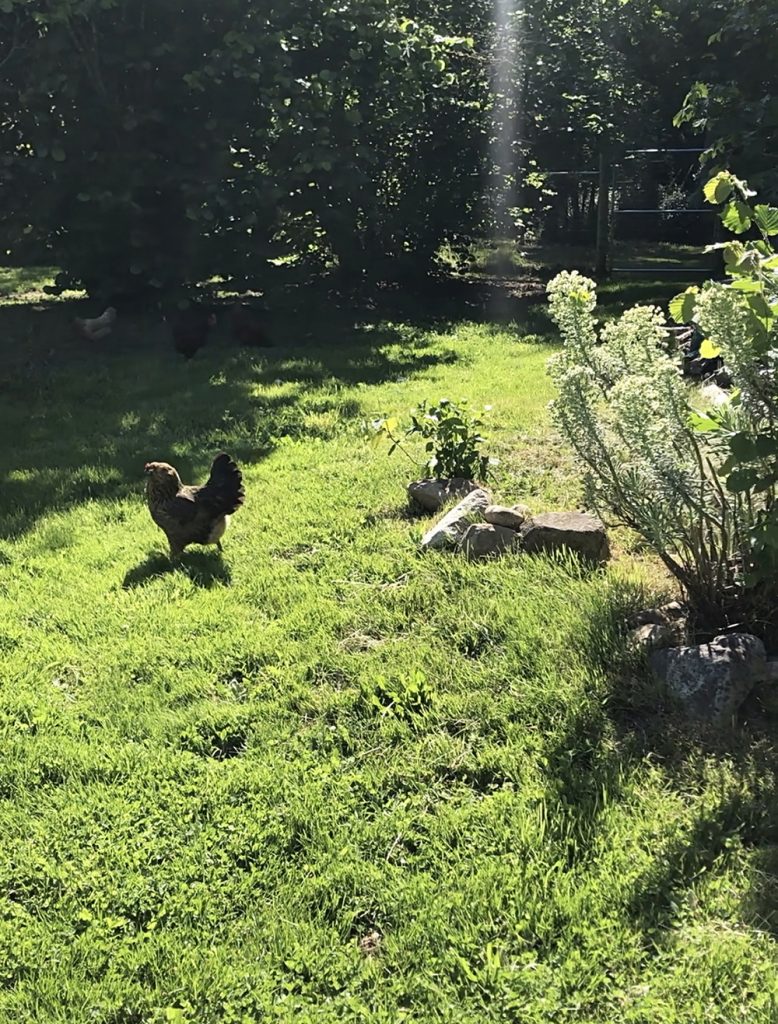 My two dogs weren’t quite sure what to make of the chickens at first. There was a bit of a stand-off, but after eight months everyone seemed to respect each other. I started letting “the girls” roam the property. That was a happy day in the life of a proud chicken mom. They roamed the farm finding bugs, grass and weeds to eat.

Then tragedy struck—raccoons scaled one of the hazelnut trees and carried seven of my chickens away to feed their young. I was heartbroken.

Fighting off thoughts of being unworthy, I moved the coop to a better location. My two small dogs, all bark and no bite, took on guardian roles. With loud barks and a quick sprint, they now chase away any raccoon or cat that wanders onto the farm. The hawks and eagles have also seemed to take note.

Over the last six years, I have gone from the original eight chickens, down to one, added three, back to two, added four, and now I am very happy with the six that I’ve had for the past two years. I have two Rhode Island Reds (brown eggs) and four variously colored Araucana (olive green to baby-blue eggs) all sporting that famous feathery beard. The oldest is Dulce, the queen, who was from the first batch. Introducing new chickens is quite a process, and it has taken a year for this team to blend. 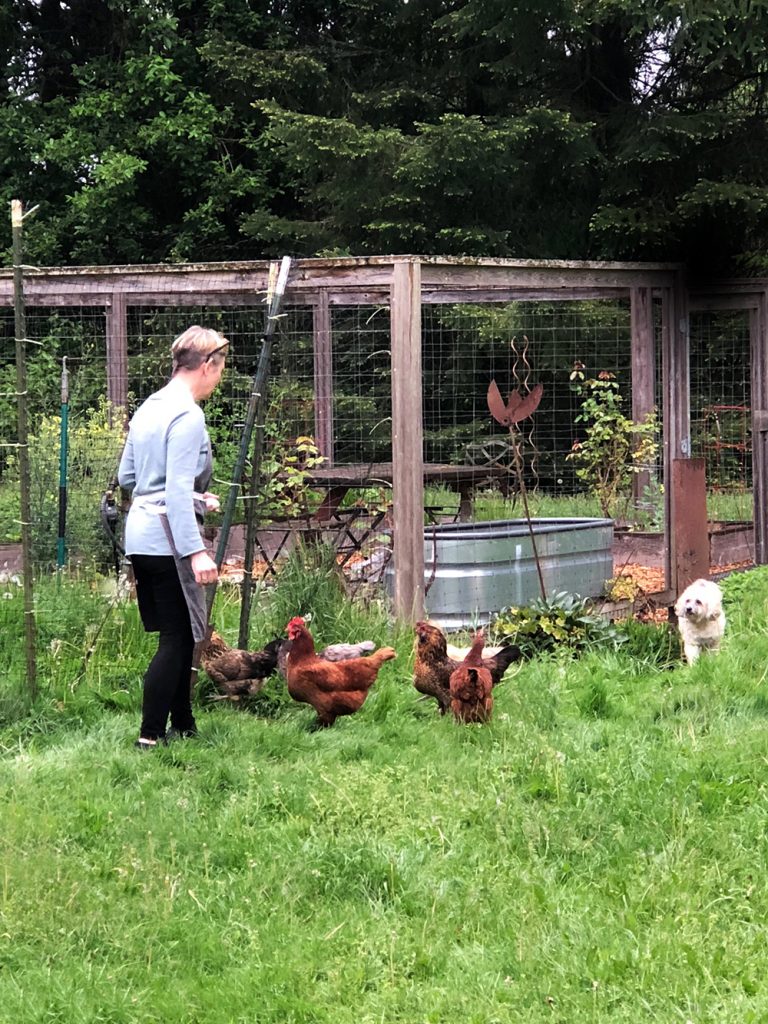 The chickens leave the coop around 7:30 a.m. to see what the night rain or morning dew has brought to the surface for their dining pleasure. They roam the whole farm, traveling in a tribe. They don’t eat my flowers, but they love my veggie starts so I had to fence the vegetable garden. Sometimes they fly over six feet up to the fence post and drop in!

My chickens are well fed, no surprise there—organic grain, leftover Macrina bread and vegetable scraps are their main diet. In exchange, they produce 3 to 6 eggs a day as a group. The eggs are richer in taste than a typical supermarket egg, with creamy, bright orange yolks. You notice the difference right away when eating them cooked plainly or baking with them. Aioli’s get a brilliant color from the bright yolks, lemon butter cakes and vanilla custards take on a golden hue, everything is more delicious with fresh eggs. 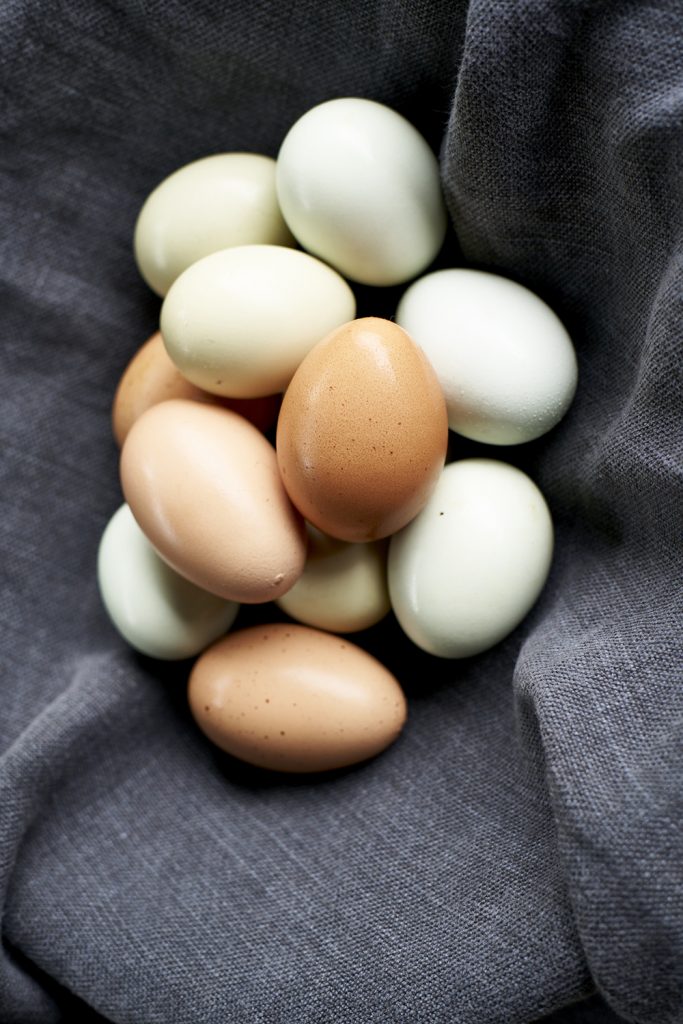 My girls join any outdoor dinner gathering. You can’t pick them up, but two will let you pet them. They cluck, coo, trill and peep as though carrying on a lively conversation. As the light diminishes, they make their way back to the coop, and I close them in to keep them safe.

I love my girls! 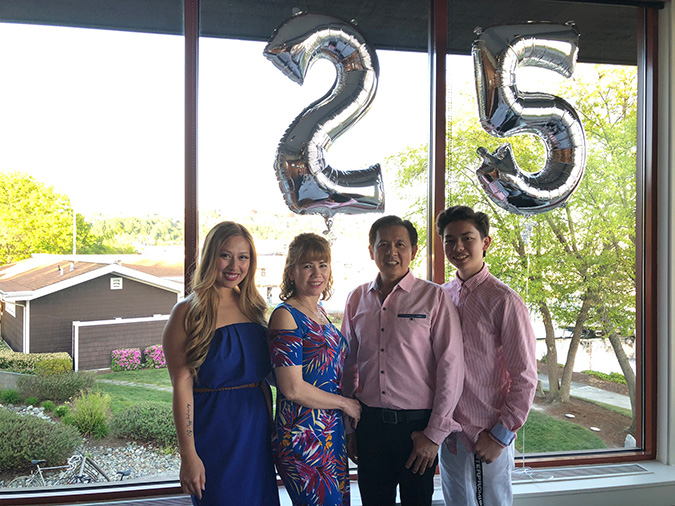 Macrina’s Head Baker, Phuong Hoang Bui, started working at Macrina in 1994. To celebrate his 25th anniversary we gathered with him and his family at Palisade Restaurant to share our gratitude for everything he has done for Macrina and the way he brightens the workplace with smiles and his cheerful heart. 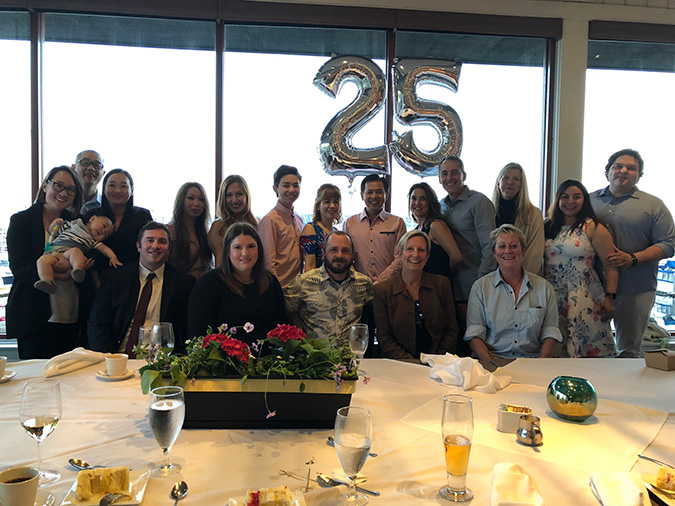 “The best part of the heartwarming dinner was Phuong sharing his fond memories of Macrina,” says Jane Cho, Production Manager. “Behind his kind, respectful mannerisms, he is a comedian and loves to laugh and tell a good story. I am grateful to have had the opportunity to work with Phuong for so many years and to be inspired by someone with such integrity in everything he does.” 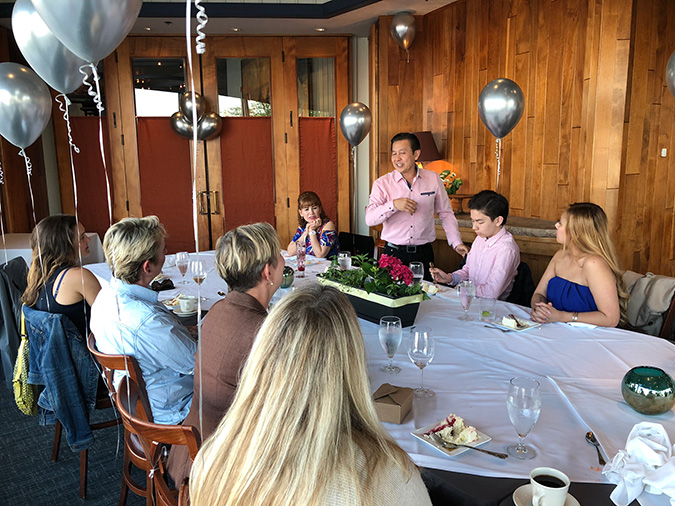 To learn more about Phuong’s amazing journey from Vietnam to Macrina read this blog that Leslie wrote about Phuong.

Throughout my new book, More from Macrina, interspersed among the recipes and beautiful photography, are stories about the people and partnerships that make the Macrina community.

Phuong Hoang Bui has worked at Macrina for 18 years and as much as anyone, he embodies the spirit of the Macrina community in a way that makes me so proud to have him as a colleague.  I first met Phuong through the International Rescue Committee, where he had been eagerly seeking employment.  At our first meeting, Phuong conveyed a deep desire to work and to learn – I hired him as a dishwasher on the spot. This was in 1994 – just after Macrina first opened. 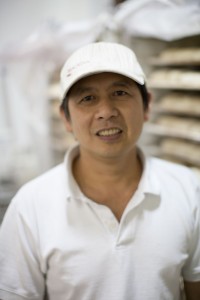 While he worked as a dishwasher, Phuong would always make himself available to help with food prep, to help shape bread, and to watch the bakers load the ovens – constantly seeking opportunities to learn more so that he could grow professionally while supporting Macrina’s growth.

18 years later Phuong manages our entire wholesale production team – fifty employees in all, diverse in age, ethnicity and experience – and Phuong takes great care to help them all develop the skills to succeed in their work, and for many of them, to adapt to a new life in Seattle.

Before starting at Macrina, Phuong had been trying to get to America from his native Vietnam for some time.  His first attempt was as a boat refugee when he was captured and imprisoned for two years.  When he was released Phuong received help and support from friends and family, which led to his arrival and new life in the United States.

Today, everything Phuong does through his work at Macrina demonstrates his gratitude for the help and support he has received. Phuong works with his team to help them develop professionally and embrace new opportunities, just as he did (and continues to do).  Phuong’s desire to repay the kindness he was shown when he first arrived here reflects so much of the culture here at Macrina, and just as Phuong is grateful for the life he has here, I am grateful for the chance to have him be a part of our daily life at Macrina.

Learn more about Phuong and his amazing journey in More from Macrina.

Sign up for our recipe of the month newsletter to get delicious recipes delivered straight to your inbox! 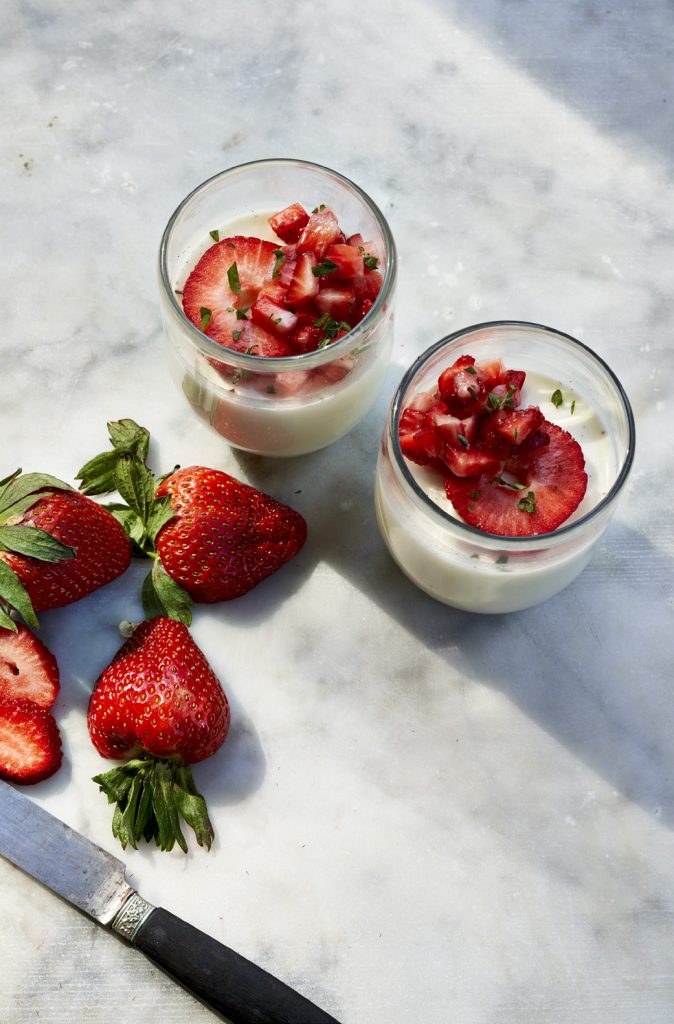 This recipe is in honor of Gina DePalma, the acclaimed pastry chef from Babbo restaurant in NYC. Her book, Dolce Italiano: Desserts from the Babbo Kitchen, inspires a reverence for simple recipes. Too often chefs over complicate dishes to make them more worthy. Sometimes less is more, a philosophy central to much of Italian cuisine. This recipe embraces straightforward preparations and quality ingredients. Good cream will really stand out, for panna cotta is one of the world’s most delightful versions of cooked cream. Sweet Washington strawberries and a Macrina Walnut Anise Wafer are perfect complements to this eggless custard.

Place the ricotta and 1/2 cup of the milk in a medium bowl and whisk to dissolve the lumps. Add the sugar, gelatin and heavy cream to a medium saucepan. Cut vanilla bean lengthwise, and scrape the seeds out with a paring knife. Add the seeds and bean to the heavy cream. While whisking constantly, warm mixture just to the boiling point, then turn off the heat. Gradually pour the heavy cream mixture into the ricotta mixture and whisk to combine well. Remove the vanilla bean and strain the mixture through a fine cheesecloth or mesh strainer. Add the remaining 1/2 cup of milk and mix to combine. Divide the mixture between 6 sorbet glasses or stemless wine glasses. Place in the refrigerator for 4 hours to set.

Finely dice 9 of the strawberries and place in a medium bowl. Cover with the sugar and sprinkle in the sherry vinegar. Mix well and let sit for 1 hour before serving. Thinly slice the remaining strawberry into 6 rounds. Top each panna cotta with a strawberry round, a spoonful of sweetened diced strawberries and a sprinkle of oregano. Serve with a wafer cookie and enjoy!