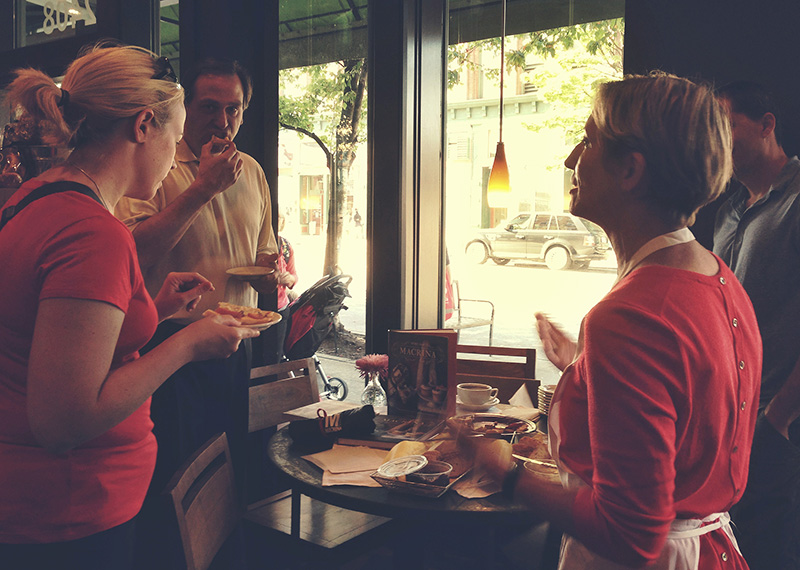 Leslie connects with customers during our Eat Real Food event on Wednesday, August 28.

Leslie Mackie first opened the Belltown café in 1993 with a 10-year vision for her bakery. With a tremendous amount of ambition, dedication and community support, Leslie’s dream quickly blossomed into reality.

“The first 10 [years] were extremely busy (lucky us!) and hectic, as we were always challenging ourselves to do our best and tweak to improve our systems,” she says.

This week we’re celebrating 20 years of connecting with the community through food by introducing our Raisin Pumpernickel Loaf. 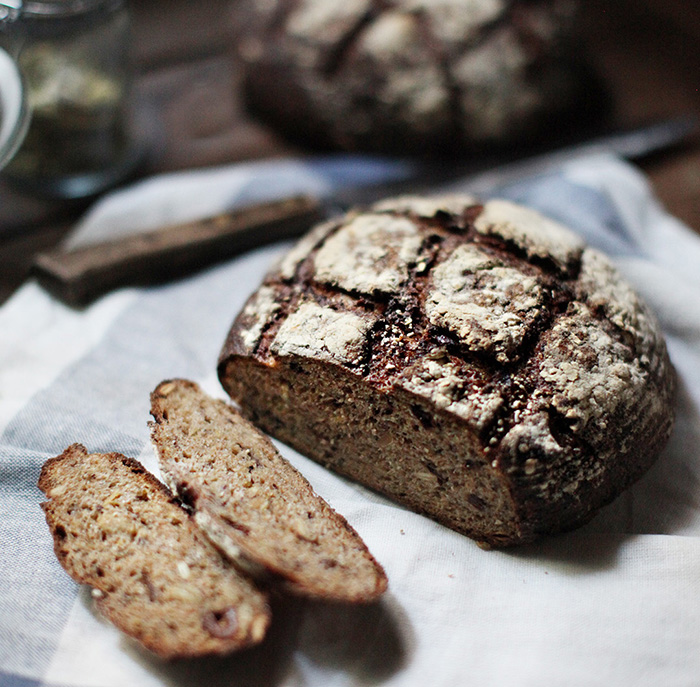 “The Raisin Pumpernickel is a bread that I have wanted to do for a long time,” says Leslie. “I’ve wanted to use a local wheat and believe in the additional nutritional qualities of whole-milled flour.”

Featuring Williams Brothers Hard Red Winter whole grain flour, coarse rye flour, cornmeal, raisins, and pumpkin seeds, this bread is the perfect balance of sweet and earthy. Leslie incorporates some Macrina Casera starter in the recipe to connect it to the heart of our bakery.

Because of its starter, caramelized crust and dense crumb, our Raisin Pumpernickel has an exceptional shelf life of four days. Leslie recommends serving it thinly sliced with a bit of unsalted butter, mild triple-crème cheese or soft Brie.

Easily enjoyed year-around, we’re making this bread a menu staple. Find it at any of our cafés and take some of the celebration home with you.

“It has been a wonderful anniversary week,” adds Leslie. “I am very proud of all the staff and management team that keep this dream alive!” 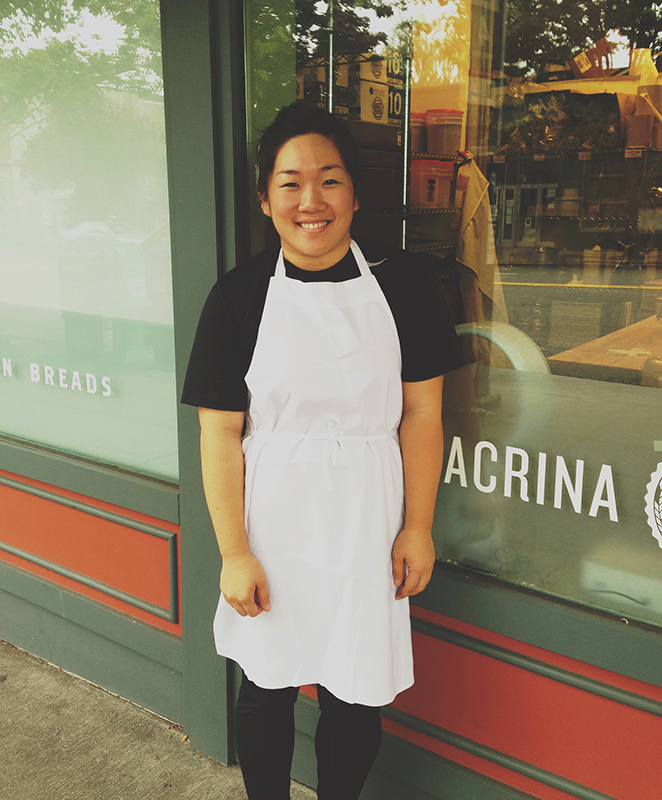 Mi Kim found her path early on. Growing up baking treats for her friends and helping out in her parents’ restaurant, Mi has always felt most comfortable in the kitchen. Now she helps manage ours as head pastry chef. Today Mi gives us a glimpse into her journey over the last five years and shares her best advice for aspiring pastry chefs.

When did you know you wanted to work with pastry?

In school my best friend and I used to always bake, and my parents owned a restaurant, so I was always in the kitchen. Junior year of high school, I realized that I couldn’t sit in a classroom and I loved food, so I figured why not try baking. So, I went to school at Western Culinary Institute [now Le Cordon Bleu School for Culinary Arts]. My mentor met Leslie [Mackie] and she told her about me and I got hired on as an intern.

How did you work your way up to head pastry chef?

I was the [pastry] lead at McGraw for a while and then [Production Manager] Jane [Cho] started doing wedding cakes at SODO. Jane was working constantly, like 16-hour days, so when I’d have time at McGraw I would call her to see if she needed help. At first, I helped her out with sheet cakes and then started taking on more and more until we decided it was time for me to take over. It was a good way to learn, because it wasn’t overwhelming and I got to build my skills slowly.

I like learning and getting to a certain point where I’m comfortable and then taking it on on my own. That’s something that keeps me going. Getting into the pastry chef position and taking on wedding cakes full on were big accomplishments for me.

What do you love most about being a pastry chef?

I’ve always really enjoyed making specialty cakes, more so even than wedding cakes. Say someone comes in with a picture or an idea of something I’ve never done before, I love jumping in and seeing how it turns out. I just love that creative aspect.

I still love making croissant dough and doing the turns by hand. I like the feel of the dough and the smell of yeast. I really like brioche products too. Forming the Ham & Cheese Brioche is still so satisfying.

What’s your favorite thing to eat at Macrina?

I love upside down cakes for their sugary, caramelized flavor. I really like the Morning Glory Muffin, because it has the [turbinado sugar] on top. It’s so good. The Rick’s [Chocolate Apricot Espresso] Cookie is one of my favorites. I’d never thought of putting apricots in things, but it’s so good.

What advice would you give to an aspiring pastry chef?

Flexibility is something I hold highly in people. It branches into so many things. I think to be successful you need flexibility to handle certain situations. Problem-solving skills and good attitudes are also things I look for when I’m hiring people. Having schooling is one thing, but if you have that drive and attitude and you don’t have schooling, I almost value that more. We’re so big on morale here and everyone having a great attitude and wanting to be here. That’s what leads to success. You have to love something in order to get good at it, no matter where you start. 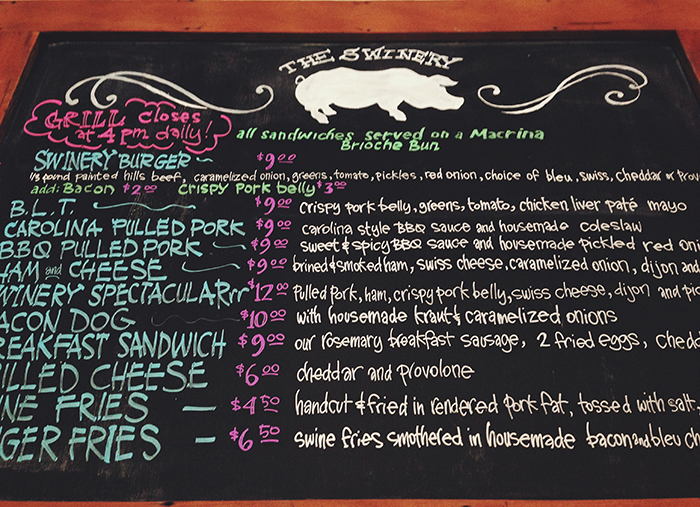 “This is basically a Carlton Farms/Macrina/Swinery-cooked sandwich,” James Dillon grins as he hands over a plate of Carolina-style pulled pork and tangy slaw hugging the edges of its buttery bun.

James fell into ownership of The Swinery when its founder Gabriel Claycamp left abruptly in 2010. At the time, James was running a successful construction company while investing in the sustainable butcher shop. Despite The Swinery’s rocky start, business has been booming since the change in ownership.

“It’s been a tremendous uphill learning experience for me,” James explains of life in the food business. “I’m in a whole other universe. Fortunately for me, the product was always really good. All we had to do was basically understand what the costs were to run it and how to train a proper crew.”

According to James, the current crew is really into what they’re creating, which is evident upon entering The Swinery. Customers are greeted by silver steel pig and a jar of bacon-spiked caramels. A butcher case displaying a parade of locally-sourced meat leads to a blackboard menu of meaty sandwiches, all served on our toasted Brioche. At the back of the shop rests a fridge stocked with tubs of bacon chocolate chip cookie dough and farm-fresh eggs. 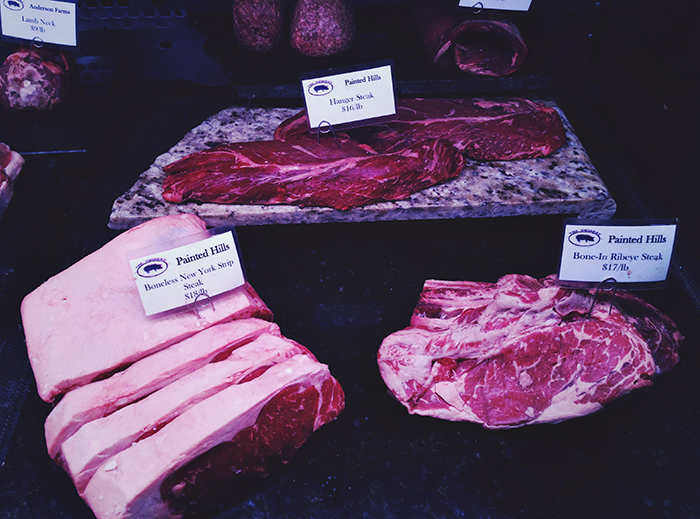 James and The Swinery team take pride in their sustainable meat business, roasting whole Carlton Farms pigs, shelling out Mad Hatcher eggs by the dozen, and teaming up with Painted Hills Natural Beef for their prized pig – or, shall we say cash cow – the Swinery Burger. And, lest you forget the name of the place, these guys will gladly top any of their sandwiches with bacon or pork belly, naturally.

Don’t believe him? Order the Swinery Spectacularrr, a towering feast that puts James’ theory and the crew’s skill to the test.

With meat-centric diets trending and more people interested in where their food comes from, The Swinery has carved out a nice piece of the market. Their courtyard, also known as the Inner Sanctum of the Temple of Porcine Love, sees a rotating ensemble of meat enthusiasts, from the regulars who can’t resist the Spectaclularrr’s siren song to the Paleo crowd who just wants 10 pieces of crispy, smoked pork belly.

Bring a healthy appetite, your stretchiest pants, and some time to take it all in.

“You gotta be careful,” James says, eying our empty plates. “I’m going to put up a sign that says, ‘The Home of Slow Eating.’” 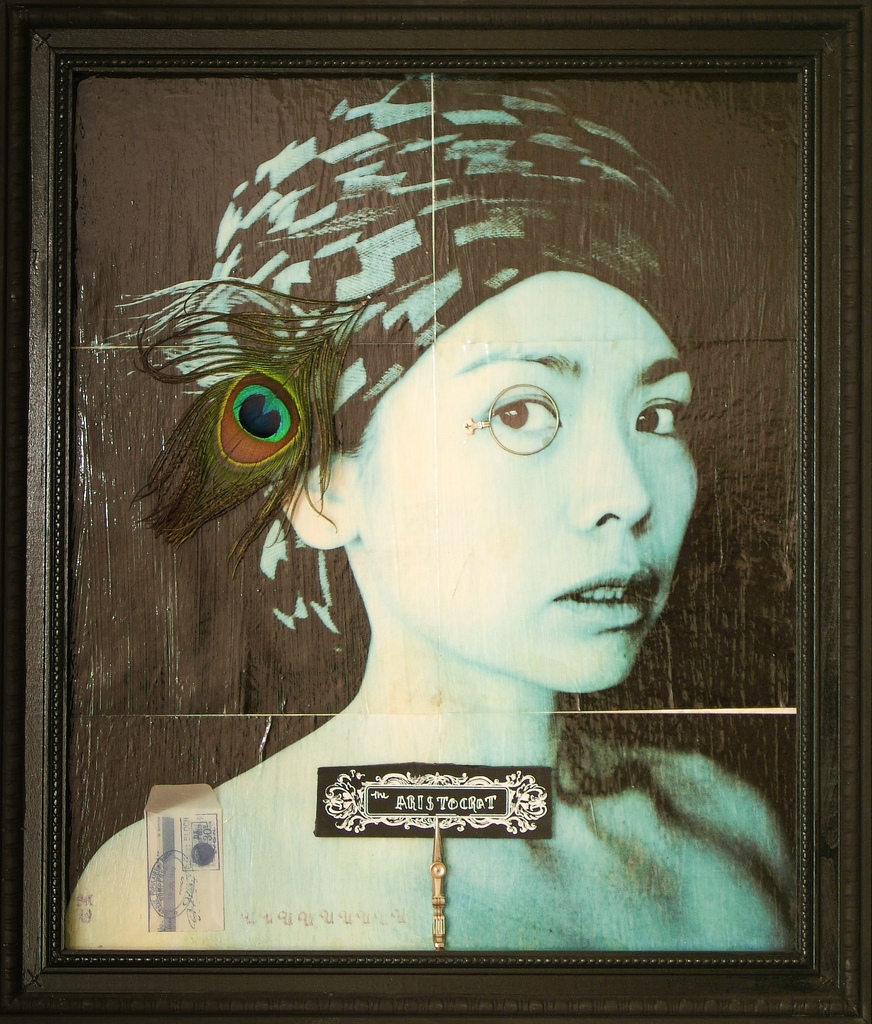 Although, Mickey Williams has always fancied himself an artist, it wasn’t until he started taking portraits that he knew he had found his medium. Mickey has since fine-tuned his craft into something much more than photography. His work is where graphics and fine art meet, creating an intriguing blend.

“It sounds cliché, but I see things everywhere,” Mickey explains of his inspiration. “The ideas will come to me at times while I am talking to somebody and they are expressing their own style or mannerisms. Sometimes it’s just that I came across a prop that I am drawn too and then I start thinking about the people that could work with it.”

From there, he sets up the scene, stockpiling props to build his vision along the way. Once he has the shot, he pulls the image apart and laces it back together, adding layers of lacquer – sometimes even objects – bringing the image to life.

Mickey’s cryptic portraits and spellbinding, documentary-style photographs display eerily intimate moments. Adorned subjects stare out from their frames as if held there in captivity. Sometimes he uses professional models, but for the most part, Mickey prefers photographing “everyday people.”

Well, there are a handful of characters he would love to place into one of his illuminated worlds: Isabella Rossellini for her amazing beauty, Mick Jagger’s early years, and Frida Kahlo, an inspiration. Mickey wistfully talks about the pull to photograph his children and the heartbreak of seeing time pass so quickly by doing so; a feeling that conceivably gets funneled into his work.

After a hiatus from the camera, Mickey is getting back into photography again. Upon a suggestion of a friend, he is showing his work in our SODO café this month. And he is already dreaming up his next show.

“I am working on having a solo show that would be hung out in the woods in a Seattle park in late September. It would have all the typical aspects of a gallery show, with music and food, but be out under the stars. Could be amazing or a travesty, but that’s half the excitement.” 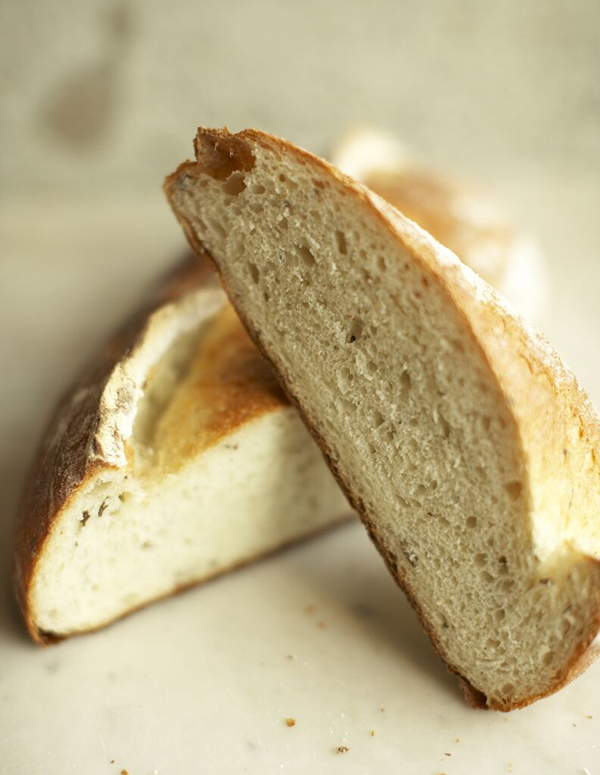 Every week about 15,000 pounds of Russet Norkotah potatoes arrive on our doorstep. From there, they are mashed (peels and all), mixed with unbleached flour, yeast, extra virgin olive oil, and sea salt, and then crafted into one of our biggest selling breads: Rustic Potato.

These spuds get their start as seedlings under the watchful care of Mattawa’s Wahluke Produce, nestled in the arid Columbia basin. Wahluke Produce is owned by the Christensen family, who has farmed the area for three generations. Even though it is a fairly new potato variety, the easily adaptable Russet Norkotah is a staple on this farm. Light in texture and full of flavor, they are a baker’s dream for whipping up perfect potato bread.

Eventually these potatoes find themselves on your table in the form of a sliced loaf, lightly toasted, and slathered with sweet preserves; a basket of warm, soft rolls, passed among family; or perched on a party tray as petite sliders sandwiching your favorite fixings.

Here are Macrina, we believe that good things are even better when they are shared. And, our potato bread is a perfect example of the communal bond from farm to table.