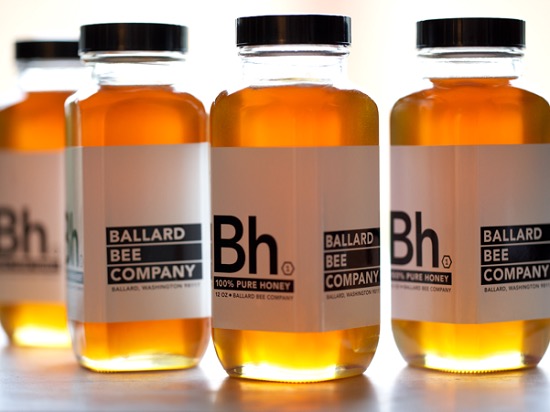 On my Vashon Island farm, I have plenty of space for my gardens and chickens. But the current trend in urban farming blurs the old line between city and country. Farming used to be something that took place outside of town. Nowadays, many Seattle homes have parking strip planter boxes overflowing with beans, zucchini, tomatoes, peppers, corn, and much more. Composting boxes overflow. Chickens cluck proudly in backyards, supermarket eggs are no match to their prize offerings. So it’s no surprise that urban bees should follow. That urban produce needs to be cross-pollinated somehow.

Corky Luster started Ballard Bee Company out of his Ballard garage. He’s the Steve Jobs of local honey, the godfather of the urban hive. Turns out it takes more than just plonking a couple of hives in your yard. You need to know how to manage the colony. 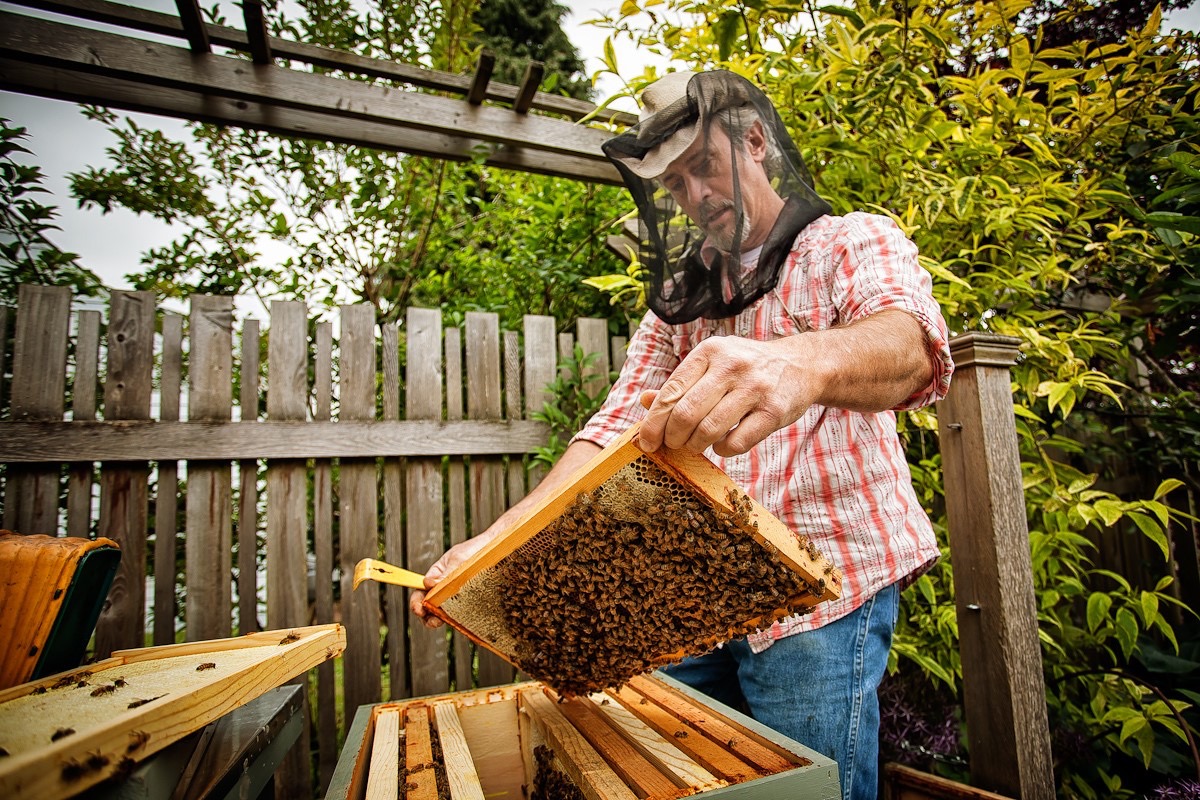 Corky’s love for beekeeping began in college when a German roommate started a couple of hives in their backyard. While working as a designer and contractor building homes in Seattle, he started raising bees in Ballard. City ordinance only allows up to four hives on lots less than 10,000 feet. So Corky began recruiting others to host hives. He manages them; the homeowner gets a dividend of honey and the knowledge that they’re helping our local ecosystem. The hive takes up little space, but its impact is large. Corky combats disease-and-mites by using integrated pest management principles and avoids harsh pesticides, such as acaricides, in his efforts to keep the hives healthy and happy. The city, surprisingly, turns out to be a great place to produce honey since urban trees and gardens tend to be free of industrial agricultural pesticides. With a surplus of fantastic honey, Corky bottled it and began to sell it through a few local stores in 2010.

Renee Erickson, chef of Ballard’s The Walrus and The Carpenter and Fremont’s The Whale Wins, has Corky manage hives for her restaurants. Corky’s cult status in the beekeeping world has also allowed him to partner with Seattle Tilth to teach classes on building and maintaining healthy hives.

At Macrina, I’ve always tried to carry a few locally produced items that complement our breads—it’s hard to find anything more local than Ballard Bee Company’s honey. The flavor is delicate and floral, with just a hint of lemon in the aftertaste. With Seattle’s explosion of urban farming, there are plenty of flowering trees, flowers, and gardens. Plus all those wild blackberries. So the bees do their important work, Corky’s careful attention keeps their hives healthy and we get to offer this beautiful honey. Everybody wins! 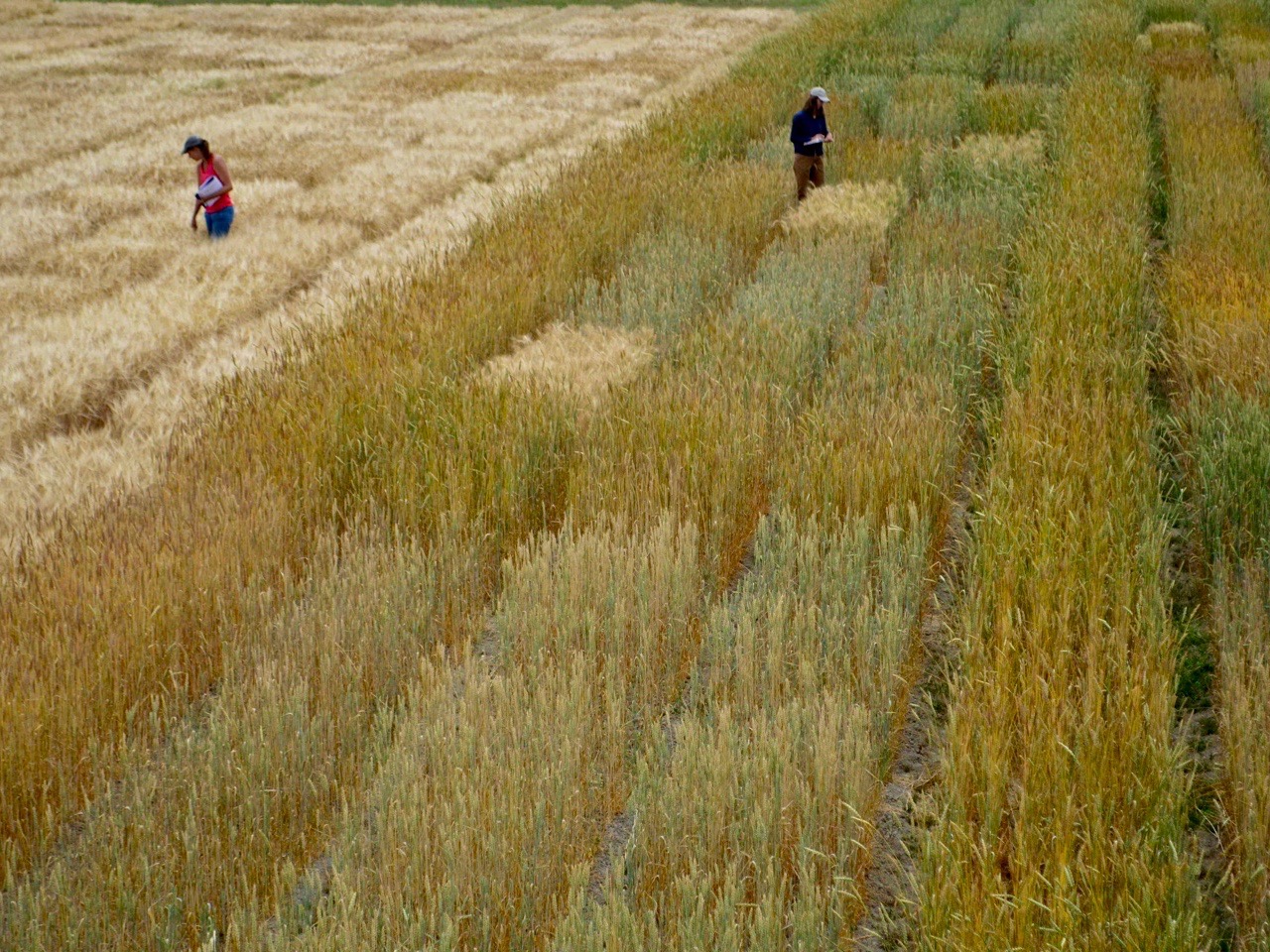 The flour most of us are familiar with—the inert, white powdery stuff from the supermarket with a long shelf life—is a very modern development in our long relationship with wheat, the most important food in history. Before industrial agriculture became dominant, milling was done at regional mills with diverse strains of wheat. The effort to create uniform flours that won’t spoil has taken much of the flavor and nutrition from our flour and the products made with it.

One of the national leaders in the effort to restore flavor and nutrition to available wheat is located just north of Seattle in the Skagit Valley. Dr. Steven Jones runs The Bread Lab, an extension of Washington State University. He is devoted to bringing grain agriculture back to our region. A hundred years ago, fields of grains filled the Skagit Valley, but as industrial wheat brought the price of the commodity down farmers shifted to more valuable crops. Recently though, farmers, using wheat as a rotation crop to break disease cycles and to restore vital elements to the soil have discovered, or rediscovered, that many varietals grow wonderfully there. This is where The Bread Lab comes in. Jones is a wheat breeder dedicated to making regional grain farming viable again. His lab develops vigorous wheat hybrids full in flavor and nutritional value that grow optimally in particular climates. 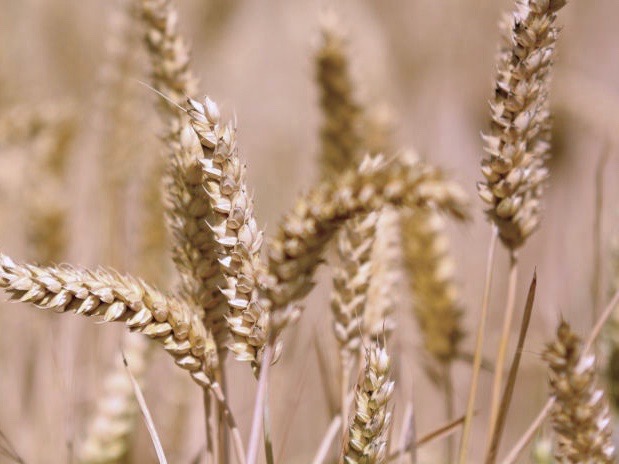 Over six years ago, I was invited to be part of The Bread Lab’s advisory board. Back then I had no idea how impactful it would be. At the time, I was happy with our flour and didn’t imagine I would be looking elsewhere. A few bakers I knew in Seattle were experimenting with milling their own flours. I was eager to learn more. The Bread Lab proved to be an excellent resource. It gave me the opportunity to test wheat from smaller growers. Jones and his team check it for strength and provide us with its falling number, which indicates the speed of fermentation. As you can imagine, our baking schedule is pretty tight. A dough moving unexpectedly slowly or quickly can really throw things off.

Using ingredients with the highest integrity has always been central to my mission at Macrina. In flours, flavor and high nutritional value are the two most important things I look for, along with consistency and a reliable supply. My earliest fascination was with whole grain milling. Most commercially produced flour is made only with the starchy endosperm of the grain. Both the nutrient-rich bran and flavorful wheat germ are discarded because the oils they contain will turn rancid in a few weeks. But the durability that commercial flour gains by discarding them comes at an enormous cost—the loss of flavor and nutrition.

This is why, years ago, I started using freshly milled whole grain flours from Fairhaven Mills. I admire the nutty and natural caramel flavor that comes from the milled whole grain flours. When I first started experimenting with this whole grained milled flour, I was hydrating a portion of the flour to soften the bran. This worked to some degree, but I was still not getting the rise I wanted, resulting in a dense texture. The Bread Lab provided me with many strategies. With their help and plenty of experimenting, I got the results I desired. On another occasion, we had a difficulty with a flour we were getting from Fairhaven Mills. They’d had to substitute a wheat from Montana rather the Walla Walla wheat we’d been using. I sent a sample to The Bread Lab. They tested it and determined that the wheat had a smaller falling number, which means the dough develops quickly. We reduced the mixing time and with lots of tweaking got consistent results. When you’re mixing hundreds of pounds of dough destined for someone’s table in a few hours and the dough isn’t behaving you can imagine the frenetic scene that results. 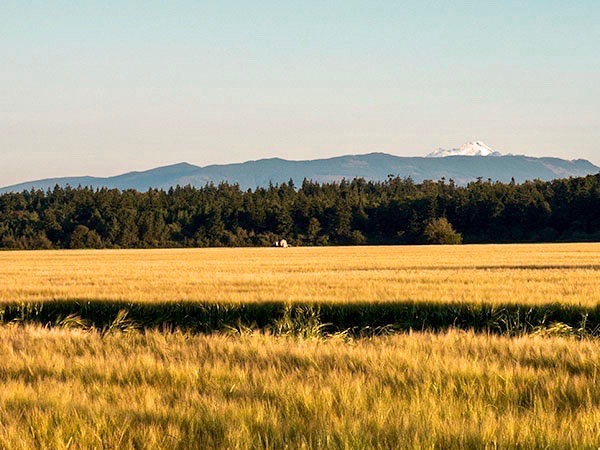 Every year The Bread Lab hosts an annual conference called Grain Gathering. Professional bakers, bread enthusiasts, brewers, farmers, and chefs from around the country descend on the Skagit Valley. Workshops, panel discussions, and demonstrations cover a range of wheat-centered topics (I’ve learned lots from these over the years). At the 2015 event, they held a bread tasting for a group of experienced bakers. We tasted seven breads, each made with a different locally grown wheat. For each loaf the recipe was essentially the same, with small adaptations made to create the best loaf with each flour. The varying tastes, textures, and the overall natural sweetness was a revelation. The flour made all the difference. The experience inspired my commitment to bringing more locally grown flours to the breads we make at Macrina.

One of the challenges The Bread Lab faces is that making local wheats prevalent takes more than introducing them to local bakers. Local grain economies that existed before the mass produced flours drove them out of business must be rebuilt. That includes persuading farmers to grow the grains, mills to grind them, stores to sell them and buyers to purchase them. Contributing to a healthy and sustainable local food economy is not just a good thing for Macrina to do, it’s a great thing for our bread. You just can’t beat the taste that freshly milled whole grain flours provide.

With the success The Bread Lab has experienced they’ve outgrown their small space and this summer will relocate to a 12,000-square-foot building. King Arthur Flour is partnering with them to add a full-scale mill and educational center. The state-of-the-art facility, and the passion and knowledge of Jones and his team, is a unique treasure. We are lucky to be so close to the innovation taking place in Skagit Valley, innovation with benefits that extend through the state and beyond.

In the introduction to my last video, I talked about the value of a larder stocked with the jams and sauces made with the surplus of fruits and vegetables from the summer harvest. The small investment of time spent cooking and preserving the best of summer allows you to enjoy its riches all year. And when you’re entertaining, a well-stocked larder makes it that much easier to kick out something spectacular or a quick and easy dinner during the work week.

Spring plant sales are a vice of mine. I imagine my garden overflowing with zucchini, snap peas, green beans, peppers, lettuce, and much more. Especially tomatoes. Given the unreliability and streakiness of hot summer weather in the Pacific Northwest, I plant lots of tomato varieties, never knowing which will thrive best. I plant sweet cherry tomatoes for fresh eating, Brandywine, Juliette, and Tiger Stripe for bruschetta and fresh sauces. Inevitably I wind up with baskets of lovely, ripe tomatoes far in excess of what my tomato-loving family can eat. What to do? Roasted tomato sauce. My baskets of surplus tomatoes go into the oven with olive oil and garlic to roast. I puree them with fresh basil before sealing them in jars and storing them in my larder.

In the seasons that follow, invariably those jars of summer goodness become the heart of flavorful pastas on busy nights. To me, a good roasted tomato sauce calls for garlic bread. Our new Stecca bread is ideal for this. Stecca, a soft “sweet” (meaning not sour) baguette, is made with our yeast-risen ciabatta dough. It has a light, golden crust and a well-aerated irregular crumb structure. In this video, I transform it into an excellent garlic and cheese-topped dipping bread, a great accompaniment to bucatini pasta with roasted tomato sauce. Together they make a simple, soul-satisfying meal that you can throw together in less than half an hour.