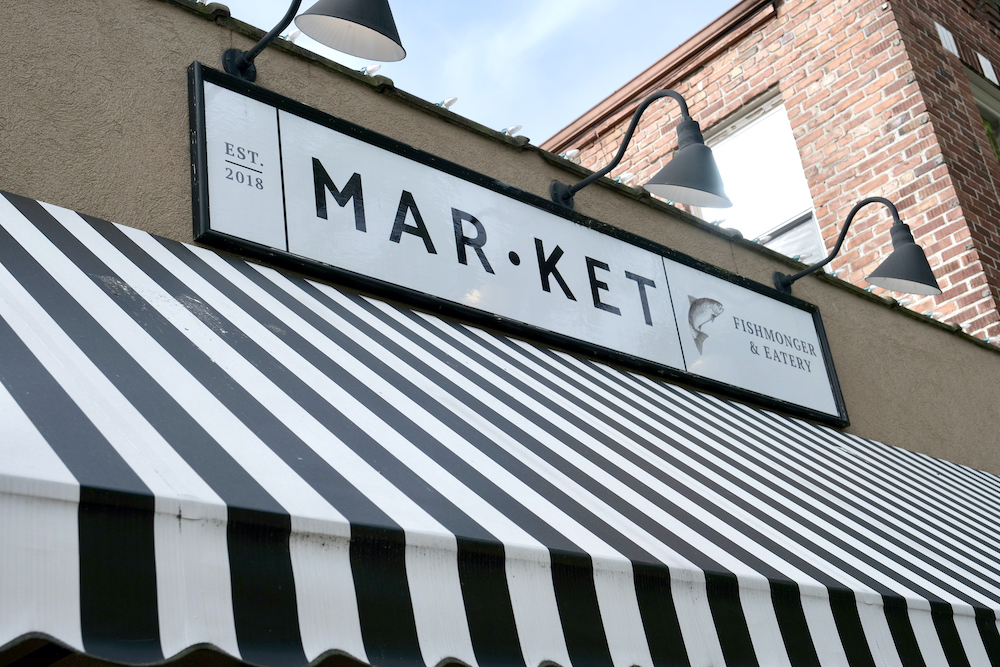 The Edmonds Fishmonger and Eatery just opened an outpost in the Seattle Art Museum.

Last October, amid the pandemic and the election swirl, Market, Edmond’s revered Fishmonger and Eatery, introduced their warm Lobster Roll (Connecticut Style). At $29 per sandwich, it seemed destined to be a niche item behind mainstays like their more modestly priced Fish & Chips, Market Fish Tacos, or Crab in a Bag. Then people began lining up—by the hundreds.

What’s maybe craziest about the sensation is that nearly a year later the craze hasn’t abated. The hole-in-the-wall fishmonger still sells hundreds of lobster and crab rolls every week.

Chef Hans Korompis, raised in Singapore and trained at several fine restaurants, including TanakaSan, a Tom Douglas restaurant, says, “We caught wind when we introduced the warm lobster roll. That’s when it got crazy.” 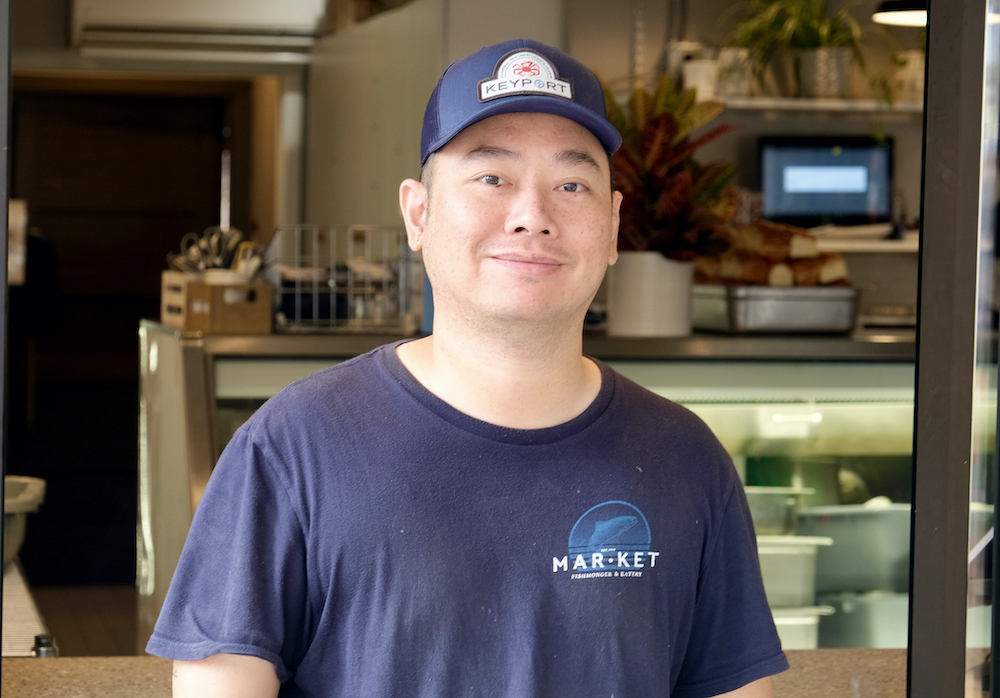 With lobster being flown in daily by Inland Lobster, located in Portland, Maine, it wasn’t easy keeping up with demand. “We would run out in the beginning, and we had to eighty-six the sandwich,” says Hans. “But now we know about how much we need for each day.”

Having consistent demand on both weekends and weekdays makes that much easier. There are fluctuations, like the Tik-Tok video last March that amassed over 200,000 views, or the post to Seattle Foodies on Facebook with its 26,000 members. But for the most part, demand spiked and never subsided. 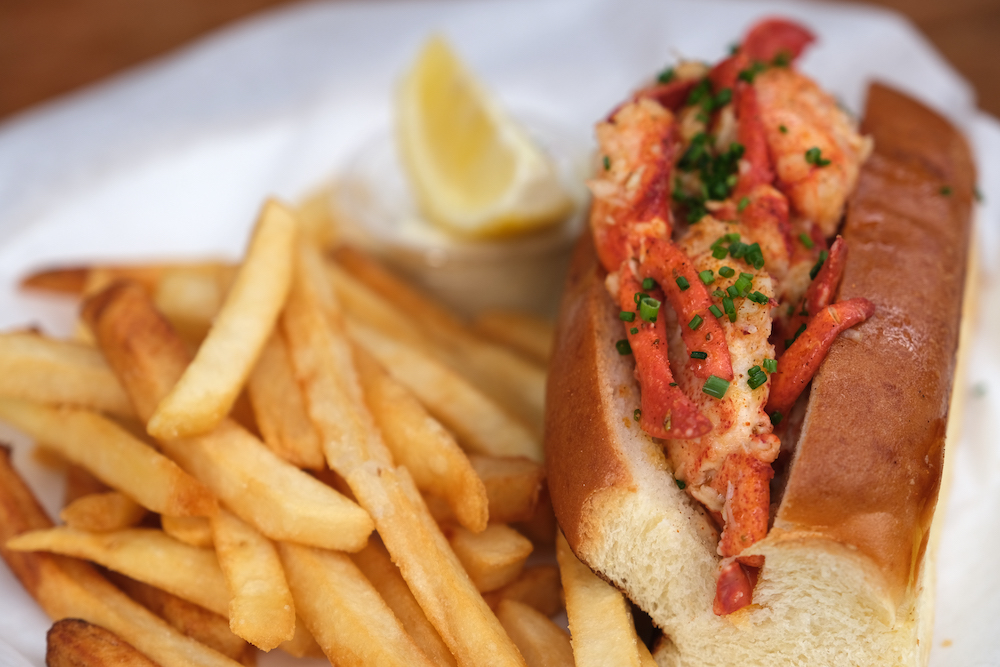 Market’s lobster rolls are served two ways, cold (Maine) or warm (Connecticut). The essential ingredient, in both cases, is a healthy portion of really fresh lobster, including both claw and tail meat. The roll is Macrina’s Brioche Roll, brushed with house aioli and crisped. The warm version features lobster warmed in garlic butter, Old Bay Seasoning, and fresh chives. The cold version has a cold lobster salad with brown butter topped with chopped celery, gherkins, and Old Bay Seasoning. Both are served with fries and housemade tartar sauce.

The Dungeness Crab Roll, also $29, is nearly as popular as the lobster rolls. Local Dungeness crab meat is tossed in brown butter and served on a crisped Macrina Brioche Roll and sprinkled Old Bay Seasoning and chives.

Market’s Fish & Chips may not be the item everyone is talking about right now, but they’re worth seeking out. Local rockfish is beer-battered and served perfectly crisped and not at all soggy with oil. They’re served with fries, lemon, housemade tartar and minty mushy peas. “We make them the traditional British way on that fish,” says Hans. “They’ve been doing it for a long time. We respect that, and it makes sense.” 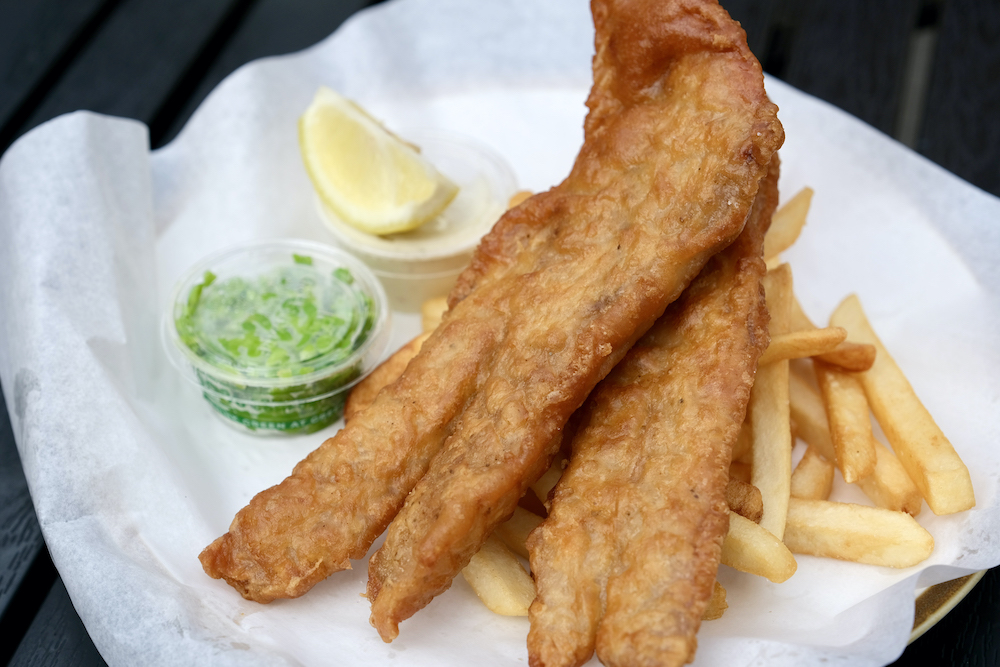 Seattle-based seafood lovers can now skip the drive north and head to their new outpost in the Seattle Art Museum. Located in the space formerly occupied by Taste, Market Seattle serves a very similar menu but has added banh mi served on Macrina’s Bui Buns, and Macrina pastries, among a few other new offerings. There is also a full bar featuring both draft beer and wine. The restaurant seats approximately 60 people.

Market is part of the Feedme Hospitality and Restaurant Group that includes, among others, the celebrated Edmonds restaurants Salt & Iron, Fire & the Feast, Bar Dojo, and SanKai Sushi. In addition to the restaurant, Market Seattle provides catering services at the downtown museum, the Olympic Sculpture Park and the Asian Art Museum.

St. Macrina, our patron saint, was known for working to improve the quality of life for people in her community, and we strive to do the same. On our first Thanksgiving, back in 1993, Leslie brought some extra loaves to the Noel House, which was located in a nearby alley. “The ladies there were so appreciative of the fresh baked bread it brought me to tears,” says Leslie. Our mantra became that of St. Macrina.

We enrich our communities through the joy of artisan baking, but we also donate directly to non-profit organizations that do outstanding work supporting members of our community. Our employees frequently join us in donating, and we match each of their donations.

As part of our celebration of Juneteenth, we donated $2,500 (including matched donations from employees) to Community Passageways. In September, we are donating $2,000–$3,000 to three additional local community organizations including: Helping Link, Plymouth Housing, and St. James Cathedral Kitchen. Here’s a bit more about these incredible organizations:

This community-based, black-run, black-owned organization was founded in 2015 by Dominique (Dom) Davis. They work primarily with court-involved young people of color and help break the school-to-prison cycle with a school-to-life pathway by restoring lives, nurturing dreams, and developing life skills. In the last five years, Dom and his team have helped divert over 120 years of prison sentences. 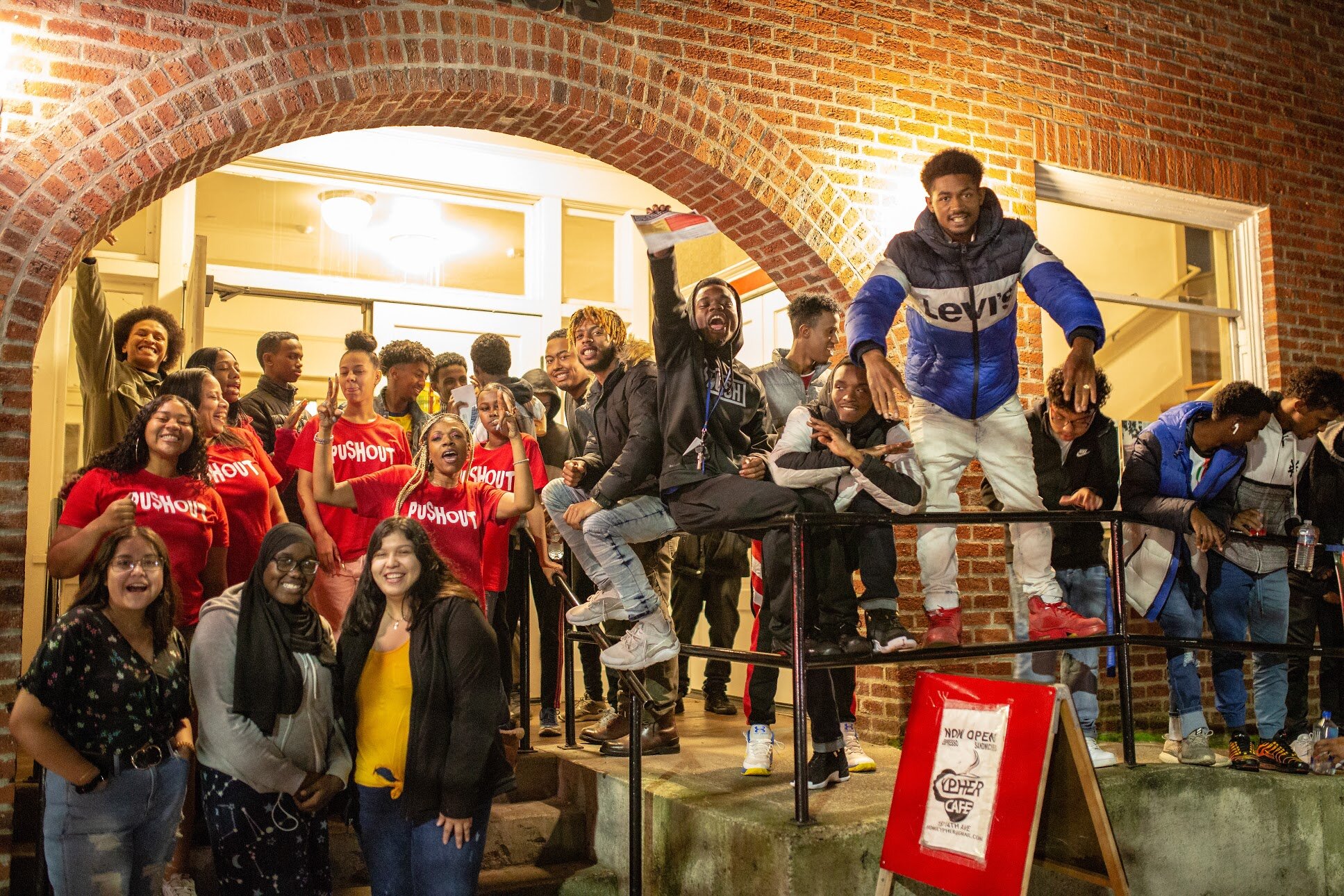 Since its founding in 1993, Helping Link has supported our local Vietnamese community with free services and programs such as citizenship classes, a computer lab, English classes, and much more. They help foster cultural resilience and empower members to celebrate their histories and traditions. 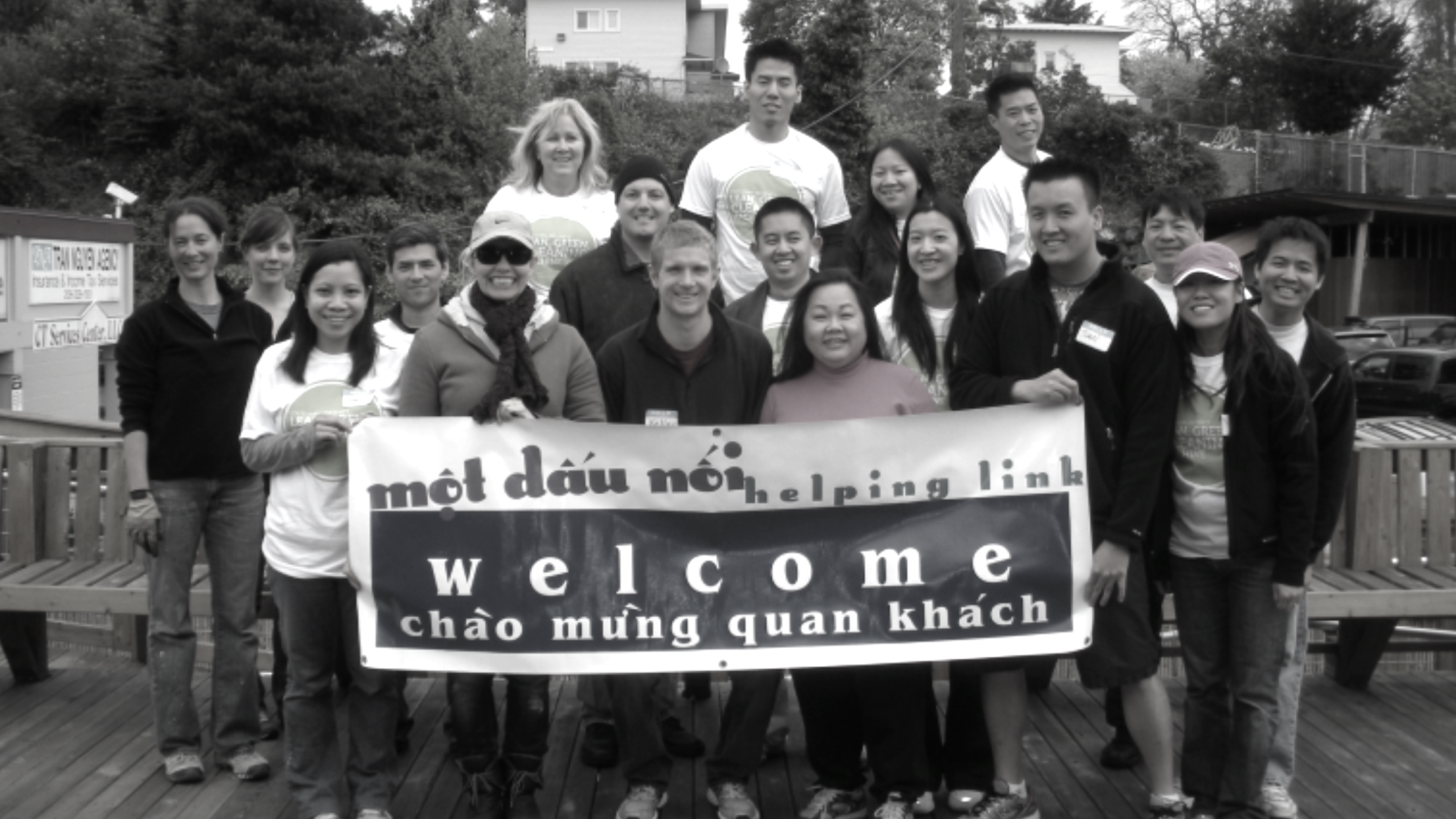 Since 1980, Plymouth Housing has helped Seattle break the cycle of chronic homelessness by providing adults experiencing homelessness with opportunities to stabilize and improve their lives. Plymouth follows the “Housing First” philosophy, operating on the principle that people cannot improve their lives until they have a safe, stable place to live. Plymouth owns and operates 14 buildings, both renovated historic properties and new construction, from South Lake Union to the International District. In the coming years, Plymouth plans to build an additional 800 apartments. 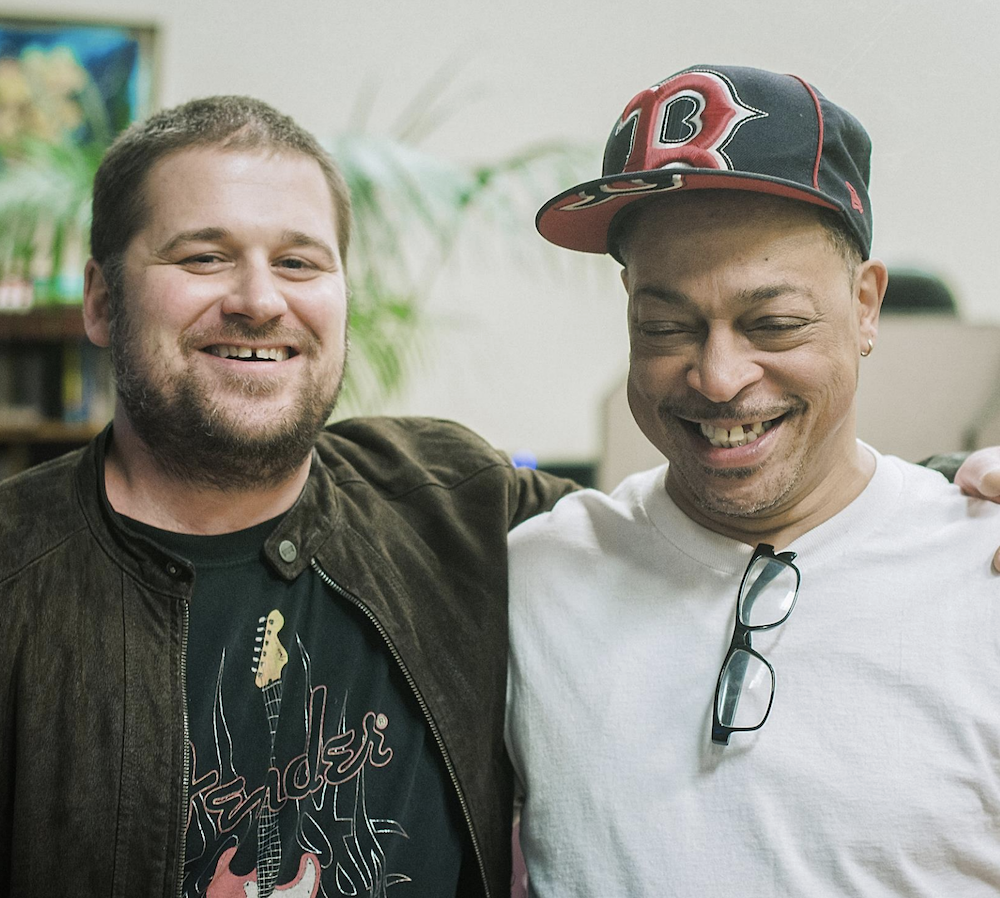 The Cathedral Kitchen feeds a nourishing, hot meal to 150 guests on Seattle’s First Hill every weekday. They serve anyone in need, regardless of age, gender, or creed. Throughout the pandemic, out of concern for their guests, they switched to to-go dinners and a bagged lunch their guests could eat the next day while still providing a limited number of physically-distanced tables for those needing a moment of shelter. 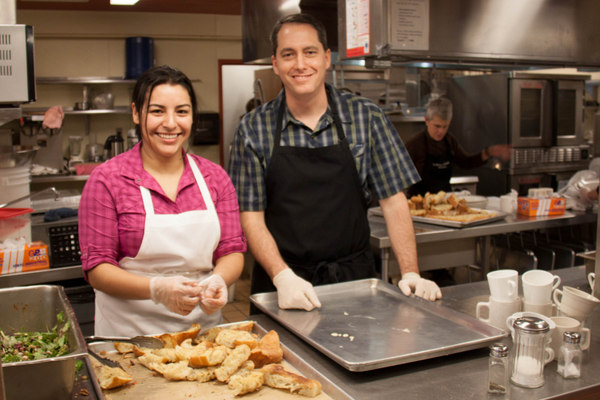 In addition, Macrina donates thousands of pounds of bread and pastries to local organizations that help feed those in need, including The Salvation Army, Alma Mater in Tacoma, El Centro de la Raza. Over the next few weeks, we’re also donating over 300 meals to Helping Link and St. James for fundraising events.

“Donating to these organizations is just one way Macrina supports our communities and works to better achieve our mission,” says Scott France, Macrina’s President. 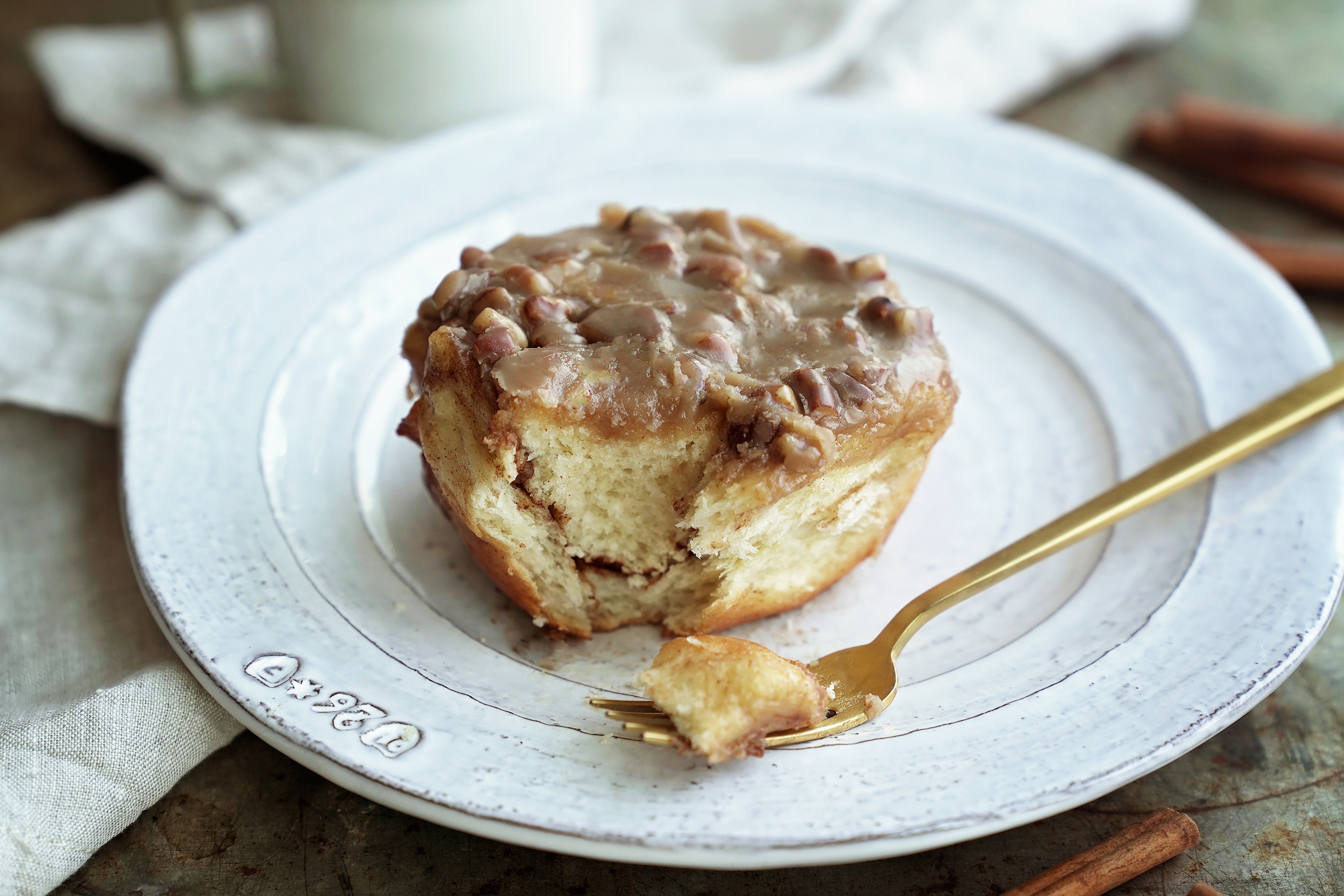 After years of customer requests, we’re launching our own based on Leslie’s recipe for her homemade brunch favorite. We make them by layering our slightly sweet and pillowy brioche dough with toasted pecans and cinnamon sugar, tightly rolling it, then baking it upside down on a rich brown sugar and butter caramel with orange zest and vanilla. We invert the rolls while still warm, causing deep swirls of caramel to run through the bun leaving the pecans gooey and proud on top.

The silky not-too-sweet roll has a light, tender crumb that provides a divine contrast to the toffee-like caramel and crunch of toasted pecans.

The Pecan Sticky Buns are available individually in our retail cafés and as a four-pack. They are best served warm (5–8 minutes in a 325°F oven).

During the long PNW summer days, our favorite cooking method is outdoor grilling. Cut from the chuck (shoulder), the blade steak has excellent marbling and is flavorful and tender. A line of gristle runs down the center, so it’s important not to overcook it, otherwise it will get chewy. If you use an instant-read meat thermometer and are attentive, you’ll fall in love with blade steak. In this recipe, we prepare the steak with a Shawarma spice dry rub a day in advance. Since you can prepare the rest of the meal ahead, you only need to grill the steak and bread and assemble the plates when it’s time to eat. If you can, enjoy the meal with a glass of your favorite wine, a few friends and the rich light of a long summer evening. 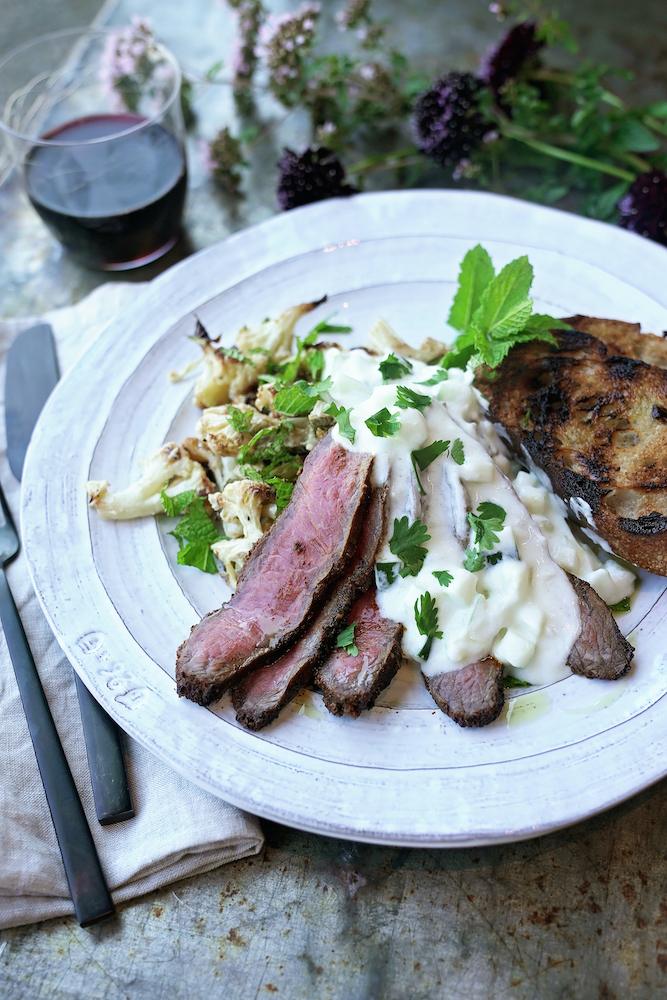 BLADE STEAK
Combine the dry ingredients. Rub the mix into both sides of the meat. Drizzle with olive oil and use your fingers to rub it over the meat. Place the meat in a covered container and refrigerate overnight.

Halve the cauliflower and remove the core; coarsely chop or break it into 1 to 2-inch florets. Place the florets in a large bowl and toss with the scallions, olive oil and 2 tsp garlic. Spread the florets on the prepared baking sheet. Season with salt and pepper and roast for 35 to 40 minutes, or until tender. Let cool.

Add the roasted cauliflower, mint and cilantro to the dressing. Toss well.

If you wish, season to taste with salt and pepper. Once dressed, allow the salad to rest at room temperature to marry flavors before serving.

GRILLING THE STEAK
Preheat your grill to 500°F. Brush a bit of oil on the hot grill to help prevent the spice rub from sticking.

Grill the blade steak for 5 to 6 minutes on each side. Use an instant-read meat thermometer to monitor the temperature. Remove the steak from the grill at 130°F for medium-rare. Let the steak rest for 5 minutes, then slice thinly.

While the steak is resting, grill the bread. Brush both sides of each slice with olive oil and grill until lightly toasted and marked with grill lines. Place 2 slices on each plate. Divide the cauliflower salad among the plates, top each with a portion of the sliced steak and a generous dollop of tzatziki. Enjoy!