Are you a fan of our fabulous weekend brunch menus and our Bialy Egg Sandwiches? This June our cafes made the switch to using cage-free eggs from Stiebrs Farms in Yelm. With their amazing golden yolks, their fresh eggs look great and taste delicious. We’re very proud to be using them for all of our brunch and café pastry offerings.

Leslie first became familiar with Stiebrs Farms eggs at the grocery store. She was delighted to learn that the eggs that she bought for home use were from Yelm. It was natural to want to use them at our cafes. As eggs age, they lose both flavor and nutritional value. Stiebrs’ proximity to Seattle helps ensure that the eggs we use are as fresh as can be.

Stiebrs Farms was one of Washington’s first cage-free and organic egg producers. Jan and Zelma Stiebrs immigrated to the United States from Latvia with their two children, Anita and Jon in 1949. They made a home for themselves in Yelm and decided to start a farm with just a dozen chickens. By 1953, their hard work had paid off and the farm had enough hens to start selling their eggs door-to-door and later to businesses in Tacoma.

In 1978 Jan and Zelma retired, passing the farm to their son Jon and his wife Dianna. Along with their children, they now employ about 70 people across 800 acres of farmland. The hens all perch in community houses and are outside all day, except when the temperature is too cold.  The Stiebrs own a feed mill and produce all of their feed for the chickens on the farm, using a blend of corn, wheat, soybean meal and oyster shells which help to create a stronger eggshell.  They also employ a nutritionist to make sure that each chicken’s diet is complete. Jon is quick to point out that their source of eggs is self-sustaining; they raise all of their replacement hens.  John is very proud of the quality of his eggs and we are pleased to be using them.

Fire. Cargo net obstacles. Barricades. Rusted out vehicles. Lots and lots of mud. A scene out of some post-apocalyptic nightmare or a pleasantly diverting way to spend a Sunday afternoon? Our staff would say the latter.

During a meeting few months ago, someone (no one can remember who) thought that it would be fun to go on a team-building outing. The Warrior Dash came up, and a week or so later, Scott France was asking who wanted to join in the muddy fun. So a couple of weeks ago, Head Pastry Chef Jane Cho, Wholesale Manager Fanny Alvarado, Wholesale Sales Manager Rebecca Early, Wholesale and Wedding Cake Coordinator Anna Moomaw, Benefits Administrator Christina Gimenez, Scott and Renee France and Matt Galvin ran in this year’s Warrior Dash. The “Macrina Maniacs” as they called themselves steeled themselves for what was sure to be a tough day. The Dash calls itself “as much a mental challenge as a physical one” and the Maniacs agree. Wielding loaves of Macrina baguettes, they ran, crawled, climbed, jumped and scrambled their way over a 3.5-mile course filled with a variety of body-bruising obstacles.

Two obstacles in particular were notable for their difficulty. The Deadman’s Drop was a wall that had small ledges in it for footing about 20 feet high that bowed out slightly at the top. Rebecca said this one was particularly challenging, as you had to throw your leg over the top part of the wall to make it over. The Muddy Mayhem was just gross. Imagine wading chest deep in a chocolate milkshake, except smellier. And muddier.

Both Rebecca and Anna said that it was an extremely challenging course but agreed that they were both exhilarated after the race and were “absolutely” going to run in it next year. Scott saw it was a good chance to get together outside of work and have some fun…even if only one baguette survived the Dash! 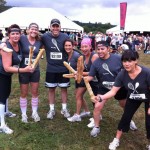 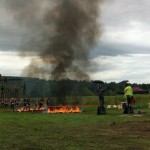 Through the fire and flames…aka The Warrior Roast. 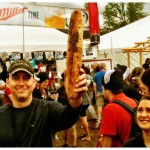