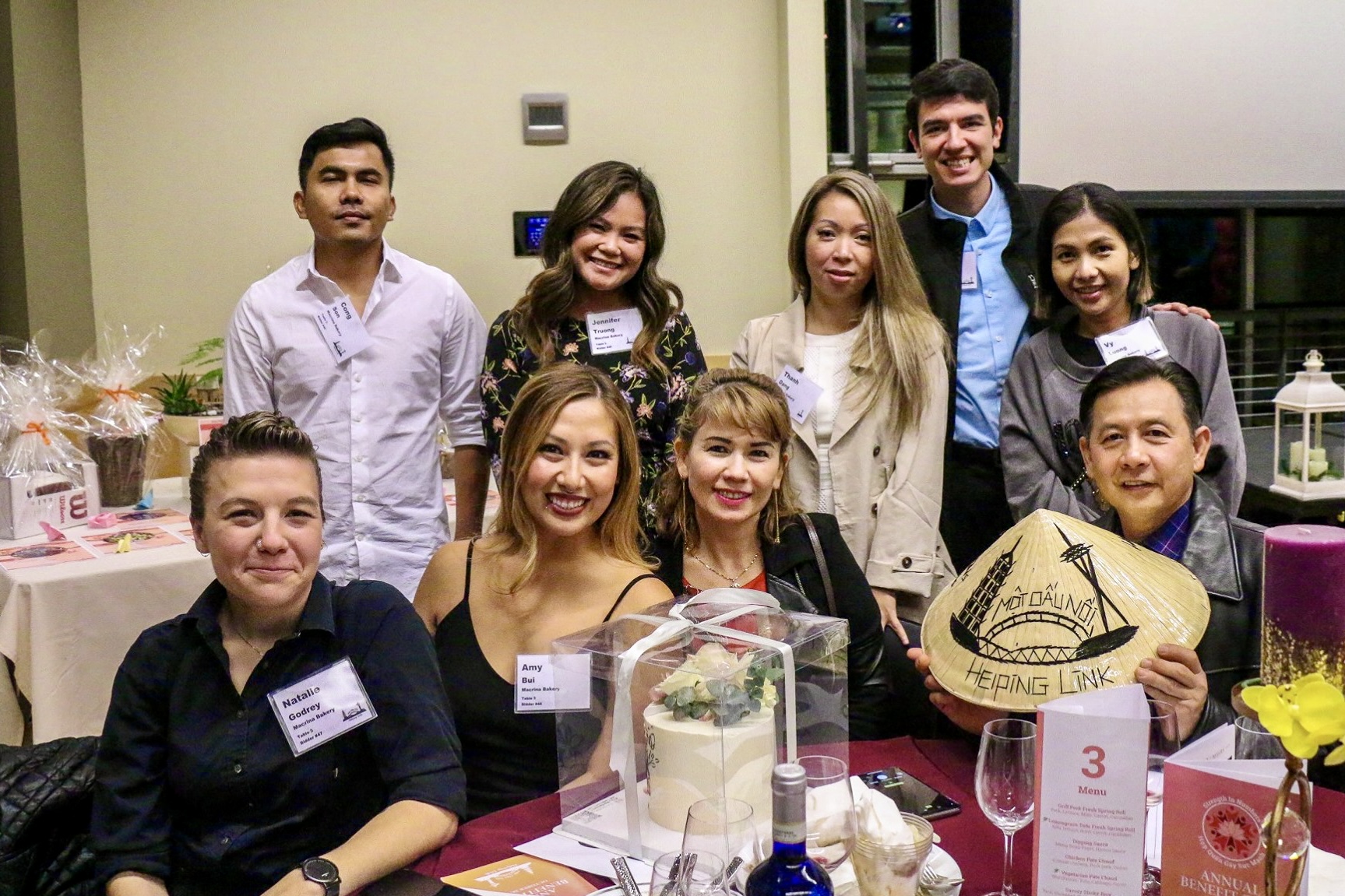 In 1994, shortly after Macrina first opened, Phuong Hoang Bui came to Macrina through the International Rescue Committee. He was a boat refugee and had been trying to get to America from his native Vietnam for years. Eager to work and learn, Phuong quickly became a prized employee. Flash forward nearly 30 years: Phuong is Macrina’s Head Baker—as he has been for over 20 years—overseeing daily the production of thousands of loaves.

Many others of Vietnamese descent have followed Phuong to Macrina, and today you’re as likely to hear Vietnamese on the bakery floor as you are English. Instrumental to our Vietnamese community is the nonprofit Helping Link, an all-volunteer organization that provides free services and programs such as citizenship classes, technology training, information and referral services, English classes, and much more. 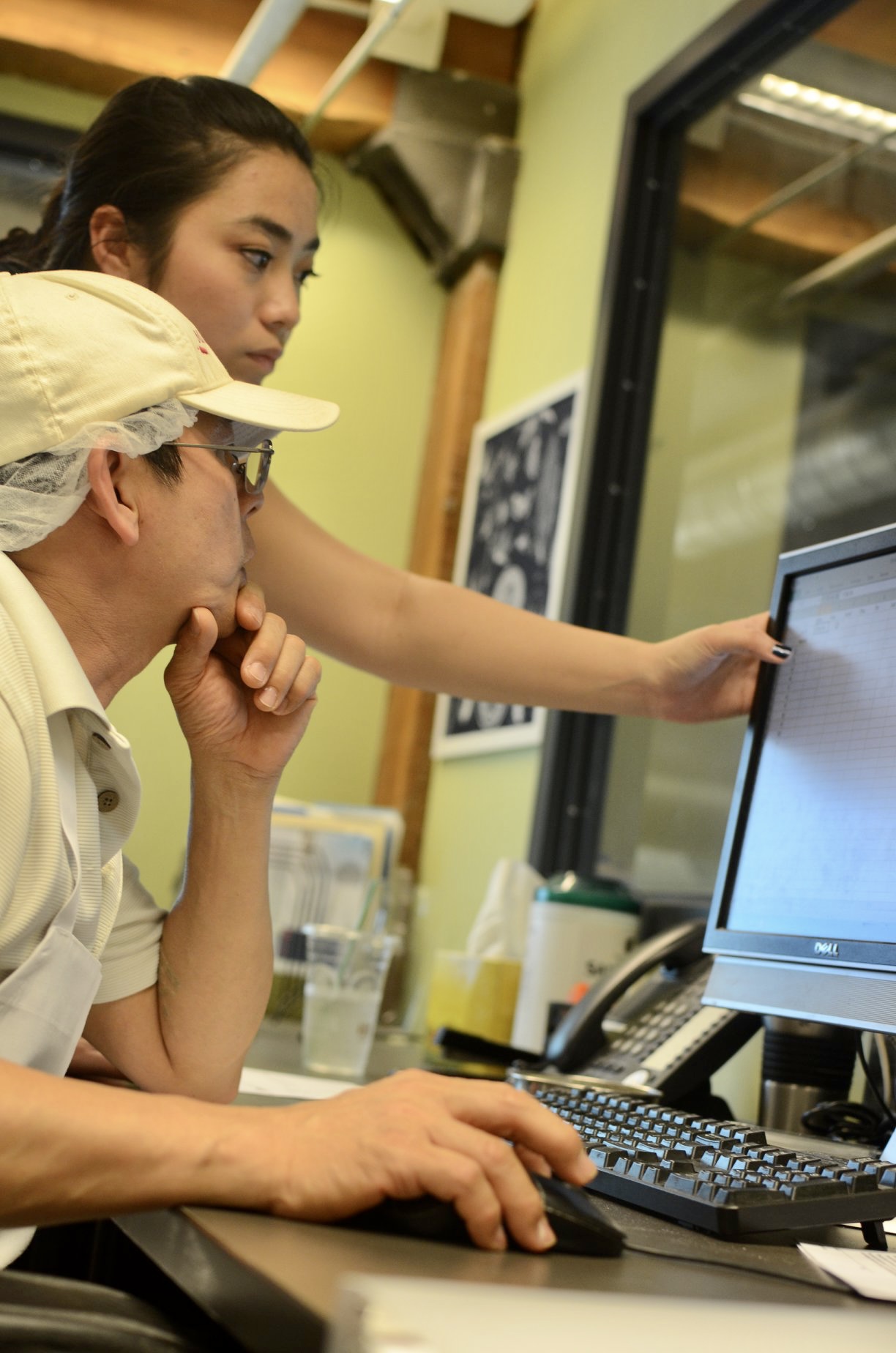 “Minh-Duc, the founder and Executive Director of Helping Link, works tirelessly to accomplish as much as is humanly possible to further their mission,” says Scott France, President and part-owner of Macrina. “The work they do provides vital assistance to the thriving Vietnamese community in and around Seattle. Macrina has been a Helping Link sponsor from the very beginning.”

Minh-Duc Nguyen arrived in Redmond in 1975 as a child. Her family had escaped Vietnam at the fall of Saigon. Sponsors at a local church helped the family get settled. Minh-Duc and her four siblings found the support they needed, worked hard in school, and they all graduated from the University of Washington. In the early nineties, after a trip back to Vietnam, her first, Minh-Duc saw the lack of social services available to new arrivals in America and wanted to do something to help lessen their pain. 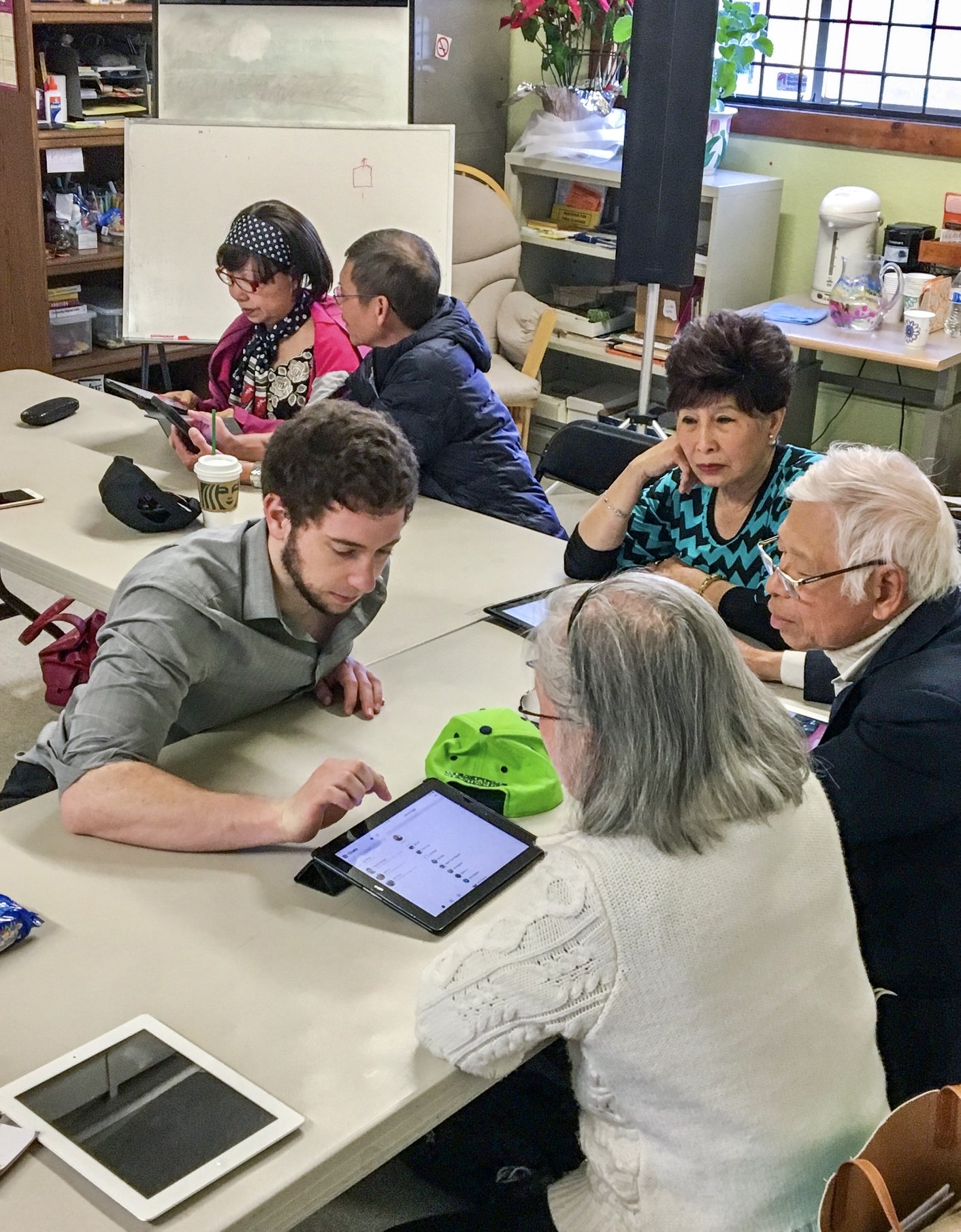 She started Helping Link in 1993, the same year Leslie Mackie opened Macrina. Helping Link began as a drop-in hour to help Vietnamese refugees like herself with translation services. “I recruited two of my Boeing colleagues,” says Minh-Duc. “We were young, idealistic. We helped translate documentation from local agencies for schooling or housing and job applications. Overnight it got way out of hand. We were overwhelmed. Rather than quit, we recruited eight more friends to help.

Needing more space, they secured a room at the Rainier Beach Library that had room for 20. On the first night, over 120 people showed up. The police and fire departments worried there was a major incident.

With so much interest and need, Helping Link eventually secured a space the International District/Little Saigon. Volunteers turned the space into three classrooms and an administrative space. It became a center for Seattle’s thriving Vietnamese community. Today, nearly 40 volunteers—the heart and soul of the organization—teach ESL and technology classes, work as mentors and tutors, provide information and referral services, and host community events. All services are rooted in cultural values of family stability, self-sufficiency, and resilience. Their goals are employment, higher education, fulfilling civic duty, and promoting and preserving culture. 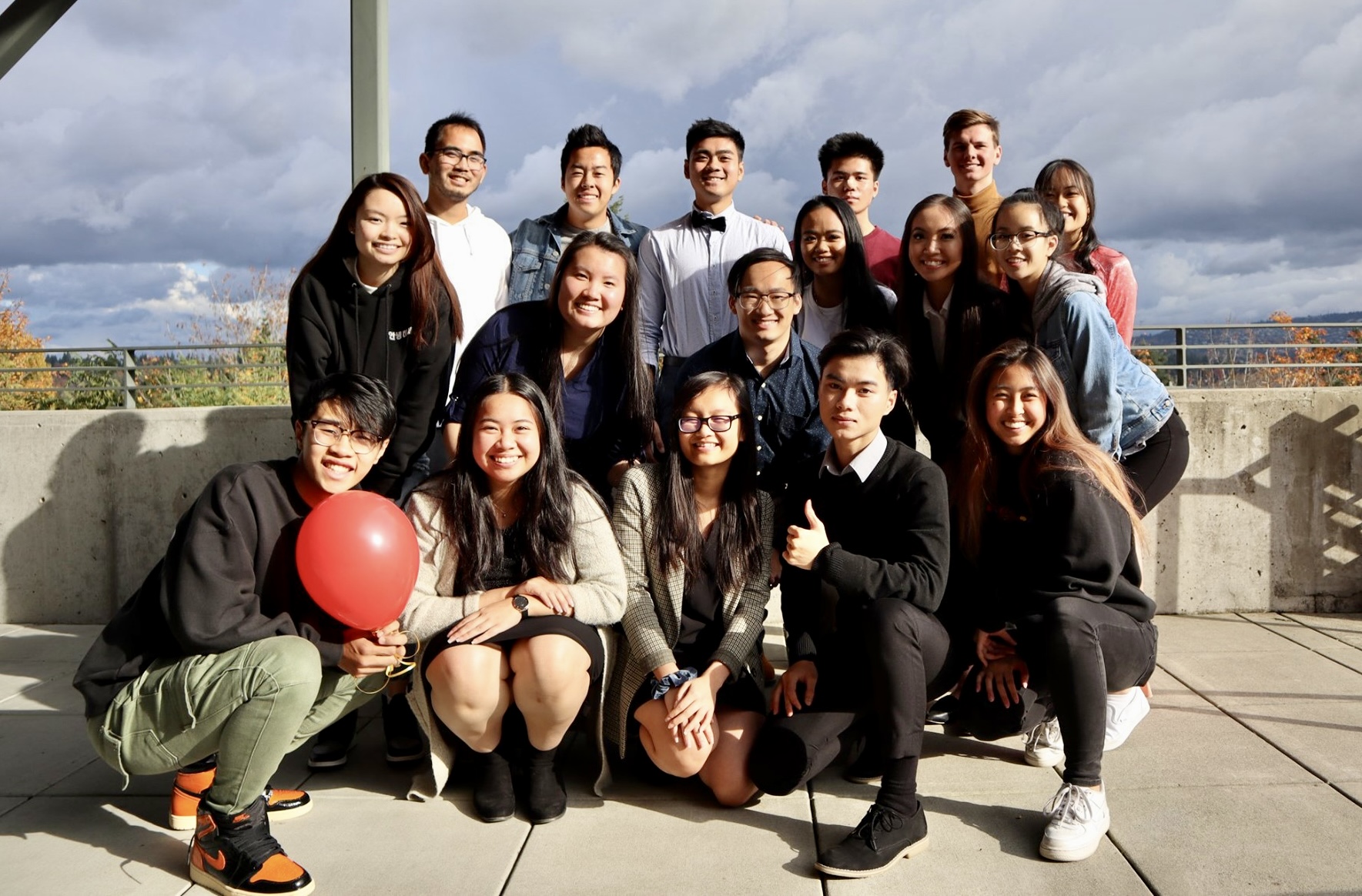 “I’m so appreciative that Leslie and Scott keep investing in the Vietnamese community,” says Minh-Duc. “They brought us to Macrina to teach language skills and basic computer skills for their managers so they can do schedule and email. Macrina was an employer I could see wanted to be there for their employees from the beginning. That’s a huge investment. We work with many companies, and Macrina has been a champion at investing in their employees.”

Helping Link is urgently searching for a new space. After 20 years in Little Saigon, their tenancy was terminated at the end of August due to a sale of the property to a developer. They are seeking assistance to find a welcoming new home in Seattle or King County, as well as relocation support of both time and resources. To get involved, please email Minh-Duc at info@helpinglink.org. 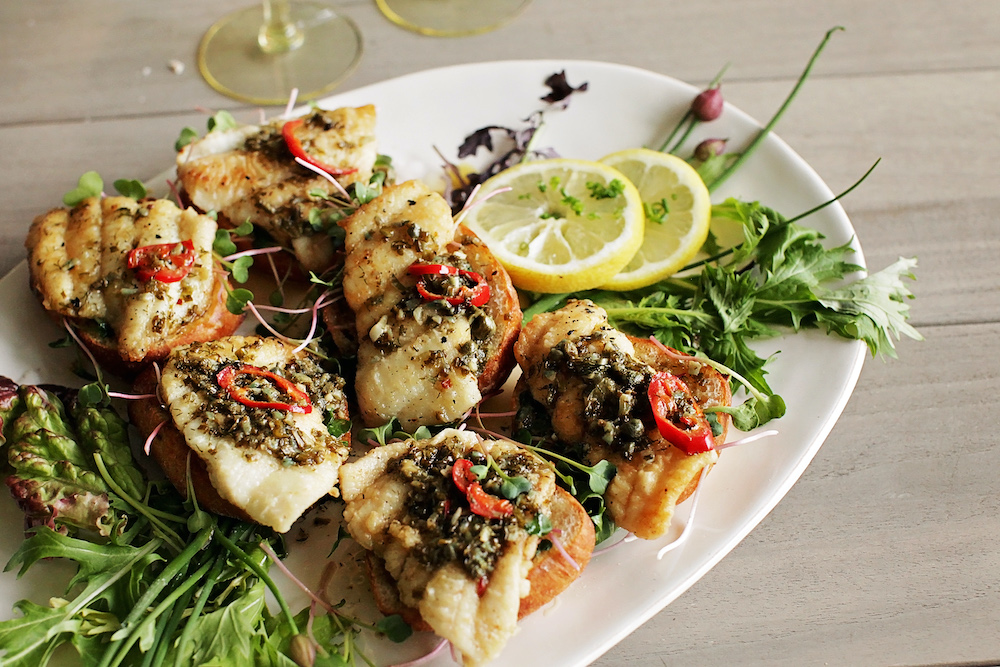 Julia Child loved sole meunière—it’s where her love of French food started. Simple and balanced flavors—mild fish, browned butter, fresh lemon juice—are what make this classic dish so charming. After watching Julia, the inspiring documentary on Julia Child, I found myself craving the dish. I whipped up these open-faced sole meunière sliders with herbs from my garden. The dish comes together in 15 to 20 minutes. Add a salad and a bottle of white wine, and you’ve got a wonderful casual summer evening meal.

Cut 4 slider buns in half and place the tops and bottoms on the prepared baking sheet and set aside.

In a pie pan, combine the flour, salt and pepper. Cut the sole into 8 pieces (approx. 2½-inches each). Coat each piece in the seasoned flour and leave in the pie pan until needed.

In a small saucepan over medium heat, clarify the butter: as the butter melts, it will foam on top, and the whey will fall to the bottom. Watch it carefully. Once the foaming subsides, you should be able to spoon off the clear, golden butter. Set it aside and discard the whey.

Place the baking sheet with the sliders in the oven to warm for 5 minutes.

Add the clarified butter to a large sauté pan over medium-high heat. When the butter is hot and beginning to brown, add the sole pieces. Pan fry them for 1 minute on each side. Place a piece of the sautéed sole onto each of the halved sliders.

Add the chopped herbs, jalapeño and lemon juice to the remaining butter in the sauté pan. Season to taste with salt and cracked black pepper. Spoon the browned butter sauce over each slider. Serve warm with a favorite glass of dry white wine. 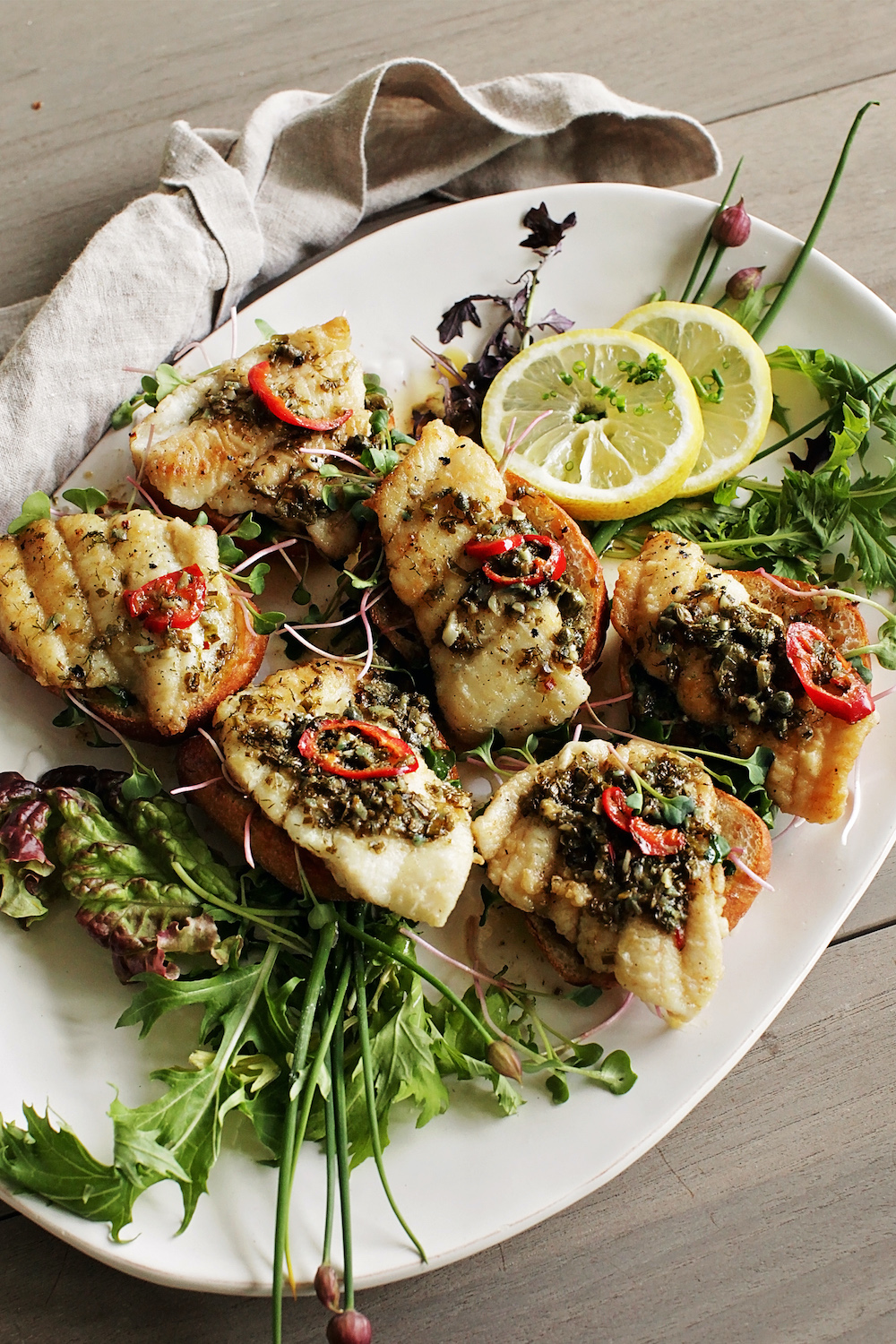