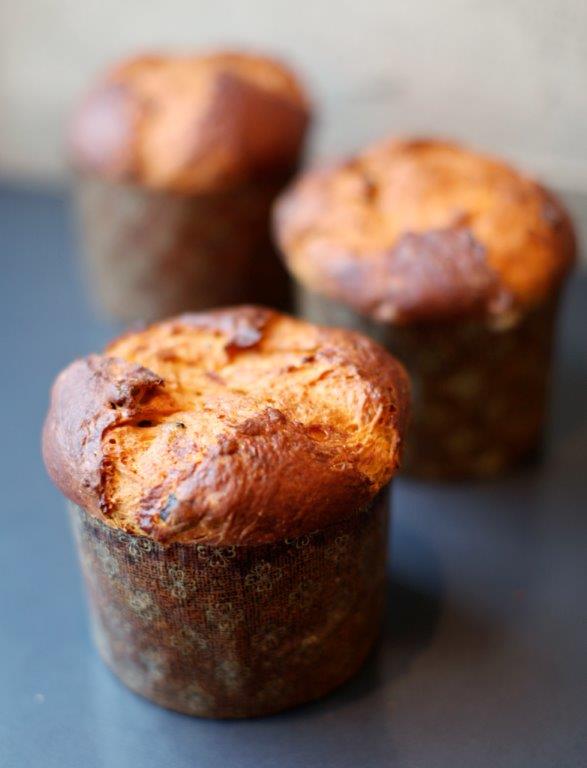 There is hardly a more Italian way of celebrating the holidays than a slice of panettone and a flute of prosecco, a December ritual in homes, cafes, and restaurants throughout Italy. This sweet toque-shaped yeast bread stuffed with raisins and candied orange and lemon peel originated in Milan. It’s often served with a sauce of zabaglione, a custardy sauce made with egg yolks, sugar, and Marsala wine, or crema di mascarpone, and accompanied with a glass of sweet wine such as Moscato d’Asti. The name panettone comes from the Italian word “panetto,” a small loaf cake. The addition of the suffix “-one” makes it a large cake.

The origins of the cake date back to a type of leavened cake sweetened with honey and enjoyed by nobility during the Roman Empire. The cake makes cameo appearances in Italian paintings in the 16th century and is associated with Christmas in the 18th-century writings of Pietro Verri, who wrote an epic history of Milan.

But Panettone didn’t become a household item until 1925 when Angelo Motta, a Milanese baker, began commercial production of the bread. He’s credited with modifying the shape from a low, dense loaf to the tall, airy bread we know today. He introduced a natural leavening process, more like that used in sourdough, and allowed the bread to rise three times over 18 hours before baking. This produces the bread’s lightness and soft texture.

Motta’s bread was an enormous success and soon a competitor arose. Giacchino Alemagna created a similar bread, pricing his higher. The competition proved good for both brands, with Motta seen as the panettone of the middle-class, while Alemagna targeted those willing and able to pay premium prices. Today, the brands Motta and Alemagna dominate the market. Over 100 million panettone are produced by Italian bakeries each holiday season. Italy only has 60 million people! Even with about 10% of production bound for export that is a lot of panettone per person.

While commercial production of panettone dominates in Italy and abroad, many small bakeries (or le pasticcerie in Italy) make their traditional versions of the famous bread. Macrina’s version was inspired by a recipe in Carol Field’s wonderful book The Italian Baker. Our loaf is studded with candied citrus and dried fruits and enriched with eggs and butter. Nowadays it’s easy to find decorative paper baking molds, but I prefer to bake these loaves in clay flowerpots, which look beautiful and make great holiday gifts. The dough takes time and cannot be rushed, but it’s more than worth the wait. If you’re looking for an alternative to the version shipped over from Italy you can pick one up at any of our cafes this month, or find my recipe in the Macrina Bakery and Cafe Cookbook. Then grab a bottle of prosecco and invite some friends over for a very Italian holiday celebration.