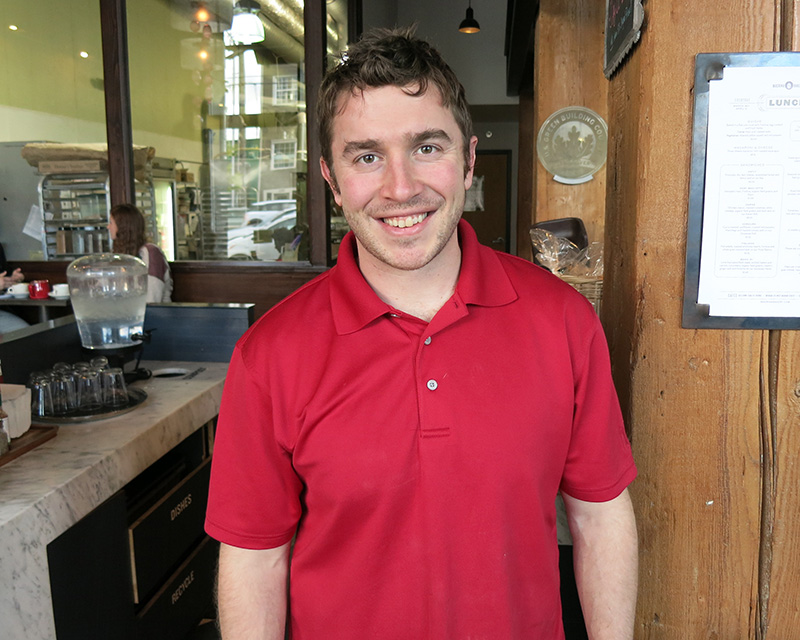 Born and raised in the Deep South, Blake Gehringer proved his knack for culinary arts was no fluke when he landed a pastry chef apprenticeship despite the stiff competition. He settled into a coveted position as head pastry chef at an upscale restaurant in Charlotte, North Carolina. But, fate had different plans for Blake. During a visit to Seattle, Blake fell in love.

“When I returned to North Carolina, Annie sent me a Seattle ‘recruiting’ package. In this package was an application for Macrina Bakery,” Blake recalls. He couldn’t resist the strong pull West and three months later he was back in Seattle, only this time, it was for good. After a brief stint in construction, a term with AmeriCorps, and some time in the donations department at the Habitat for Humanity Store, Annie (now Blake’s fiancée) persuaded him to return to his passion for pastry, gently prodding him with that same job application.

“At this time Macrina required a pastry and baking education, which I didn’t have,” says Blake, who earned his degree in construction management. “I must have made a decent impression on [Production Manager] Jane Cho, though. She gave me a chance.”

For three years, Blake played a pivotal role in Macrina’s Retail Pastry Department at Sodo. But, just over a year ago, we decided to enhance our high food safety standards by forming a dedicated Food Safety Department. With his dedication, upbeat attitude and penchant for leadership, we knew right away that Blake was the person to head up this new team.

Trading a rolling pin for a clip board, Blake now oversees new protocols for impeccable standards in all areas of the company while guiding staff on proper procedures.

“It forces me to wear different hats at any given moment,” Blake says, running through a list of things he documents each day, ranging from allergen control to equipment maintenance. Working with people who are passionate about Macrina and being part of a supportive team makes it all so much easier, he adds.

Since the inception of our new Food Safety Department, Blake has been at the forefront of our Hazard Analysis and Critical Control Point program and helped us excel with top-notch food safety audit scores.

“The best part of my job is being able to interact with all departments on a daily basis. It’s a fantastic community to be a part of. Also, the bread, my gosh the bread!”