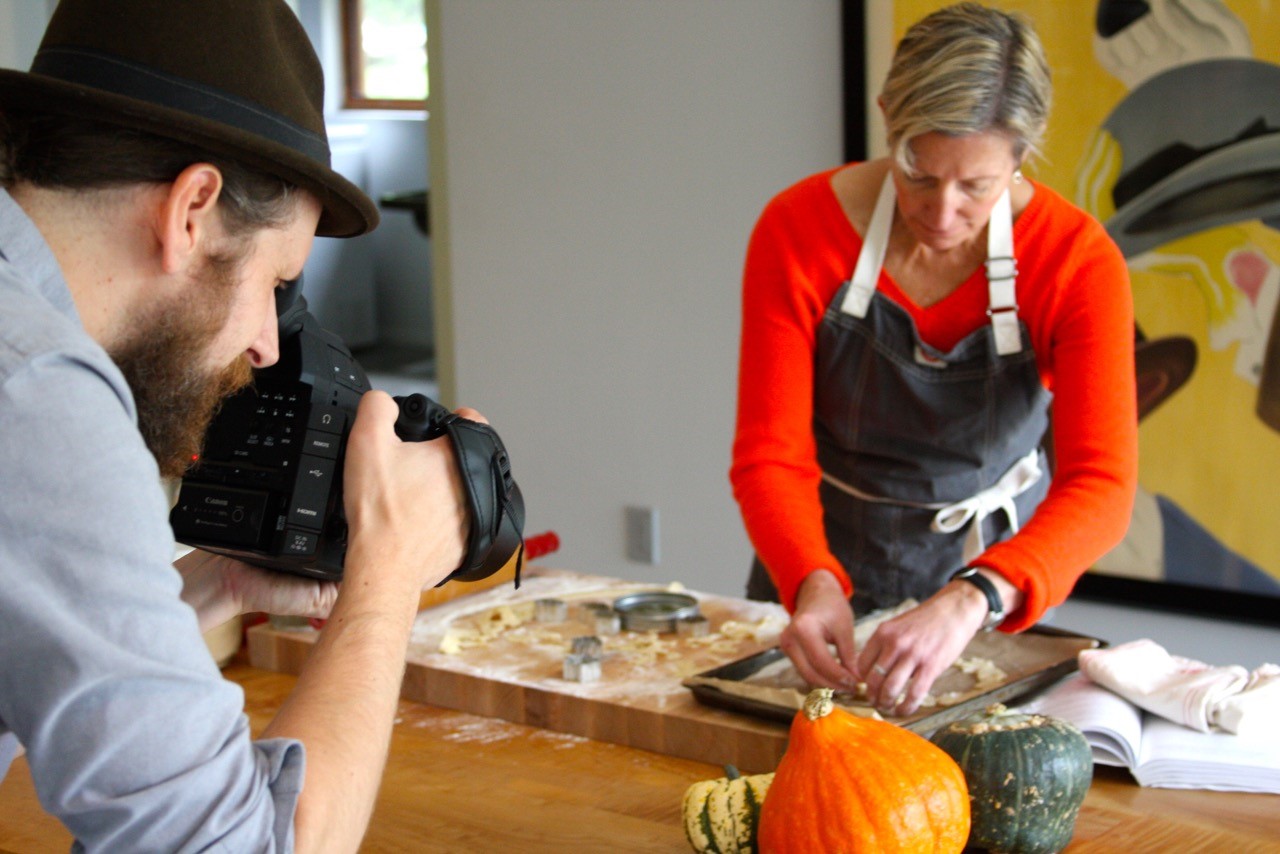 I’m always surprised how much goes into making one of our short videos. Patrick Kehoe, a local director and photographer, has worked with me to produce eight videos so far. We have our rhythm down. Cooking in front of a camera doesn’t intimidate me—especially with recipes I’ve made hundreds of times before—but it’s still a lot of work. I want everything to look just right and to convey the tranquility I feel living out on Vashon Island and to share my love for cooking, especially with vegetables and fruits and edible flowers I’ve grown myself. 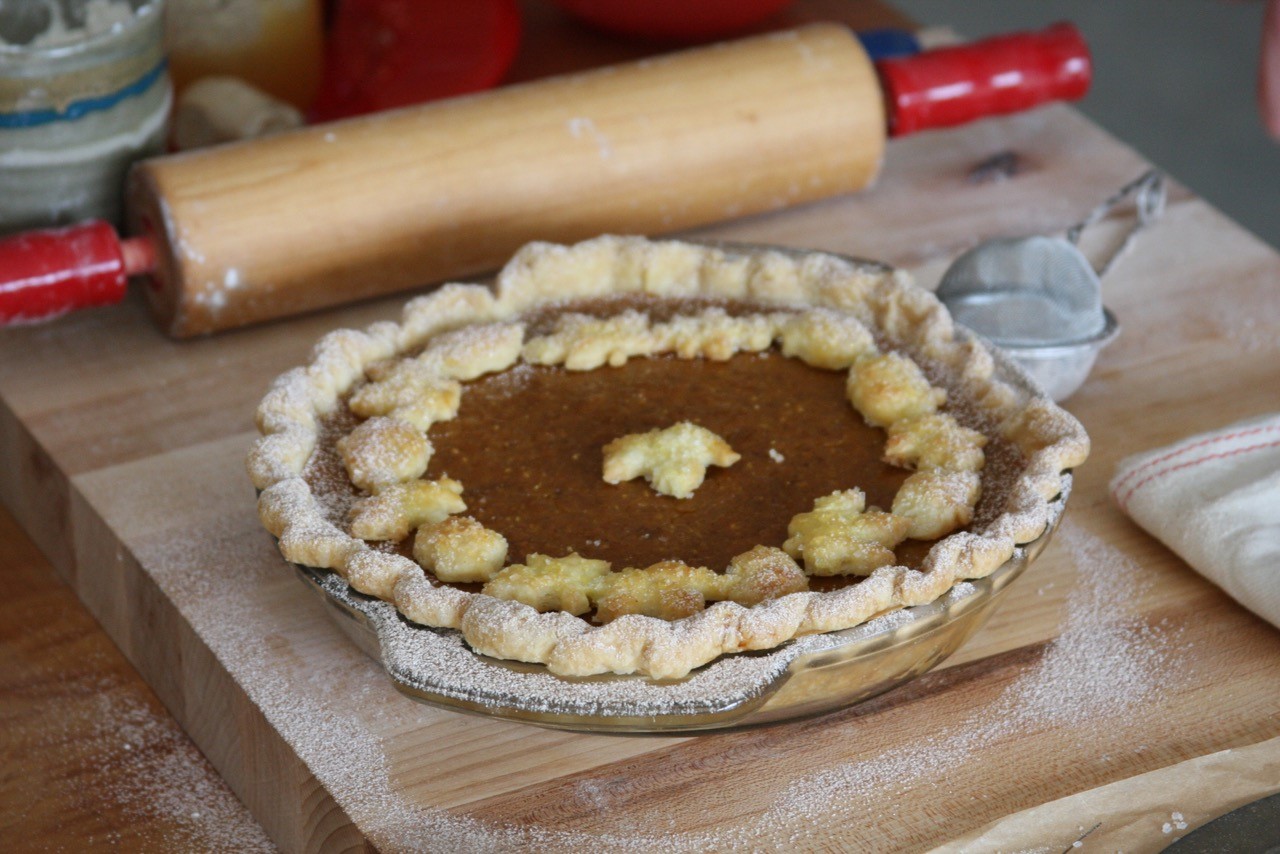 For our fall video I chose pumpkin pie, for the obvious reasons, but also inspired by a beautiful pumpkin in my garden. It still impresses me that this beautiful large squash grew out of one of the dry little seeds I planted in April.

On the day of filming, I woke early—baker’s hours—to get the house ready. The day was overcast, but thankfully not raining, something you can’t count on in October around here. Patrick prefers to film in natural light, so I set up my dining room table near the windows as a work table. I made two recipes of the Flaky Pie Dough from my first cookbook. Since each recipe makes enough for two crusts I’d have plenty extra, just in case. When filming you always need to be sure there is extra. You never know when you might need to reshoot something. Then I set about making one pumpkin pie in advance. Having one finished already makes the shoot go faster. When I put the one I made on camera into the oven, we were able to move right into filming the finished pie.

With my food prep finished I made sure there were eggs in the chicken coop and that nothing had happened to the garden pumpkins. Next I arranged my work table, putting all the tools and ingredients out that I would need. I take great pride in displaying ingredients in colorful bowls and using family dishes collected over the years. The final detail was to instruct my dad, who’d agreed to help, when to get the pizza for lunch. In the past, we’d worked twelve hours without eating. A terrible idea, especially when working with food all day.

Patrick and his assistant Casey arrived punctually at ten with their bags and boxes of cameras. While Casey set up, Patrick and I went over the script I’d prepared. We broke it into nine scenes: fetch eggs from the chicken coop; get pumpkin from the garden; cut, clean, roast pumpkin; roll out the pie dough; bake the crust; make the decorative leaves for the pie with the extra dough; make the filling; bake the pie; cut and serve a slice. With only one dish—the pie—this video was easier than others we’d done.

Before starting each shot we choreograph the action. I explain to Patrick what I’m going to do. We do a dry run to see what it looks like. With our rehearsal done, Patrick sets up the cameras for the shots he wants. As we get going there are lots of pauses, lots of “stand by’s” and “go for it’s.” Often I must repeat actions slowly. Patrick stops to change lenses or cameras, working to get the best shot. He has a remarkable eye, lots of patience, and a great way of talking me through the process. 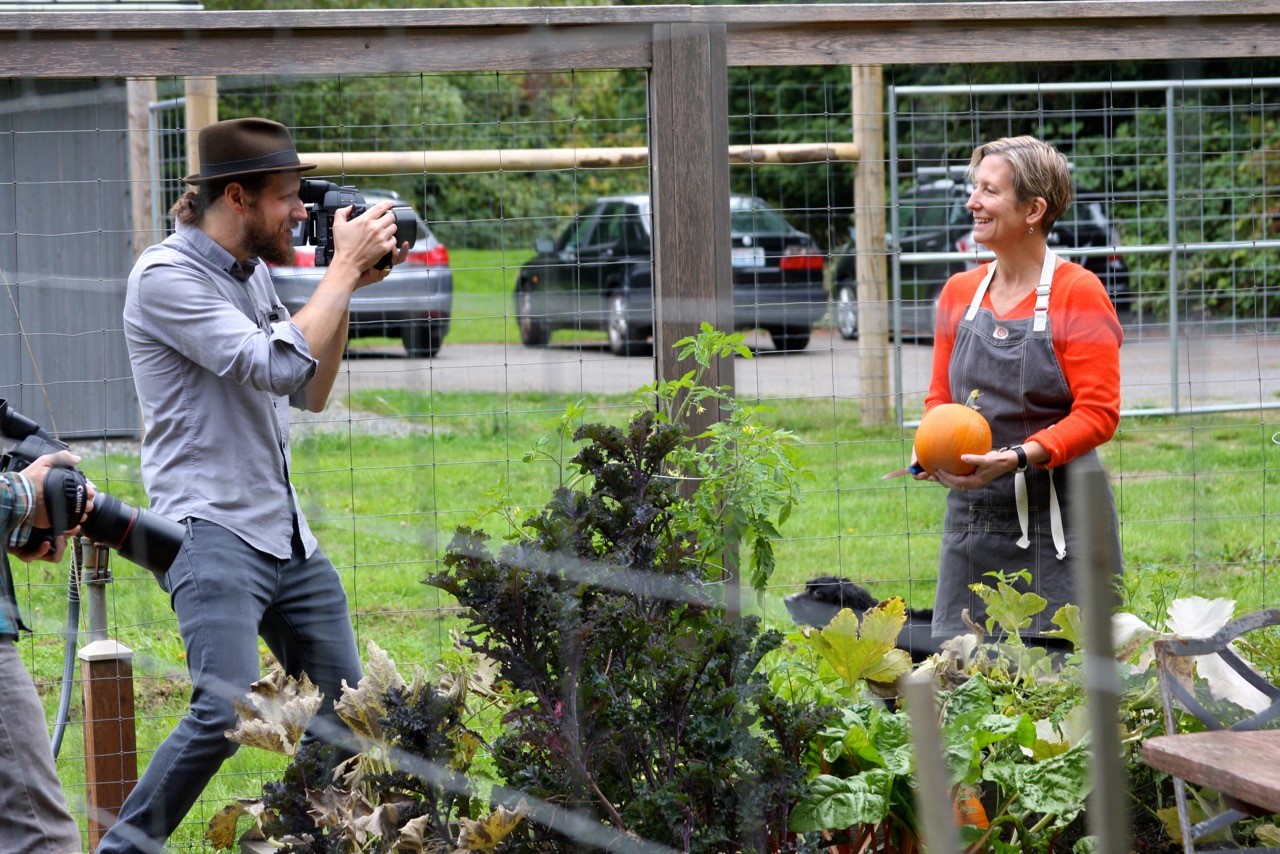 We progressed from the chicken coop to the garden, getting the shots we needed, all with my dog Louis barking. This is life on the farm. Louis doesn’t tolerate visitors as gracefully as my other dog Jasper.  But the extra noise doesn’t matter since we record the sound last. Patrick mixes the audio with the video back in his studio.

By about noon we had the squash cut and roasting in the oven as well as the pie crust when my dad showed up with the pizza—lunch time. After a short break we resumed filming the finished pie, using the one I had baked earlier in the morning. I always fuss with the final presentation and this time was no different. I added some grapes to the plate for color, added the sweetened whipped cream, and sprinkled the plate with a mix of powdered sugar and cinnamon. Then I added one of the leaves I’d cut from the leftover dough and baked. It didn’t look right. Fortunately I had seven more slices. I nailed it on the next one—without the leaf. 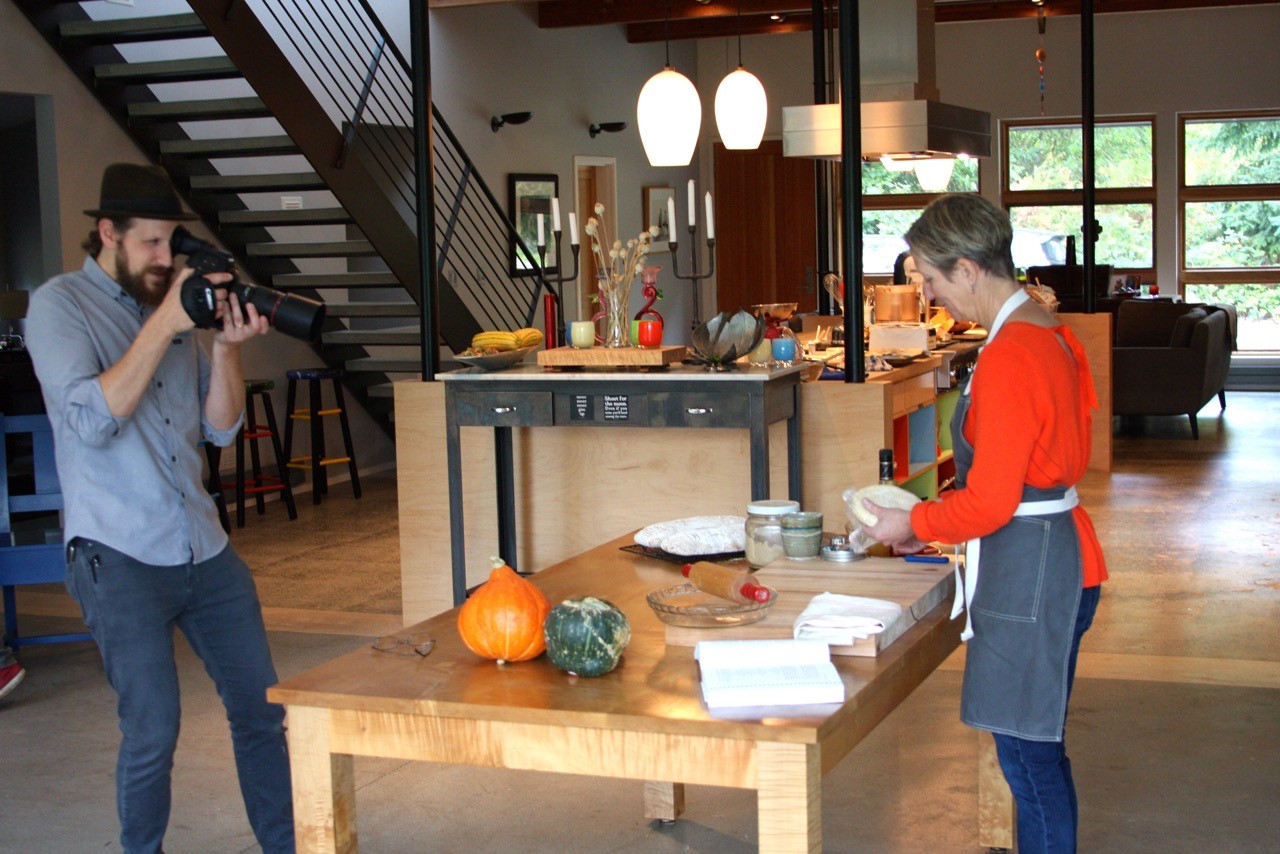 Later in the afternoon we finished filming the filling and had baked the second pie. Only the talking parts remained. Maybe because I’m tired by this point, or because I’m not as practiced at narrating all the details of what I do when I’m cooking, this is always the harder part. I create an outline. This helps me talk more authentically. Patrick is really helpful at pulling out key phrases. While we can do take after take, the more retakes we do the more difficult it feels to me. Sometimes I get too lavish in my descriptions, over-explaining the process, and Patrick has to rein me in. “This is going to be a short video,” he reminds me.

After what feels like too long, my liveliness waning, we had what we needed. Patrick and Casey packed up their gear and I worked on cleaning up the many dishes I’d created, amazed again that it had taken twelve hours to film a four-minute video. But the results were worth it. They always are.